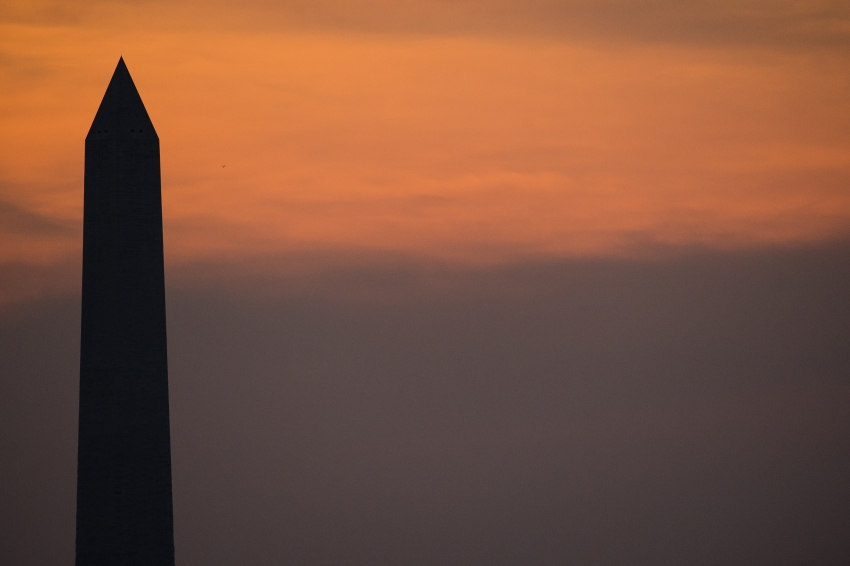 Republicans found a way to make their tax bill into an attack on the climate. (Patrick McDermott/Washington Nationals/Getty Images)

The latest Republican scheme isn’t just bad news for the economy, it will be terrible for the environment.

The bill would extend a generous corporate tax cut to the very industries now careening the planet and humanity toward a hotter, wetter future.

The GOP’s latest tax bill won’t just benefit the wealthy at the expense of everyone else, it will also be horrible for the planet—and not just in the ways you might think. In the Republicans’ bid to pass as many of their long-standing priorities as possible, they’ll also do plenty to cook the planet.

For starters, the bill would extend a generous corporate tax cut to the very industries now careening the planet and humanity toward a hotter, wetter future, namely coal, oil and gas. It would also open up 1.5 million acres of Alaska’s Arctic National Wildlife Refuge for oil and gas drilling. An analysis from Oil Change International released last year found that nearly two-thirds of fuel reserves in existing oil and gas fields need to remain undeveloped to keep the earth from warming beyond 2 degrees, a threshold that itself would mean large-scale climate impacts and severe loss of land in low-lying areas.

The bill could also make it harder for the United States to break its addiction to fossil fuels. Though it wouldn’t eliminate existing tax credits for renewable fuel sources, the legislation could make these credits harder to access. On November 22, a provision many renewable energy advocates hoped would get left behind in the House version of the tax package—the Base Erosion Anti-Abuse Tax (BEAT) provision—re-emerged in the Senate version, prompting a vocal response from solar and wind trade associations. “We normally don’t speak in these kinds of terms, where we talk about collapse of the tax equity market,” a joint letter from several renewables trade associations stated in response. “We’re looking at the end of the principal financing mechanism that has fostered growth of the renewable energy sector since the 1990s.”

The BEAT provision would essentially add uncertainty for investors in renewable projects that they could collect tax equity from Production and Investment Tax Credits, which currently subsidize around a third of wind and solar development. According to a blog post from Keith Martin, a lawyer specializing in tax and project financing, so-called tax equity financing provides around 40 to 50 percent of the funds for the average solar project and 50 to 60 percent for the average wind project.

Were it to be implemented, the BEAT provision would mean that neither renewable energy companies nor their investors could be sure at the onset of a wind or solar project whether they could claim the relevant tax credits as tax equity, threatening to upend one of the primary incentives offered by the government to spur investment in renewable energy. Because the measure would also apply retroactively, Martin told the trade publication Utility Dive that it could cut into tax credit claims on deals “closed as far back as 2008.” (For more detailed explainers on the BEAT provision, see here and here.)

The bill may also lead to a slew of more indirect impacts as well. By overturning the ban on churches and other non-profit groups’ engagement in religious activism, the bill could further empower climate-denying politicians around the country. Religious institutions hold a range of beliefs on climate change and the environment, though a 2015 survey of evangelicals—one of the country’s most influential religious groups—found that just 24 percent think of global warming as “a serious problem.”

Should Congress pass the bill, it would likely lead to a wave of automatic spending cuts—many of which are critical to climate resilience. The already severely indebted National Flood Insurance Program—virtually the nation’s only flood insurance provider, backed by FEMA—would take a $1.6 billion hit. The bill could also eliminate over $100 million from a fund to help clean-up maritime oil spills and several other funds across multiple agencies dealing with coastal and wildlife restoration.

Since Trump took office and announced his intention to pull the United States out of the Paris Agreement, cities and states such as New York and California have emerged as more hopeful venues for climate action than the federal government, and many have already pledged to make bold progress on transitioning to renewable energy. By eliminating the most meaningful parts of the state and local income tax (“SALT”) exemption, this bill could constrain budgets in these states, making climate progress over the next several years more difficult.

Then there are the goodies thrown in for the world’s highest emitters: The super-rich. The current proposal would expand existing tax credits for private jets. According to a new report from the Institute for Policy Studies, an hour of travel by private jet emits more greenhouse gas emissions than the average American does in a year of driving.

Attacks on renewables and giveaways to the fossil fuel industry aren’t the only things that make the GOP tax bill a planetary-scale disaster. As it turns out, transferring massive amounts of society’s wealth from the bottom to the top of the income scale really only trickles down in the sense that it will make most people’s lives worse—and the kind of ambitious action climate change requires much more difficult.