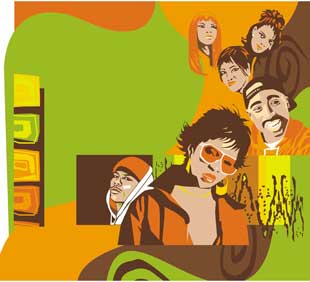 Hip-hop has no standing archives. Like the seminal works of the few who’ve come before—David Toop’s Rap Attack, Tricia Rose’s Black Noise, Nelson George’s Hip Hop America—Jeff Chang’s ambitious Can’t Stop Won’t Stop: A History of the Hip-Hop Generation is constructed more forcibly than most histories through the recuperation of lost objects: personal archives, liner notes, old music videos, and formal interviews as well as everyday conversations driven by the need to feel the culture, the society behind it, the meanings of its beats.

Approaching hip-hop through its founders, artists, fans and activists—all of whom come across as pivotal co-creators—Chang begins by expanding the definition of the hip-hop generation that Bakari Kitwana offered in his important manifesto, The Hip-Hop Generation. Where Kitwana narrowly defined the hip-hop generation as African Americans born between 1965 and 1984—and only rarely looked outward at hip-hop’s non-black American elements—Chang’s own convictions about race, hybridity and polyculturalism lead him to a more encompassing definition. “When does the Hip-Hop Generation begin?” Chang asks. “After DJ Kool Herc and Afrika Bambaataa. Whom does it include? Anyone who is down. When does it end? When the next generation tells us it’s over.”

An almost overly expansive vision imbues Can’t Stop Won’t Stop, the most historically disciplined and chronological of hip-hop scholarship’s founding texts. Almost. Precise visions like Kitwana’s provide explanations rooted in the experiences of hip-hop’s core group, avoiding the distortions that come with a deceptively broad palette. Chang’s wider vision, however, better captures the constant border-crossing and essence-altering nature of hip-hop and its polycultural participants. “A good portion of Public Enemy was jazz improvisation,” group co-founder Bill Stephney chuckles, and Chang exposes the jazzy contingencies running through all of hip-hop as deftly as a beatminer on a world-historical mission.

As theoretical as all this sounds, Can’t Stop Won’t Stop captures the polycultural and sober socioeconomic truths we live by without ponderous analysis. Instead, Chang lets female graffiti writers, white hip-hop activists like William “Upski” Wimsatt, and diverse DJs, breakers and pop stars reveal through their words, biographies and works the unpredictable, multidirectional routes culture takes across time and space.

While Chang spotlights race and class, surprisingly, gender issues, particularly the conflicted position of black women in hip-hop well covered in other studies, get less exposure, despite an illuminating exchange between Ice Cube and Angela Davis. Blacks, and to a lesser extent, Latinos, dominate Chang’s narrative as they dominated hip-hop, but they come across as dynamic, unfinished, and forever forging onwards and inwards, instead of arriving at the block party or MTV’s TRL fully formed.

Social, political and economic developments are harder to track in the jump-cutting collage Chang adopts, in true hip-hop style, for his mostly cultural history. Instead, key breaks typically sped over by other chroniclers receive extended treatment, such as the emergence and struggles of Jamaican reggae, ’70s-era Bronx gang life and its relation to hip-hop, the spectacular rise and fall of Public Enemy, and the depressingly representative story of how The Source went from one of hip-hop’s finest magazines to one of its most compromised.

Hip-hop’s poorly understood history, Chang brilliantly conveys, is of some of America’s cruelest fires, ashes, rebirths and telltale ironies. But in explaining how these tales of destruction and resistance relate—how, for example, converging cultural and socioeconomic factors birthed hip-hop in a “tiny seven-mile circle” in the Bronx—Chang offers all-too-brief explorations fueled by provocative suggestions, reporting and street intuition. He is instead at his best breaking hip-hop down in a language infused with the culture’s own rhythms and sounds:

Each time a b-boy or a b-girl stepped in the cipher, they wrote their own generational narrative. Starting upright in the top rock…feet moving side to side like Ali in a rope-a-dope, dropping down like James Brown…the entire history of the hip-hop body in a virtuoso display of style.

This isn’t to deny Chang’s connections between, say, chronic underfunding of the inner city and the manifold ways in which, as Tricia Rose put it, “Hip-hop style is black urban renewal.” But to build it up to a more nuanced, undisputed defness, the cipher falls to future hip-hop historians.

Chang wants it no other way. He has written what is now hip-hop’s authoritative master narrative, as idealistic and realistic as it needs to be. “It’s but one version, this dub history,” he writes in his preface. “There are many more versions to be heard. May they all be.” One of the first, strongest members of a school as unaccredited as the culture under study, Chang still welcomes his work’s infinite ruptures: new facts, new interpretations, new bass lines of theory and samplings of empirical signs. And in that sense, as in so many others, Can’t Stop Won’t Stop is hip-hop.

Yet there is a subtle, progressive pull to Chang’s narrative, a sense that history moves, like hip-hop records, through loops that extend the culture’s invitation to anyone listening closely enough: “one world under a groove, beyond race, poverty, sociology and geography.” The book ends with a little-noticed march by hip-hop activists at the 2000 Democratic National Convention in Los Angeles. Rallied by the boondoggle of a $200 million high school built atop toxic oil wells, 1,000 non-violent protestors—accompanied by a hip-hop band—raised their fists before the Ronald Reagan State Building. Anger and disillusionment with decades of unjust policies, Chang shows us, transmuted into a single, dignified act of defiance.

To the hosts of analysts, pols, activists and hip-hop heads lost amid Bush’s America, Chang’s final message is clear: Drafting the so-called hip-hop vote into the Democratic Party and holding inflated Hip-Hop Conventions every few years are not enough. For in the end as in its beginnings, hip-hop’s deepest promises lie not in top-down institutions, but the restless, everyday movements of a people marching to politics, beats and rhymes that can’t stop, won’t stop, ’till the future catches up with the collective dreams of our painful, but forever hopeful, past.

Kevin Y. Kim is a writer in New York. His work has appeared in The Nation, L.A. Weekly, Far Eastern Economic Review, and elsewhere.