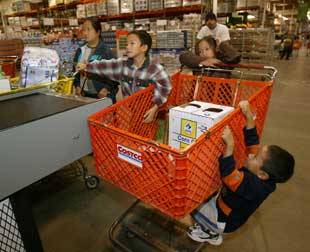 The line for food starts forming at 7:30 each morning. Mostly women, many small children and some single men are shaking off daybreak’s chill hoping to be one of the first 100 people let into the Storehouse, New Mexico’s largest emergency food pantry. It isn’t that this free food distribution center, located just off Albuquerque’s historic Route 66, is stingy; it’s just that the Storehouse has enough donated food to feed only 100 families per day.

“In 1999, we served the equivalent of 200,000 meals each year,” says Lee Maynard, the Storehouse’s executive director. “Right now, we’re serving 1.4 million meals per year, 45 percent more than last year. Things are getting worse.” And if the Republican majority in the U.S. House of Representatives has its way with essential safety net services like the food stamp program, things will be getting much worse for Maynard and thousands of his counterparts at emergency food sites across the nation.

To comply with President Bush’s budget proposal, which includes tax cuts for the wealthy and more money for the Iraq war, both houses of Congress issued separate budget resolutions that prescribe how much money each of its committees must cut. Where those cuts will come from is up to the respective committees. For instance, the House and Senate agriculture committees oversee tens of billions of dollars in expenditures for programs like conservation, food stamps and crop subsidies for commodities like corn, wheat and cotton. According to their respective resolutions, the Senate Agriculture Committee is required to cut $2.8 billion over five years from these programs while the more aggressive House must chop $5.3 billion. Whatever differences emerge between the two committee’s budgets—and there will be differences—will be resolved by a House and Senate conference committee.

So where will the cuts come from? The president’s budget showed uncommon courage by proposing a much-needed limitation on crop subsidies, considered sacrosanct by American agriculture’s commodity producers. Republican congressional leaders don’t appear to be so bold. Rather than face the ire of the likes of the American Corn Growers Association, House and Senate leaders may find it easier to meet their budgetary reduction quota by cutting food stamps, a program whose recipients don’t have access to the well-heeled lobbyists of “Big Ag.”

Bush did propose a $600 million cut in the food stamp program over five years. While not a kingly sum by Washington standards, it’s still enough to eliminate 300,000 lower-income Americans from the nation’s most important nutrition program. But Senator Saxby Chambliss (R-Ga.), chairman of the Senate Agriculture Committee, and Rep. Robert Goodlatte (R-Va.), chairman of the House Agriculture Committee, may not be content with making only 300,000 people hungrier. Both chairmen have made statements to the press indicating that a disproportionate amount of agriculture program cuts will come from food stamps, especially if a conference committee favors the House’s higher budget resolution figure.

The impact of such cuts on lower-income families would be enormous. Created by executive order in the early days of the Kennedy administration, the Food Stamp Program is far and away the nation’s most important safety net. For millions of households, food stamp benefits—now encoded on an electronic card that can only be used to purchase food at retail food outlets—are literally the only thing that stands between them and hunger. According to the U.S. Department of Agriculture (USDA), the number of people who receive food stamps now stands at 25.5 million—2 million more than just a year ago. Are these freeloading welfare cheats? To the contrary, about half of all food stamp recipients are children and about two million are elderly. The average food stamp benefit equals $1 per meal per food stamp recipient. Hardly enough for that filet mignon food stamp shoppers are so often accused of purchasing.

At the same time that Congress is looking for ways to cut benefits for the most needy, the Senate wants to provide $129 billion in tax cuts over the next five years to households making more than six figures (the House tax cut target is a miserly $106 billion). To put these tax cuts in perspective: According to the Center for Budget Policy Priorities, if the full $5.3 billion in program cuts recommended by the House came out of the Food Stamp Program, this reduction would equal half the benefits that households with incomes over $1 million would receive by extending the current capital gains and dividend cuts through 2010.

The cuts would also unreasonably increase demands on private charity. “If people lose food stamps, the first place they’ll show up is emergency food programs, which are already overburdened,” says Gina Cornia, executive director of Utahns Against Hunger. Utah, which would lose $26 million in food stamp benefits over five years if the full House cut goes through, is ranked by the USDA as having the fifth highest rate of hunger and food insecurity in the country. Like other food banks around the country, Utah’s rely primarily on donations of food to serve needy families. In fact, Utah’s emergency food system spent only $106,000 in cash to buy food for its warehouses in 2004. But food donations have been flat for some time now, says Cornia, who simply can’t imagine how food banks would provide an additional $26 million worth of food to people who formerly relied on food stamps.

Two thousand miles away on Ninth Avenue in New York City, more than 1,100 hungry people line up every day at the Church of the Holy Apostles, one of the largest of the 1,300 soup kitchens and food pantries serving New Yorkers. Echoing the alarm sounded by his Western counterparts, the soup kitchen’s director, the Rev. Bill Greenlaw, recently told the New York Times, “It’s a desperate thing. Every level of government seems to have the same mantra, that these programs are vulnerable.”

The president wants budget cuts, tax cuts and more money for the military. Republican congressional leaders will follow their president. The Senate may try to minimize the pain inflicted on the poor with severe but less drastic cuts on food stamps, while the House, led by Rep. Goodlatte, appears more interested in protecting crops subsidies than worrying about the hungry. In the meantime, Maynard, Cornia, Greenlaw and thousands of other emergency food program operators and anti-hunger advocates see nothing but longer lines and more pain.