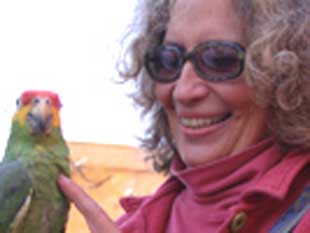 Susan Plum is challenging the Mexican government’s massive failure to effectively investigate and halt the killing spree in Ciudad Juárez, Mexico, which has taken the lives of more than 370 women in the past 12 years. Plum, an artist who lives and works in San Miguel de Allende, Mexico, has decided to shed light on the mysterious string of female abductions and murders—one candle at a time.

Last summer she began circulating via e-mail the idea for “Luz y Solidaridad” (“Light and Solidarity”), an art project that calls for people everywhere to help her “bring light to Juárez, especially to the mothers and the families of the young women and girls who have been murdered.” The installation exhibit and performance, set to open February 4, 2006, at the Museo de la Ciudad in Querétaro, Mexico, will incorporate photographs of votives that have been lit all over the world for the women of the Mexican border town.

According to Amnesty International, 137 of the 370 murders in Juárez and the surrounding area of Chihuahua, have involved sexual assault. Additionally, somewhere between 70 and 400 women and girls remain missing.

Many of the women killed have been abducted near their workplaces—the maquilas (factories) located on the outskirts of Juárez. Kari Lydersen writes in her new book, Out of the Sea and into the Fire, “They disappear while waiting for or leaving the buses that take them to and from work, or after visiting the bars that are popular with maquila workers on Friday nights.” Pervasive machismo and a culture that demeans women are also to blame for the pattern of violence. As National Public Radio’s John Burnett reported, “It’s a common joke [in Juárez] when two men see a provocatively dressed woman, for one to elbow the other and say, ‘She better watch out or she’ll end up in the desert.’”

President Vicente Fox claims that the unsolved murders in Juárez are among his administration’s top priorities. His special prosecutor, Maria Lopez Urbina, has reviewed the state’s prosecution process and found probable cause for criminal investigations into more than 100 Chihuahua state public officials for negligence, omission and related offenses. Despite these findings, the Fox administration maintains that it does not have jurisdiction to preside over official investigations—the cases have been returned to the prosecutors and courts that mishandled them from the start.

To protest these governmental failures, Plum is asking people to join her in a simple gesture to show support for the victims. “In lighting a votive for one of these young women and girls who have been murdered, we will help illuminate a path so that their spirit can move out of darkness into the light.”

Lighting a votive also serves as a solace to the victims’ mothers. “These women stand alone, feeling invisible and abandoned in their community,” says Plum, who this past summer met with three mothers through the Mujeres de Juárez organization. “I feel and hope this act of kindness, compassion and depth will give them a sense of empowerment.”

Plum’s artistic and humanitarian mission is to collect printed and personally signed photographs of everyone’s candles and assemble them into one installation. She intends to showcase large hanging brooms in the space, along with other objects that possess symbolic significance. “Mexico has a long-standing tradition of sweeping,” says Plum. “Women, mostly, sprinkle water outside their doors and sweep the front of their homes and street.” Plum hopes to build on this power and energy of the feminine, by having the mothers, who will be dispersed among performing sweepers, play bullroars— sacred pre-Columbian instruments.

“There is no justice for these women, and my intention for ‘Luz y Solidaridad’ is not only as art-activism but as a moving and shared experience for both the mothers and the audience.”

“After initiating the first e-mail,” Plum says, “I was getting about 30 e-mails a day.” Because of this encouraging feedback, she plans to link “Luz” with a local political event focusing on the women of Juárez. When the show opens next February, she would like to organize a conference at Universidad Autónoma de Querétaro.

“Combining the experiential with the political-educational,” she says, “is something I want to strive for.”

Perhaps the light emanating from Querétaro will help expose the injustice and spark a serious investigation.

To participate in “Luz y Solidaridad” and light your own votive, contact Susan Plum.