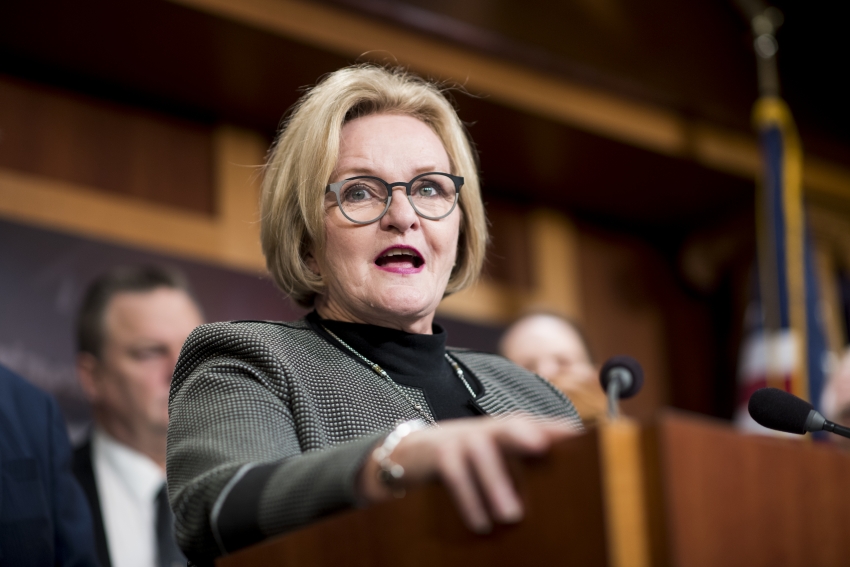 To seriously address the scourge of gun violence, we must oppose U.S. militarism around the globe. Many leading Democrats haven’t gotten the message.

A more holistic approach to dealing with the scourge of weapons and violence would not only make moral sense, it could contribute to a more robust—and effective—argument for instituting gun control measures.

In the aftermath of the shooting in Parkland, Fla., that left 17 dead, many Democrats in Congress are once again calling for gun control, as they have for decades. But all too often, this concern for the unchecked spread of weapons ends at America’s shores.

Last week, top Democratic senators, such as Claire McCaskill (D-Mo.) and Bill Nelson (D-Fla.), expressed outrage over the lack of action by Congress to stop gun violence in America. However these same senators voted against an effort in 2017 to end the U.S. arming of the Saudi Arabian government—a flagrant human rights abuser that has killed more than 10,000 civilians in its three-year siege of Yemen. Virtually all Democratic senators also support arming Israel every year, a country that routinely bombs and subjugates the 4.5 million Palestinians under its charge—46 percent of whom are children. The United States consistently ranks as the number one arms dealer in the world, with support from Republicans and Democrats alike.

It’s not just Congress. Following the Parkland shooting, former CIA director John Brennan insisted on Twitter that “Congress needs to act now to prevent access to semiautomatic weapons that kill innocents.” During his tenure in the Obama administration, however, Brennan consistently lobbied to step up the shipment of arms into Syria.

Former President Barack Obama himself held violence abroad to a different standard than violence at home. While he publicly teared up after the tragic shooting at Sandy Hook elementary in Newtown, Conn., he also oversaw the killing of between 384 and 807 civilians in drone strikes during his presidency, including a 16-year-old American citizen.

Some may insist that, when it comes to firearms, there are different moral metrics for civilian and military use. However, the same argument that gun control advocates in the U.S. frequently make—that flooding society with guns necessarily makes society more violent—remains true on a global scale. As we have seen time and time and time again, U.S. arms shipments to Libya and Syria have “fallen into the hands” of jihadists groups. Even setting aside the billions of dollars in bombs and fighter jets the United States sells to human-rights abusing countries, the flooding of arms into warzones, regardless of how noble the intentions may be, frequently ends up fueling groups the U.S. State Department itself deems “terrorists.”

Violence at home and abroad is inextricably linked. Nikolas Cruz, the Parkland shooter, was trained by the Army Junior Reserve Officer Training Corps (JROTC), a pseudo-paramilitary organization for youth that serves as an onboard for the U.S. military. He also was a member of his school’s rifle team, which receives funding from the National Rifle Association and is sponsored by the JROTC. Two separate analyses—one by George Washington anthropologist Hugh Gusterson, the other by journalist Emily Bell—found that roughly 34 percent of U.S. mass shooters are military veterans, as compared with 14 percent of the general population, and that military service is an “important risk factor” in future likelihood of committing mass violence. These studies reveal a clear correlation between the role of the military in our society and mass shootings.

The United States dropped 40,000 bombs in 2017 and 31,000 in 2016, killing thousands of people across the globe. Do we not have the resources and moral capital to explore in tandem both violence within our borders and the violence we export?

A more holistic approach to dealing with the scourge of weapons and violence would not only make moral sense, it could contribute to a more robust—and effective—argument for instituting gun control measures. Calling for restrictions on gun access in America would be more convincing when paired with calls to stop the flow of U.S. arms to foreign despots and sectarian groups which use them to terrorize people.

Some in the media and Congress not only ignore this connection but perversely imply that Americans should channel the violence they would otherwise engage in at home to foreign warzones. In the wake of the massacre at the Pulse nightclub in Orlando, Fla., Rep. Seth Moulton (D-Mass.) tweeted out a picture of himself in Iraq carrying an assault rifle with the caption, “I know assault rifles. I carried one in Iraq. They have no place on America's streets.” In the wake of the Parkland shooting, Salon published an article with the headline, “How about you join the Army if you want to shoot guns.” The implication being that shooting people on behalf of the U.S. government in far-away countries is preferable to doing so here.

A third option of reducing the frequency of both domestic and foreign violence is rarely discussed, much less entertained. For some liberals, violence committed by the military overseas is seen as inevitable—something we simply cannot stop, something factored in, and therefore not a priority. If this sounds familiar, it's the same excuse the Right gives for why we shouldn't ban guns here at home. Liberals should connect the violence we export with that which we see in our communities—and make a consistent, compelling case to end both.