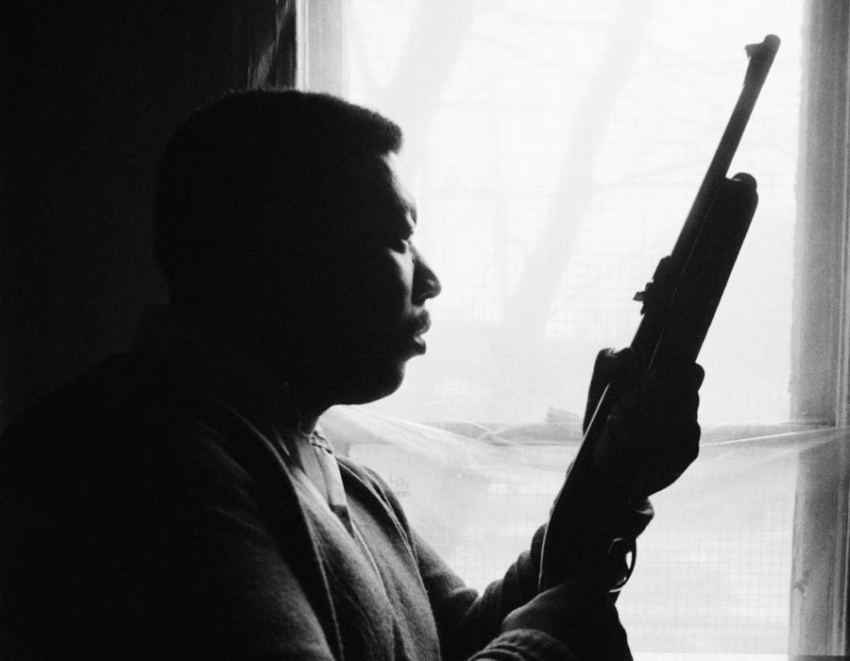 An unidentified member of the Detroit chapter of the Black Panther Party stands guard with a shotgun on Dec. 11, 1969. Black political struggle North and South has long relied on guns for self-defense. (Bettman/Contributor)

Guns Have Always Been Vital to Black Political Struggle

From slave revolts to self-defense, Black revolutionary history is often ignored in the gun control conversation.

Guns were used to fend off night riders seeking to murder civil rights activists and their supporters.

Guns themselves are not central to gun violence. My thinking on this is shaped by my experience as a Student Nonviolent Coordinating Committee organizer in Mississippi in the 1960s, where guns helped keep us alive. Indeed, the centuries-long history of Black armed rebellion against slavery and resistance to white supremacist terror illustrates that guns have always been vital to Black struggle. To be clear, there should be gun control. You can control guns, however, without taking them away.

From the Left-liberal arena’s often elite and entitled quarters, we hear a kind of class bias—the idea that there is something off, even dangerous, in the minds of gun proponents. Take Obama’s comments that small-town residents “cling to guns and religion.”

Quite frankly, I do not know why anyone needs an AR-15. But there are people where I live who like to shoot paintball guns and pretend they are Rambo, and I do not understand this, either. What I do understand is that guns are uniquely romanticized in this country. For those who desire them, an AR-15 is the equivalent of the toy cowboy pistol kids are given at Christmas. Slave revolts notwithstanding—romanticized in my own African-American family life—it is often the worst aspects of gun use that are most romanticized: their use in the conquest of Native Americans and in maintaining white supremacy, even their use by killers like Al Capone or Bonnie and Clyde. This has bred a dangerous tolerance for gun possession and gun violence in U.S. culture unlike any other.

It is only when it comes to the Black freedom struggle that gun use is largely ignored, and often demeaned. Consider the mid-20th century Southern Freedom Movement. People are often startled when I insist that guns helped make that movement possible, but guns were a routine part of Southern life. They helped put food on the table in poor rural communities. They were used to fend off night riders seeking to murder civil rights activists and their supporters. Indeed, few Southern homes—Black or White—were without guns.

Guns were not the problem—but how they were used was critical. Klansmen and the like defended White supremacy through violence. Their actions were backed by state and local governments and largely ignored by the federal government. The armed resistance of local movement supporters was invaluable to the movement’s survival. Groups such as the Deacons for Defense and Justice of Louisiana, formed to protect nonviolent workers of the Congress of Racial Equality (CORE), or the “Black Guard” formed in Monroe, N.C., by NAACP leader Robert Williams, were consciously political, highly disciplined and visibly active in protecting movement activists. But their contributions are erased by a canon that defines the Movement as “nonviolent.”

What about today? Gun violence has unquestionably grown, and more guns are in more hands. But it remains unproven whether the latter is the primary cause of the former.

In poor inner-city communities, the problem of gun violence seems to have grown because of society’s willful refusal to create a level playing field. Banning certain types of weapons will not solve the issues of rage, alienation and lack of opportunity that underlie such problems. As I once heard Nation of Islam leader Louis Farrakhan remark: “If you create a jungle don’t be surprised if there are predators in it.”

And nothing short of some kind of militarized confiscation will even begin to remove the more than 300 million guns in private hands. It may be possible nonetheless to achieve some limited forms of gun control: I like to suggest mandatory gun insurance, national registration and proficiency testing, a 21-year-old age requirement and tough penalties for the wrongful use of guns. But real gun control, that which could reduce or end gun violence, requires a values revolution, a radical humanistic reset of our thoughts and behavior toward ourselves and others. That may be impossible in this country at this point.

Charles Cobb Jr. is a journalist, author and former field secretary for the Student Nonviolent Coordinating Committee (SNCC). His latest book, published by Duke University Press, is This Nonviolent Stuff'll Get You Killed: How Guns Made the Civil Rights Movement Possible.