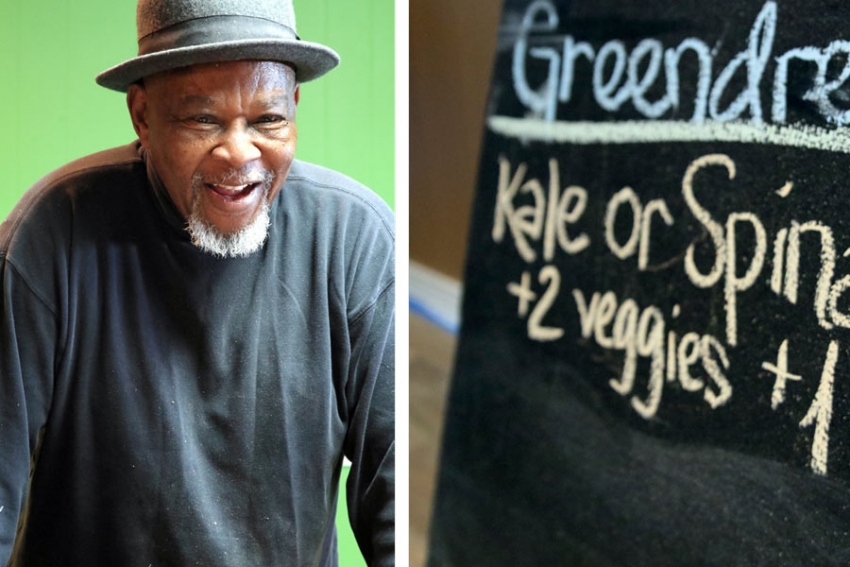 A cooperative Atlanta cafe is step one toward an alternative to white capitalism.

The cooperative aims to build what many black leaders have long seen as necessary: a black-led alternative to the white-controlled and dominated capitalist system.

ATLANTA — Ormond Ashby bounces into the unheated, under-construction home of Café ULU on a chilly January day with a bayonet saw and an air of enthusiasm. The 76-year-old retiree is here to help to build a stage for the new worker-owned café.

“Economics is the only way to have an impact in this world today,” says Ashby, a grandfather of seven and great-grandfather of one. Through his many lives as an American worker—spanning companies like IBM and Mercedez-Benz—he has donated his skills and hard-earned pay to black self-reliance initiatives of the Nation of Islam, the Rev. Al Sharpton and others.

Now, he is one of more than 450 people of African descent across the United States and Europe investing their savings, retirement income and spare time in the Us Lifting Us Economic Development Cooperative, from which Café ULU takes its name. The cooperative aims to build what many black leaders have long seen as necessary: a black-led alternative to the white-controlled and dominated capitalist system.

“It’s now or never for African people,” says Ashby. “The whole world is going through a shift.”

Café ULU is the cooperative’s first project. It had its soft opening February 12 and celebrated its public opening five days later, complete with drumming, an open mic and coffee tastings. The 2,000-square-foot building that houses the coffee shop sits in a black-owned strip mall between a meat market and lounge. The coffee house is strategically located in the not-yet-gentrified, majority black Sylvan Hills neighborhood of southwest Atlanta, close to the city’s six historically black colleges and Tyler Perry Studios, a large potential customer base.

The café features coffee from Africa—fair trade and organic as much as possible—as well as breakfast sandwiches, soups, vegan fare, muffins and scones. In the mold of Washington, D.C.’s Busboys and Poets and Baltimore’s Red Emma, it’s conceived as a hybrid coffee shop and community space. On the menu are art openings (the café will function as a gallery), jazz nights, spoken-word performances, book-signings and other events, such as the elaborate ritual of Ethiopian coffee ceremonies.

The café also hopes to sell the wares of local entrepreneurs, such as Shayda Bakes, a Decatur, Ga.-based bakery founded and run by 15-year-old high school student Noble Shayda Brown.

The plan is to replicate Café ULU (and eventually build other businesses) in other cities. Hekima Kanyama, a co-founder and elder of the cooperative, estimates each new café will take about $50,000 in seed money, plus industrious local members.

The seed money comes from ULU’s membership fees of $50, as well as $1,000 shares that members can purchase. Shareholders will eventually receive dividends, although they are third in line for profit sharing, after the cooperative itself and each café’s worker-owners.

Kanyama likes to muse about what might have happened if the black men who marched in the 1995 Million Man March had returned home and come up with $1,000 each—a pot of $10 billion that could have provided seed money to start community businesses.

“It is better to give birth than to try to raise the dead,” Kanyama says of developing blackowned businesses rather than continuing to rely on an economic system that has failed black people. “We don’t see that we can be lifted by any force in the world except ourselves.”

It’s an old idea in the AfricanAmerican community. Marcus Garvey and his Universal Negro Improvement Association (UNIA) built a network of co-op businesses, including a shipping line, before he was arrested on trumped-up charges of mail fraud and deported to Jamaica in 1927. The Nation of Islam built a network of retail businesses— although not cooperatives—in the 1960s. The Black Panther Party formed cooperatives in the 1960s and 1970s to help feed, house and clothe the poor in California’s Bay Area. In 1967, black farmers began pooling resources in the Federation of Southern Cooperatives/Land Assistance Fund, and today have saved $200 million in black-owned land. Cooperative economics is one tenet of Kwanzaa, a holiday celebrated by millions.

The ULU cooperative is eager to learn from past mistakes. For instance, Garvey wasn’t the best record keeper, which helped J. Edgar Hoover build a hostile case against the UNIA. ULU has invested in a financial dashboard that will enable complete transparency for members.