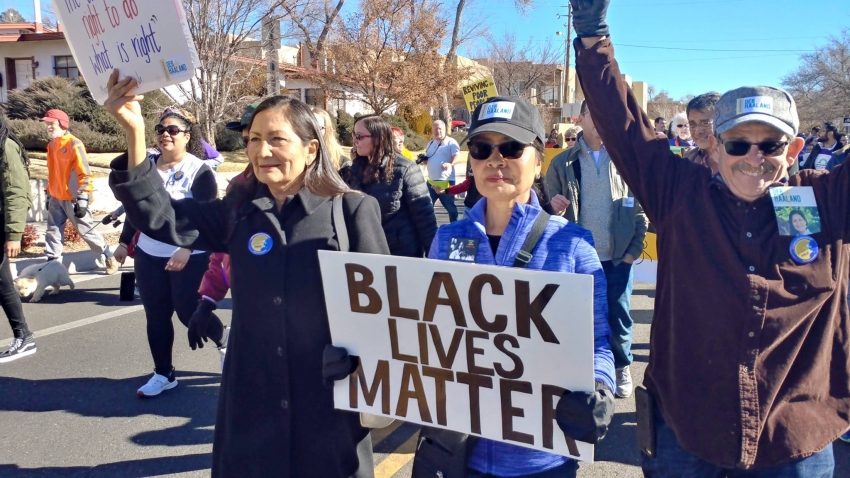 Deb Haaland is running on a platform of Medicare-for-all, marijuana decriminalization, and renewable energy.

We can create a lot of well-paying jobs in the renewables industry. It’s not like people will be out anything. That industry could grow.

As the previous chair of New Mexico’s Democratic Party, Deb Haaland—an enrolled member of the Pueblo of Laguna and the first native woman in the country to chair a state Democratic Party—helped lead the charge to flip the state house. If she’s elected this fall to represent New' Mexico's relatively progressive first congressional district, she will become the first Native-American woman in Congress.

Having garnered endorsements from sitting members of Congress, including Pramila Jayapal (D-Wash.) and Barbara Lee (D-Calif.), Haaland is running a campaigning on a platform that includes Medicare for All, protecting DACA, legalizing marijuana and keeping fossil fuels in the ground. She also aims to scale up renewable energy as an engine for job creation. On Thursday, the climate advocacy group 350 Action endorsed Haaland, along withMaryland gubernatorial candidate and former NAACP head Ben Jealous, in the organization's first backings of the cycle.

In These Times spoke with Haaland by phone this week about her campaign, her time at Standing Rock and what changes she thinks need to be made to the Democratic Party.

Kate Aronoff: What motivated you to run?

Deb Haaland: I love my state so much. I was chairwoman of the state party, and I finished my term in April of 2017 and announced shortly after that. I wanted to continue to feel like I was serving the people of New Mexico.

Kate: Can you talk about your time as chair of state party?

Deb: We have a Republican governor right now, Susana Martinez. She has not done the best job for our state. So, in 2014 I ran for Lieutenant Governor, and ended up being on the ticket with the Democratic gubernatorial candidate who ran against her—Gary King. We lost in the general election, even though she’d been a terrible governor. We weren’t getting the message out well enough.

After that experience—we also lost our state house in 2014—the morale of Democrats across New Mexico wasn’t very high. I felt I knew what needed to be done for the party, so I ran for the chair seat. I won, and we just got to work. I traveled all over the state and really wanted volunteers who had been working to get our Democrats elected to know that the party appreciated them a great deal. Ever since Donald Trump had announced his campaign, we had been messaging about that because he was saying so many outrageous things.

By the time November came around, everybody was very energized. We flipped our statehouse, increased our seats in the Senate, and won two out of three statewide elections. Our presidential nominee won by 8 points here. I like to think that had a lot to do with what we did as a state party.

Kate: What would you say are the biggest issues facing New Mexico’s first Congressional district?

Deb: We have the largest city in New Mexico: Albuquerque. But we also have some wonderful rural communities. We’re kind of all in the same boat, although I know rural communities face a little bit more of a challenge. We need jobs here in New Mexico. So I’d love to start making New Mexico a global leader in renewable energy. That’s something that can and should happen. We have close to 300 days of sun per year, and I believe that bringing more renewables here will create badly needed, sustainable, good jobs and help combat climate change. I’d love to see solar panels on every building and every house in District 1. I think it would save people a lot of money, and that our environment would be better off for it.

Kate: The fossil fuel industry has a large presence in New Mexico.

Kate: Can you talk about how that influences politics in the state? It’s not your district, but is that something you envision yourself coming up against?

Deb: Sure. Right now, the industry employs a lot of people, mostly in southern New Mexico but certainly elsewhere. There’s a lot of gas and oil in northern New Mexico. The last thing I would want to see is anybody lose a job. They’re too important here, and people need to be able to sustain themselves and their families. I would love to see us move on this renewable energy track, and start to transition off of fossil fuels. If everybody paid their fair share of taxes, there’d be a lot of money to go around for a lot of things. And I think we need to make sure that workers in the fossil fuel industry are being offered educational opportunities if they want to change their jobs at a certain juncture. We should give them the option to do that.

Kate: Can you talk a bit about your experience at Standing Rock, and how that’s influenced your campaign?

Deb: In September 2016, I decided that I wanted to go to Standing Rock. For months, I had been posting and reposting what was happening there. They were mistreating people—the water cannons, all of it. It was a really terrible thing to do to a group of peaceful water protectors who just wanted to protect their land. I felt like I needed to go and be a presence there. I wasn’t sure what I was going to do when I got there, but I was able to go to the tribal building and help the tribe gain some critical support that they needed.

Kate: And you worked against the Dakota Access pipeline for the next several months, through the effort to divest from banks that invest in Energy Transfer Partners, the company behind the pipeline.

Deb: Yeah. During the time I was in Standing Rock, I was still state party chairwoman. We divested the party’s funds from Wells Fargo when I got back. There were a lot of big banks involved in that pipeline, and a lot of big banks still are. It was a symbolic move—the state party didn’t have a lot of money—but I felt it was important to take a stand.

We need to change our thinking about fossil fuels and about the environment.  We don’t have that much longer left. Climate change is real, and could become the largest threat we could ever imagine. It’s going to affect poor folks first before anyone else, and we need to pay attention to that. My way of looking at it is that we need to redefine the meaning of wealth. The vast majority of people would equate that with money, but that’s not really what wealth is. If we don’t have an environment, where would we be? We need that balance. It’s sad to me that we know what needs to be done but we’re dragging our feet on it.

Kate: A lot of politicians shy away from talking about climate change. How do you bring it up with voters?

Deb: We can create a lot of well-paying jobs in the renewables industry. It’s not like people will be out anything. That industry could grow. It’s a win-win situation, and people understand that here.

Deb: Right. In 1968, Shirley Chisholm was the first African-American woman to run for federal office. I imagine that once she got in, it fired up an enormous number of Black women to run for office. My job, if I get elected, is to make sure that I leave the ladder down for people to climb up after me. There’s no Native American congresswoman I can go to right now to ask for help. Luckily there are so many women of color who have supported my campaign, and that’s helped me a tremendous amount. But it would be nice if we had a Congress that was more diverse. People’s varying backgrounds are what help us find solutions to the issues our communities face. If you have one kind of person—all white males—that’s not enough. You need diversity.

Kate: On that note, there’s been some controversy recently around the the Democratic Congressional Campaign Committee’s endorsements. For instance, they haven’t endorsed a single Native-American candidate yet this cycle. You’ve been involved with the state Democratic Party for a long time. Do you think the party needs to change to make itself more diverse, and help more folks get into office?

Deb: Yes, I think that would be a smart move. A lot of the political world runs off data and numbers and how much money you’ve raised. There are a lot of things that people look at when they’re endorsing a candidate, but they don’t necessarily delve into the community. I don’t know what they’re basing their criteria on, but I just know that I’m working super hard. Me and my team—which is very experienced in New Mexico politics—all of us started as volunteers, working on other campaigns. If I win, that’ll be the reason.

Kate: There are huge barriers to voting rights in many Native-American communities. What have you seen in your time as Native Vote director for the Obama campaign in 2012 and otherwise, and are there ways you would hope to address that in Congress?

Deb: I really honestly wish that everyone could model New Mexico on this. Native Americans are over 10 percent of our population. We have 19 Pueblo Indian tribes, three Apache tribes and the Navajo Nation, and we enjoy a generally good relationship with the state. Under our last Democratic governor Bill Richardson, he elevated the Office of Indian Affairs to a cabinet-level position. He also signed into law the State Tribal Collaboration Act. It includes many things, stipulating that tribes have to be consulted in matters of certain importance that are decided by the governor. That goes for education funding, environmental issues and more. We have a Native American Election Information Program through the Secretary of State’s office, and right now we have a secretary of state—Maggie Toulouse Oliver—who is passionate about everybody’s right to vote, and is putting great deal of time and effort into making sure that people in Indian country have every opportunity to vote. We strive to have polling locations in every single Native-American community, so nobody has to walk or drive 50 miles as happens in some states. Here in New Mexico, I do feel like our state officials care about our right to vote.

Native Americans couldn’t vote in New Mexico until 1948. A man named Miguel Trujillo fought in World War II as a Marine, and he couldn’t vote. So he sued the state and won. We owe so many debts of gratitude to people have come before us in this country, and he’s one of them.