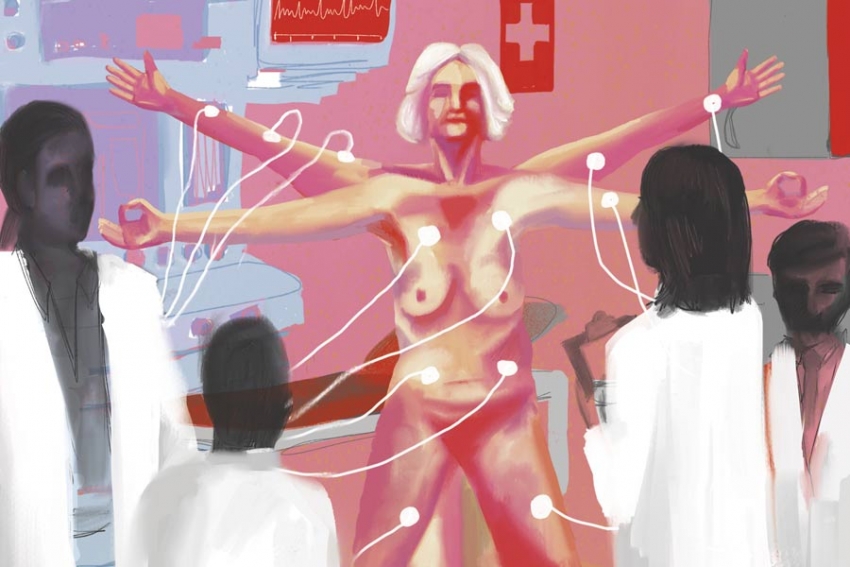 In her new book, Natural Causes, the author reminds us that we can’t cheat death – although we can die trying.

It seems that staying alive and young and active has become a duty and a responsibility each of us ignores at our peril.

In her new book, Natural Causes: An Epidemic of Wellness, the Certainty of Dying and Our Illusion of Control, Barbara Ehrenreich reminds us that once we are over 70 we are “old enough to die” and should not make strenuous or unseemly efforts to stay alive. As a young woman, she wanted to be a scientist and wrote her Ph.D. about certain cells that are, apparently, vital to the immune system. Macrophages, she tells us: help sculpt the embryo into a human fetus; they defend the body against microbial invasions; they participate in the process of antigen presentation; they keep the body clear of dead and damaged cells. On the destructive side, they participate in the growth and spread of tumors; they launch the catastrophe of inflammaging; they are frontline killers in autoimmune diseases.

The central chapters of this alarmingly persuasive book enlarge knowledgeably and imaginatively on this news of cellular treachery and its implications. Our bodies are, it seems, sites of permanently warring factions of cells, wayward and possessed—as it were—with minds of their own. They “lunge” and “devour” one another and simply make mistakes, so that our minds and bodies are never to be relied upon to silkily and systematically function. After a certain point, therefore, Ehrenreich insists, we should stop supposing that we can control these cells or the diseases they inflict on us, let alone our ageing. She is “giving up on preventive care,” on tests and monitoring, and she advises us to do the same.

However, the book is not concerned solely with the inevitable depredations of old age. Its scepticism addresses a good deal of what goes on these days within conventional medical practice as well as alongside it. We have been seduced into beliefs that our bodies are our responsibility, that mind controls matter, to such an extent that conventional as well as “alternative” therapies have developed elaborate rituals that often exceed the so-called “primitive” healing rituals we are inclined to mock as magic in parts of the world unconquered by Western medicine. She focuses on some of the rituals surrounding childbirth, such as shaving pubic hair and (I might add) supplying miniature swimming pools. Are white coats and all the versions of “imaging” our mysterious innards really essential to our health and our knowledge about ourselves and our bodies? Do we, as patients, cling to the trappings of modern medicine as evidence that we are being taken seriously?

We are bombarded with questions and warnings about diet and drink and smoking, and ordered to exercise, though not to excess. If we have high blood pressure or “bad” cholesterol it is almost certainly our fault. If we are fat we may not deserve medical treatment at all. Even cancer may be caused, we’re sometimes told, by unwarranted tension and our response to the stresses of contemporary life. The warnings change with the times, but they are always admonishing as well as contradictory. Our duty to our bodies may be thought of as an aspect of Western individualism, and respect for the reality and sanctity of the self.

Ehrenreich takes us on a complex journey through competing theories, which now, and in the past, adjudicated the mind/body relation. They have been philosophical and religious and may nowadays be psychoanalytical. She introduces us to a world of mass-market apps, with names like Simply Being and Buddhify, that promote “positive thinking” and “mindfulness”—mindfulness being only a recent example of dozens of profitable scams that offer to improve our minds and enable them to control our erring bodies.

We are also expected to make sense of statistics that seem to defy our experience. We “know,” for instance, that smoking can cause lung cancer, yet of the 15 or so people I know who have lung cancer or have died of it, only one ever smoked. As Ehrenreich points out, “a 2015 study found that the average adult attention span had shrunk from 12 seconds a dozen years ago to eight seconds, which is shorter than the attention of a goldfish.” What should we make of that as a “fact”?

I don’t suppose Ehrenreich will give up entirely on prevention, and nor will I. She still goes to the gym and I go to the swimming pool. I swallow quite a lot of pills and put drops in my eyes, and I have just acquired a noisy hearing aid I usually leave at home.

I am even older than Ehrenreich, and though in pretty good health, am assailed by the illnesses and deaths of friends who are my age or younger. A dear old friend died a week ago, peacefully, awake and aware and 86, but angry that she’d wasted a precious last year of her life feeling tired and sad from her treatment, which had completely failed to stop her lung cancer spreading to most of her major organs. She accepted her inevitable death with grace and serenity, but regretted that treatment. Ehrenreich would have encouraged her to refuse to have anything to do with it.

I’m fond of the no-doubt unreliable statistic I read somewhere that most of us can look forward to living for about 10 years longer than our parents, but that we can also look forward to spending the equivalent of about eight of those years in hospitals or doctors’ waiting rooms. If anything, Ehrenreich shows that things are even worse in the United States than they are here in Britain. The U.K. National Health Service is a good deal less profligate with its testing and monitoring than the U.S. medical profession and its insurance companies. But here, too, we can feel both despised and bullied by the medical profession, and bamboozled by its predictions and statistics.

It seems that staying alive and young and active has become a duty and a responsibility each of us ignores at our peril. We may be rewarded with the occasional “wonderful for her age” and punished with contempt for our lethargy, obesity, flabby limbs and muddleheadedness. So how should we live well through all these extra years? Ehrenreich writes books and travels. She “keeps busy”— that awful phrase so often used to mask our uselessness and downgrade our occupations. That said, for many people of our age, those doctor or hospital appointments may be the only dates in their diaries. They may feel at times that their very existence is a burden to their families and friends and, nowadays, to the state. They are often made to feel that they are using up valuable natural and social resources the young could do with, and to no avail. Yet they are discouraged from ending their lives, would find it difficult, and may not wish to do so anyway.

We’re often told to face up to the reality of death, yet no one is quite able to tell us how to. Imagining the world without us in it is beyond most of us, and Ehrenreich admits to its fundamental impossibility. And she’s not encouraging us to welcome death, let alone the possibly disagreeable experiences that may precede it. She does tell us, though—and I doubt this would be prescribed by our National Health Service—about a drug called psilocybin, which dissolves fear, even the fear of death. I’ll go for that.