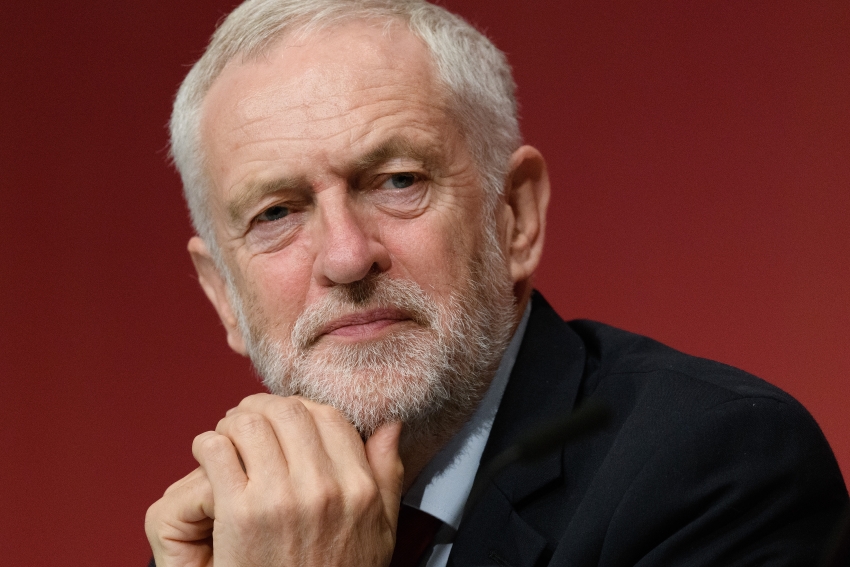 Jeremy Corbyn Spent Passover With a Group of Socialist Jews. Here’s Why I’m Not Insulted.

How dare the world decide for us who’s a proper Jew.

I am an inactive but faithful member of an organization called Jews for Justice for Palestinians and I give a small monthly sum of money to another organization that supports the medical services in Gaza.

I’m not just torn, I’m quartered by this dispute about anti-Semitism in the Labour Party. What’s going on? Apparently anti-Semitism is “rife” on the Left of the party. There are more than a few “bad apples,” and Momentum itself, the movement that has grown up round Jeremy Corbyn, admits to the presence among its members of anti-Semitism in forms they describe as mostly “unconscious bias.” The focus has been on two examples. Jeremy Corbyn seems to have discouraged the removal of an unpleasant and anti-Semitic mural without looking properly at it. When he did, he apologized, later. And then one Labour Party official has “posted” another’s holocaust denial on Facebook, whether approvingly or not we’re not told. Both of these misdemeanours could have been due to carelessness and inattention, but perhaps they weren’t.

It’s not that I want to deny the existence of anti-Semitism on the Left, although I am a little surprised to find it exposed and vilified with such vigor by right-wing newspapers, some of which have a poor record themselves. But anti-Semitism lingers as a possibility all the time and everywhere, just as other forms of racism do, even though this country has a relatively better modern history of countering anti-Semitism than most countries do. There is some public acknowledgement after all that criticism of Israel’s treatment of its Palestinian population is not the same thing as anti-Semitism, but a good deal of the discussion deliberately blurs that distinction.

Let me start somewhere else. I am Jewish. My mother was Jewish. So, I’m told—though with what authority I am never quite clear—I am Jewish. I’m perfectly happy with that, though growing up in a family where my father was not Jewish and not religious meant that we did not know very much about Judaism. Jewish culture is strongly familial, not to say patriarchal, so that aspect of Judaism was partly absent from my experience. However, my mother’s Jewish family was large and important for us. My grandfather was one of the fifteen children of a man who made a small fortune developing parts of London like Notting Hill Gate. Fourteen of those children survived to live comfortable lives in large houses, in London and the home counties, and almost all of them married Jews. There were seven girls and seven boys, and though one girl became an anthropologist and my grandfather became a scientist, most of them dabbled a bit in business, but can’t be said to have had professional careers or even jobs. One of them, indeed, dabbled the family fortune away, his mind on higher things.

They were Ashkenazi Jews, whose ancestors had come to England in the eighteenth century from Holland and Czechoslovakia and who sold hats and other things, notably ostrich feathers, and were staunchly British and patriotic as well as Jewish and pretty well non-observant, though my grandfather presided over Seder nights, and my grandmother, whom I never knew, was a Hebrew scholar, a poet and a Zionist. Oddly, my secular grandfather bought a family plot in the so-called “orthodox” part of the Jewish cemetery in Willesden, where he and his two wives are buried. Later generations, however, have been refused burial there because they were non-observant.

We all knew that my mother was “shown the door” by some grand Jewish friends of her parents when she married my father, and that their marriage met with more disapproval from the Jewish side of the family than from the other, ostensibly Unitarian, side. My sisters and I grew up rather wishing we were, as our many cousins were, “proper” Jews, instead of half-and-halfs. If we suffered any discrimination (and we didn’t much) it was from “proper” Jews. One sister was excluded from Hebrew classes for not being a “proper” Jew and later, as a medical student, from a Jewish student society. I was lectured unkindly by a Jewish young man at my university, who has become a well-known writer since then, for hob-nobbing with non-Jews some of the time. But all that is small beer. And especially small beer, you might say, given the history of the Jews and anti-Semitism on the one hand, and the unjust Israeli government on the other.

I am an inactive but faithful member of an organization called Jews for Justice for Palestinians and I give a small monthly sum of money to another organization that supports the medical services in Gaza. I don’t attend meetings at all regularly or march in protest very often. When I have done either I have been struck by the determination and courage it has taken for some of the Jewish people I’m meeting or marching with to declare their sympathy for the Palestinians, since it has often entailed serious clashes with their families and even extrusion from them.

It sounds a bit as though I’m saying that Jews give each other more lip and trouble than they get from other people, and some might agree with that. But I think what I’m getting at is that Jews are just like other groups of people who agree about some things, but not about everything. Some will find their religious or tribal or cultural loyalties in conflict with their politics or their family loyalties, just as other people do. It is no easier for Jews to feel all of a piece, comfortable with discrepancy and contradiction, than for anyone else. Perhaps socialism is more important to me than Jewishness, but perhaps not as important as family loyalty or affection for my friends, for instance. Socialism was for a time more important to me than belonging to the Labour Party, which I left for some years. I rejoined when Jeremy Corbyn stood to become its leader and I voted for him then.

However, I was on the verge of adding anti-Semitism to an only just tolerable list of objections to current Labour policy and to the undeniable carelessness of Jeremy Corbyn. There is their shilly-shallying about Brexit, their failure to welcome into their inner circle really good MPs like David Lammy, presumably because he once served in a Blair government. But I find I mind those things slightly less than seeing Corbyn jeered at for spending Passover with a group of young Socialist Jews who call themselves Jewdas. This was seen by the press as insulting to “proper” Jews. It wasn’t insulting to me. How dare the world decide for us who are proper Jews and who aren’t, while telling us, as Hitler did, that just one grandparent and we’re Jews whether we like it or not. And then telling us that we are anti-Semitic or self-hating Jews if we think the Jewish state of Israel is operating something very like Apartheid.

What the U.S. Left Can Learn From the Labour Party’s Epic Loss