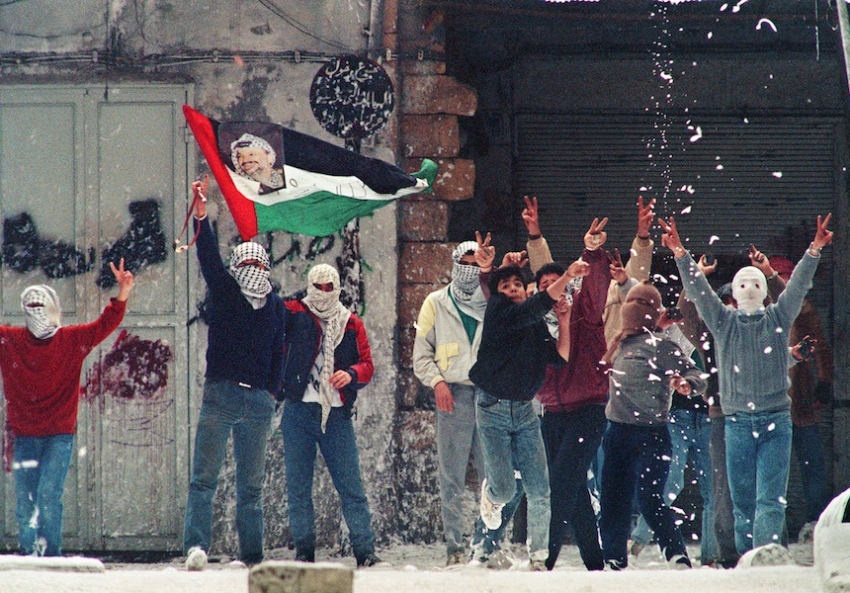 Palestinians demonstrate in Nablus on the West Bank on Jan. 22, 1988. While mass protests grabbed headlines, the Intifada was powered by a grassroots democratic network of co-ops, women's groups, community councils and more. (Sven Nackstrand/AFP/Getty Images)

Lessons From the First Palestinian Intifada

Women's committees developed cottage industry cooperatives and literacy programs so women could learn productive skills and establish some degree of economic independence from their fathers and husbands.

On Dec. 9, 1987, four Palestinian workers were killed in a collision with an Israeli Defense Forces (IDF) truck. Within days, protests spread throughout Gaza and the West Bank demanding justice for the victims. The demonstrations snowballed into one of the most powerful popular uprisings in history, demanding an immediate end to the military occupation of Palestine.

Thirty years later, the First Intifada—an Arabic word meaning “shaking off”—continues to hold a powerful place in the conflict’s history. The enormous demonstrations and general strikes drew media attention from around the world, and the Intifada is frequently credited with forcing the Israeli government to negotiate with the Palestinian Liberation Organization, initiating the peace process.

There was also a Second Intifada, from 2000 to 2005, which was markedly different from the First, being characterized by armed struggle by a small segment of the Palestinian population. Today’s Great March of Return, a new wave of popular demonstration in Gaza over the past month, represents a dramatic resurgence of the First Intifada’s unarmed mass protest tradition.

But there was much more to the First Intifada than mass protests. A less visible constellation of community organizations and networks made the uprising possible and, through a combination of grassroots democracy and what we would now call the “solidarity economy,” sustained the movement over years. This strong organizational bedrock stands out among popular movements, and is worth revisiting at a time where radical organizers from Barcelona to Kurdistan to Jackson, Miss., are taking up a similar strategy.

In the years leading up to the Intifada, the Israeli occupation was among the most totalitarian political orders on the planet. All political activity was banned, as were any public displays of nationalism, such as Palestinian flags. State control over all areas of life was maintained through checkpoints, secret police, kangaroo courts, torture and surveillance. The incarceration rate for Palestinians far exceeded even the contemporary United States or the Soviet gulag system. (Much of this remains true today.)

But despite this repression, the 1970s and ’80s saw an explosion of Palestinian community organizing initiatives. The student movement, the labor movement and the women’s movement built networks of community councils all across the occupied territories. Mutual aid networks linked middle-class students with harder hit communities, assisting with everything from medical care to repairing buildings in refugee camps. Unions operating like undercover worker centers organized workers by neighborhood or town rather than in the workplace.

Most important were the feminist organizers who set up women’s committees, at first in the cities but eventually in refugee camps and across the poorer countryside as well. These enabled women to meet one another’s basic needs and build power toward greater sexual equality. They developed cottage industry cooperatives (managed according to “one worker, one vote”) and literacy programs so women could learn productive skills and establish some degree of economic independence from their fathers and husbands. They organized female workers to win better wages and working conditions. Crucially, these committees managed cooperative childcare services so that poorer women with young children could participate in the political and self-developmental work of the women’s movement.

The collaborations of these different community institutions—women’s committees, local unions and others—for mutual aid projects, labor organizing and political work created the broad perception that each were different aspects of a single popular movement. Their many projects made military occupation more livable, sustaining Palestinian families in the face of ongoing colonization; they allowed individual women to stretch the boundaries of patriarchal control and become more active participants in the national movement; and they laid the early foundations of the “home economy,” which fostered Palestinian self-sufficiency that would sustain boycotts and strikes during the Intifada. Taken together, this confluence of movements and the community institutions they built would become the backbone of the revolutionary upheaval that broke out at the end of 1987.

The initial protests of that December received violent response from the Israeli government. Many protesters were massacred with live rounds. Over the first year of the uprising, 311 Palestinians were killed by Israeli soldiers, 53 of them minors. When footage of these killings provoked international outrage, the IDF moved away from live rounds but continued to use rubber bullets and clubs, deliberately breaking the bones of unarmed demonstrators.

They carried out or delegated to subcommittees tasks for every community function imaginable: garbage collection, determining local strike dates, collecting donations through an “alternative taxation system,” distributing aid (food, fuel and medical care), repairing damaged buildings, organizing barricade-building, running classes out of living rooms when the schools were shut down, and more. When certain areas were placed under curfew, nearby popular committees would collect supplies to be smuggled in. Volunteer medical teams went door to door to care for those injured by soldiers and to compile essential blood type information for their own donor registries.

Like the women’s committees, the popular committees were networked through a confederal structure. Each committee elected a delegate to spokescouncils to coordinate their tactics and share resources, information and ideas; spokescouncils elected delegates up several more levels to a nationwide body, the Unified National Leadership of the Uprising (UNLU).

The UNLU was a secretive council that drafted and published official leaflets outlining details about marches, strike dates and resistance tactics. In the days before social media, this structure allowed good ideas to disseminate quickly, even under fierce censorship. The idea of a tax strike, a tactic deployed to great effect by the people of Beit Sahour later in the Intifada, was first proposed by the popular committee of a small village near Nablus and ended up in a leaflet that was printed and distributed throughout the whole of Gaza and the West Bank. The UNLU was also essential for providing local actions with a national strategic coherence: General strikes across all of Palestine, for instance, were far more powerful than isolated local ones.

At a more fundamental level, the power of the Intifada stemmed from its fusion of oppositional and reconstructive politics. Strikes, barricades, boycotts and civil disobedience all served to make the occupied territories ungovernable. But that opposition was sustained only through developing a new economic and political base for Palestinian society.

For instance, Israeli colonization had been designed to render Palestinians dependent on wages and goods from inside Israel. So if Palestinians wanted to support themselves while starving the Israeli economy of their labor, they needed to develop the “home economy.” Community-run “intifada gardens” and systems of mutual aid filled this gap. The popular committee of Beit Sahour kept an entire community-owned dairy operation hidden from the IDF for four years during “Operation Hunt Cow,” where helicopters and soldiers on foot searched the village for cows that had been declared a “threat to Israeli national security.” These efforts to ensure that everyone was still fed amid economic turmoil allowed all of Palestinian society to participate in the struggle, making the Intifada more powerful.

Absent a state of their own, Palestinians organized a whole political apparatus within the occupation. These new autonomous political structures were consciously intended not only to administer the uprising, but to form the institutional basis of the liberated Palestinian society that so many saw as right around the corner.

Unfortunately, this liberated, democratic Palestine did not come to be. Repression by Israeli authorities was extreme. Many thousands of Palestinians were beaten, imprisoned, tortured, illegally deported or killed. Israeli intelligence threatened Palestinians into becoming informants, infiltrating the movement at multiple levels. This drove extreme paranoia, resulting in several years of self-destructive extrajudicial killings of suspected collaborators. The Intifada began to lose its organizational strength and slowly fizzled out.

Even so, it succeeded in forcing Israel to the table to negotiate terms for Palestinian independence, initiating the peace process. This was a dramatic reversal from previous Israeli policy, which rejected outright even the possibility of an end to the occupation. While those negotiations have not led to a Palestinian state, the First Intifada still transformed the international consensus about the Palestinian situation and brought the country closer to liberation than anyone could have reasonably expected just a few years prior. In many places, popular committees still exist, although having been shunted aside by the Palestinian Authority, their role in society has diminished.

Today, the Palestinians’ approach to political struggle—organizing oppositional community institutions from below to meet human needs, fight back and build a new society in the shell of old—has crept back into movement strategy in places all around the world. Kurdish communities, both in Turkey as well as northern Syria, have organized confederations of councils to build radical democracy beyond the nation-state. In El Alto, Bolivia, indigenous people have organized hundreds of neighborhood assemblies that govern the community and mobilize popular resistance against water privatization and natural gas exploitation. In Jackson, Miss., Cooperation Jackson is developing a cooperative economy alongside people’s assemblies intended to constitute a power base outside the municipal government. Revolutionary organizers are increasingly coming to recognize the potential in building such a “dual power,” as the strategy is known. Thirty years after the Intifada, we ought to look back at their struggle, and reflect on what it still has to teach us: first and foremost, the simple power of a neighborhood council.

Mason Herson-Hord is a transit justice organizer in Detroit, Mich. with the bus riders union Motor City Freedom Riders. Previously, he has conducted ethnographic fieldwork on community struggle against military occupation in the occupied West Bank and the occupied Western Sahara. He sits on the steering committee of Symbiosis and is a member of the Symbiosis Research Collective.