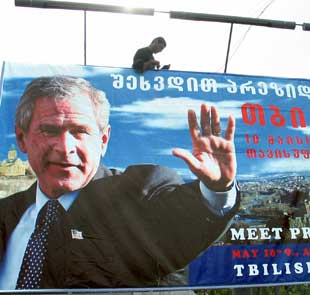 During his May visit to Georgia, President George W. Bush shook his hips to traditional music, causing Georgian President Mikhail Saakashvili to exclaim with delight, “I would never dance like that. He danced much better than I would have.”

The remark was emblematic of the happy and historic visit. The small former Soviet state received a much-needed scrubbing before welcoming its first American presidential visitor. The president’s motorcade rumbled over newly paved roads en route to Tbilisi and buildings throughout the capital were freshly painted.

From the podium in Freedom Square, where hundreds of thousands had gathered two years ago to protest and finally oust the regime of Eduard Shevardnadze, Bush told the crowd, “Your courage is inspiring democratic reformers and sending a message that echoes across the world: Freedom will be the future of every nation and every people on Earth. … Georgia is today both sovereign and free and a beacon of liberty for this region and the world.”

The mainstream press coverage of the trip focused on Georgia’s new opportunity to step out of the shadow of its Soviet past and into the sunshine of “New Europe” and a warm relationship with the West. But a more troubling dimension of U.S.–Georgian relations lurked under the surface. Bush praised the Georgian people’s courage from behind a high wall of clear bulletproof screen, while sharpshooters patrolled the rooftops. The screen was nearly invisible to the cameras, but its presence, as well as the malfunctioning grenade thrown within 100 yards of Bush, highlighted the contradiction of the war on terrorism: The Bush administration’s rhetorical embrace of freedom and democracy is undermined by Washington’s policies of arming and training repressive regimes.

As exemplified in Georgia, and repeated in many corners of the world, U.S. arms transfers and military aid policies undermine efforts to counter terrorism effectively. Since 2002, U.S. funding to foreign militaries has increased and restrictions on military transfers have been waived at an unprecedented rate. Indeed, 20 of the top 25 U.S. arms clients in the developing world in 2003 were either undemocratic regimes or governments deemed by the U.S. State Department to have committed major human rights abuses.

Georgia is not the worst example of this dynamic. Across the Caspian Sea, Uzbekistan also receives millions more in military aid. An authoritarian regime with a human rights record that includes the gruesome 2002 killing of a dissident by boiling him alive, Uzbekistan is now reportedly accepting suspected terrorists from U.S. custody–prisoners who are subjected to interrogation techniques not allowed in this country.

The United States is party to both the International Covenant on Civil and Political Rights, which it ratified in 1992, and the Convention Against Torture and Other Cruel, Inhuman or Degrading Treatment and Punishment, which it ratified in 1994. So is Uzbekistan, but its history of flouting international human rights standards is well known, even to the U.S. State Department. According to Human Rights Watch (HRW), signing these treaties ensures that protection from torture is “non-derogable,” meaning that it applies at all times, even during war or public emergencies.

From the Philippines to Colombia, from Nepal to Nigeria, anywhere leaders have embraced the aims of the U.S.-led war on terrorism, the United States has glossed over concerns about human rights, democratic reform and the rule of law. In the short term, this might lead to some progress in capturing individual terrorists or allowing the United States military flexibility, but a closer look at what the United States gives and what it gets in return in Georgia hints at the larger problem of the shortsighted, self-serving and dangerous bargains made in the name of fighting terrorism.

For a country that is slightly smaller than South Carolina, with only 4.6 million citizens, Georgia receives a staggering amount of military support from the United States. In 1997, Georgia received its first foreign military financing (FMF) grant of $700,000. The next year, Washington granted $5.3 million in military aid–a sevenfold increase. Since then, Georgia has received a total of $107.7 million in FMF grants and the Bush administration requested an additional $12 million for Tbilisi in the 2006 budget.

Georgia has also been buying weapons and military hardware from the United States–a total of $21.9 million between 1999 and 2003. Georgia started slowly, taking delivery of $19,000 in military equipment in 1999. But, that was just the beginning. Georgia took delivery of $9.8 million of weaponry and hardware in 2003, the last year for which Pentagon data is available.

Additionally, Georgia has been a recipient of the State Department’s International Military Education and Training (IMET) funds since 1994. Before the war on terrorism, IMET funds hovered between $300,000 to just over $400,000 per year. But in 2002 the funding almost doubled to $889,000. In 2003, the funding increased another 33 percent to $1.2 million–similar amounts were granted in 2004 and 2005. President Bush has requested another $1.2 million in 2006, an almost 2,000 percent increase in IMET aid to Georgia over the past decade.

This is not classroom instruction. This is on-the-ground training with immediate applications. American soldiers are training a Georgian “rapid response” military force to protect the Baku-Tbilisi-Ceyhan pipeline from terrorist attacks. Construction on the pipeline through Georgia is near completion and will connect the Mediterranean with the Caspian oil fields, which hold the world’s third largest oil and gas reserves.

In another region, according to the New York Times, U.S. military training and support appear to have helped the Georgian military expel Chechen rebels and Islamic fighters from the Pankisi Gorge, a narrow strip of land near the Russian border. While the Bush administration linked these fighters to al Qaeda, Georgian Defense Minister David Tevzadze publicly challenged these claims, telling Defense Week, “it is very difficult to believe” that al Qaeda is in the Gorge, because they would need to “cross at least six or seven countries.”

In 2002, a San Francisco Chronicle reporter spoke with soldiers receiving U.S. training for the Pankisi Gorge exercises. Their captain, Shalvab Badzhelidze, was candid about the real objectives of the training. “Pankisi is a minuscule problem,” he said. “We are doing something much more serious. We are training for an operation in Abkhazia.” Georgia lost this tiny province to secessionist rebels in 1993, and its inhabitants live under Russian support and protection.

This pattern of lumping dissidents, criminals and anyone unsavory or troublesome under the rubric of al Qaeda is repeated by leaders in the Philippines, Indonesia, Algeria, Uzbekistan and elsewhere. And in response, U.S. military training aid has increased more than 50 percent since 2001.

Both sides gain in this dynamic. Georgian President Saakashvili successfully uses the rhetoric of the war on terrorism to isolate domestic threats and crack down on dissent, and uses U.S. weapons and military know-how to rebuff Russia and consolidate power. For its part, Washington has the advantage of Georgia’s strategic location near the volatile Middle East. U.S. warplanes crisscross Georgian airspace, thousands of U.S. troops are stationed there, and Georgian bases store fuel and equipment for the United States.

The relationship extends all the way to Iraq. Georgia is one of a handful of countries wholeheartedly backing the U.S.-led war in Iraq. Following Bush’s re-election in November 2004, Georgia increased its number of troops in Iraq from 159 to 850. At a time when larger allies like Italy and Poland are planning to pull troops out of Iraq by the end of 2005, this increase makes Georgia one of the top military contributors on a per-capita basis.

The improvements in Georgia’s human rights record were repeatedly touted during President Bush’s visit there. But, on the eve of his trip, HRW released a report asserting that steps taken by President Saakashvili have “proven inadequate” to “stem abusive practices.” Moreover, the report continues, “Some of the government’s new law enforcement policies appeared to trigger new allegations of due process violations, torture, and ill-treatment.” In earlier reports, HRW noted that the country is “one of the most corrupt in the world, is desperately short of money, and has a record of persistent and widespread human rights abuses.”

The oil pipeline, military access to Georgian territory, support for the war on terrorism and the war in Iraq, the photogenic closeness to a former Soviet state–are these things too valuable to risk alienating Georgian leaders by pushing hard for real democratic reform and respect for human rights? It seems so. While Bush dances in Freedom Square, human rights abuses continue in Georgia. And the war on terrorism flounders because U.S. policies bolster rather than counter terror throughout the world.