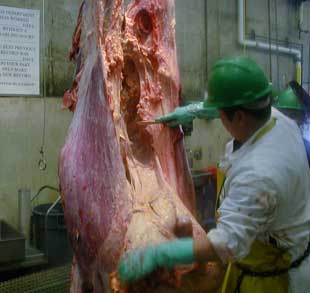 Readers of the March 5 New York Times were greeted by the grotesque headline, “His Hands Reattached, a Worker is Overjoyed.” The piece included a photo of the recovering machinist, 49-year-old Arsenio Matias, a Dominican immigrant and father of six. While operating a vacuum press that produces plastic components for window displays, both his hands had been caught up and neatly severed at the wrist. Only the quick thinking of his co-workers, who used their belts to stop the flow of blood from his arms and ran to buy ice to keep his hands alive until medics could arrive, allowed Matias to survive long enough to have his hands surgically reattached. Doctors do not expect him to regain normal mobility.

This account of traumatic injury at the workplace is a fairly ordinary situation–the only thing exceptional about it is that Matias’ hands were saved. Had this not been the case, or if he had lost the use of his hands over time to repetitive stress, we would know nothing about him. Disabling workplace injuries are now so common in the United States that the thousands of workers who lose their fingers, hands, hearing, sight, mobility–and often their lives–every year remain invisible to most of us. We don’t see the human cost of unsafe machines, dangerous production quotas, inadequate safety equipment and exposure to toxic chemicals unless a case like that of Matias catches a reporter’s attention.

What’s worse, these conditions are unnecessary. This is one of the conclusions of an important study released by Human Rights Watch. “Blood, Sweat, and Fear: Workers’ Rights in U.S. Meat and Poultry Plants” documents the outrageous incidence of needless disability and death suffered mostly by immigrant workers in this industry, as well as the extent to which industry and Bush administration antipathy to the right to organize has eroded enforcement of basic health and safety standards that unions fought to establish throughout the 20th century.

“Blood, Sweat, and Fear” documents in excruciating detail the rates of traumatic and longer term injury. Workers in the industry now face a one in five chance of severe disability or death on the job–jobs that often lack benefits and decent pay. Just as crucially, the report traces the industry’s concerted and largely successful efforts over the last two decades to disable the once-muscular unions that had previously protected meatpacking and poultry workers from such ferocious injury rates. Indeed, while “injury rates had been in line with other manufacturing sectors with trade union representation … since the breakdown of national bargaining agreements, [meat packing] has become the most dangerous factory job in America.” Referring to industry giant Tyson Foods as the “Wal-Mart” of the industry, the report traces a de-skilling of meat and poultry production that has “reduced every stage in the process to repetitive cutting,” forcing workers to repeat the same motion 30,000 times a day, often with no time to sharpen dull knives or clear dangerous detritus from the work area.

As is the case in other industries, meatpacking and poultry workers have suffered the impact of the Bush administration’s collusion with industry giants like Tyson, a fact that has permitted “government agencies themselves [to] give production priority over worker safety.”

One of the first actions taken by the Bush administration was the repeal of the Occupational Safety and Health Administration (OSHA) Ergonomics Standard adopted by the Clinton administration. This was just the first step in what became a pattern for the administration, which has actively turned its back on worker health and safety in order to placate its corporate allies. For example, as the AFL-CIO pointed out last February, the White House has proposed freezing the budget for OSHA standard enforcement programs, even though OSHA is already so inadequately funded that its staff will only be able to inspect any particular plant an average of once a century.

For FY 2006, the Bush budget proposes to eliminate all funding for union-run worker health and safety training programs. In addition, the Bush administration has shut down the development of new workplace rules on exposure to cancer-causing substances, reactive chemicals and infectious diseases such as tuberculosis. It has refused to issue a rule requiring employers to pay for the sort of personal protective equipment that could prevent thousands of injuries to the mostly immigrant, mostly low-wage workforce in industries like meat processing.

In another obvious favor to corporations, the administration repealed the OSHA rule requiring musculoskeletal disorders to be reported on workplace injury rate logs, and made enforcement of existing ergonomic standards “voluntary” rather than mandatory.

The degree of administration contempt for worker safety was perhaps most evident when, in January 2002, President Bush appointed as acting solicitor of labor one Eugene Scalia, the son of Supreme Court Justice Antonin Scalia and a member of the arch-conservative Federalist Society. The solicitor of labor is the federal attorney responsible for implementing and enforcing workplace safety, wage and hour, pension security, and other critically important protections. But Scalia was apparently nominated by Bush precisely because of what AFL-CIO President John Sweeney has termed his “extreme and relentless opposition to ergonomics protections and other worker protection initiatives.”

Scalia’s opposition was evident in a paper published by the Cato Institute in June of 2000, in which he belittled carpal tunnel syndrome and other RSI injuries as “subjective” and dismissed ergonomics as a “questionable science.” Only after a concerted effort by labor unions and Senate Democrats was Scalia forced from the Department of Labor in 2003. His resignation was lamented by, among others, the National Right to Work Foundation and Bush’s secretary of labor, Elaine Chao.

Given that we’re all going to suffer another four years of this administration’s relentless anti-worker agenda, we would do well to recognize that the injuries faced by those who process our hamburgers and chicken are ever closer to becoming “injuries to all.”

Jamie Daniel is the Director of Organizing and Development at UPI Local 4100, IFT/AFT and a co-chair of the Chicago Center for Working Class Studies.