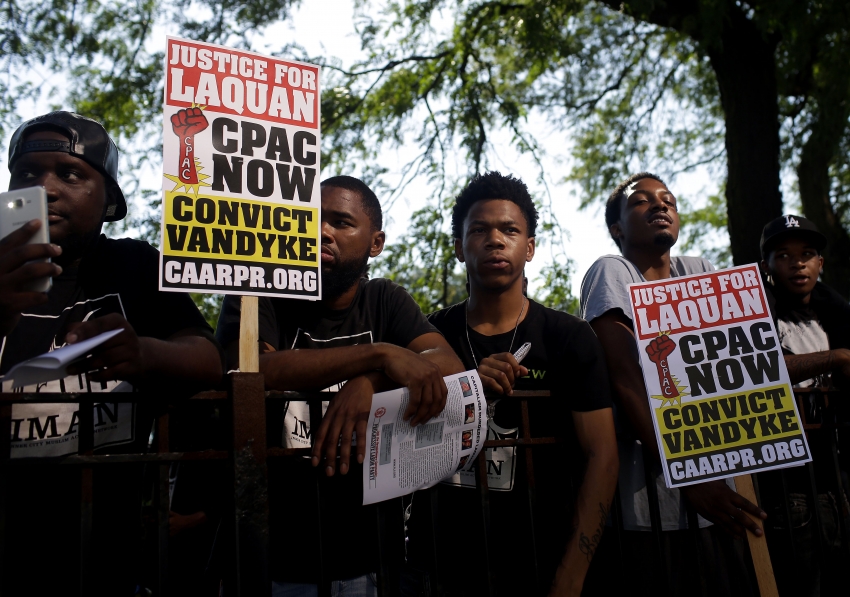 What It Will Take To Bring Real Justice for Laquan McDonald

“Had CPAC been in place, Laquan McDonald may very well be alive today.”

Chicago Mayor Rahm Emanuel once framed the fatal shooting of 17-year-old Laquan McDonald by the hands of white Chicago police officer Jason Van Dyke as a case of one bad cop who deserved to be punished, stating “One individual needs to be held accountable. [He] needs to be held accountable for what [he’s] done.” But the over 100 people who gathered outside the Cook County Criminal Courthouse for a rally marking the start of Van Dyke’s trial last week—almost three years since the release of dashcam footage which captured 16 shots unloaded into a fleeing McDonald—disagree. To them, justice for Laquan McDonald doesn’t end with convicting Van Dyke. Instead, it means making the whole system accountable.

Organizers for the Civilian Police Accountability Council (CPAC), one of the lead groups behind the courthouse demonstration, has a plan to do just that. CPAC organizers are demanding the implementation of a committee made up of elected individuals that would replace the current police board and handle its discipline policies, civilian complaint investigations, the department’s budget and more.

“[The council] would change the role that the police are playing on the streets,” says Kit Brennen, an organizer for CPAC. “Right now, their whole job is designed to protect white people and private property and to repress and psychologically terrorize poor people and black people and brown people. We need to reorient the whole police system in Chicago. The only way to do that is to give communities control over the police.”

And the campaign for CPAC is picking up speed, according to Frank Chapman, a lead organizer in the movement. He points to the electoral defeat of former State’s Attorney Anita Alvarez, the termination of Police Superintendent Garry McCarthy, and even Rahm Emanuel’s surprise decision not to seek reelection, as results of their organizing.

“The day before this trial, the mayor decides not to run for reelection,” says Chapman, “you think that doesn’t have anything to with the murder of Laquan McDonald? If you don’t, then think again, because it does.”

This is the same mayor who, alongside the city’s lawyers, fought for 13 months to suppress the video used to indict Van Dyke on first-degree murder charges before a Cook County judge finally ordered the tapes to be released. That release resulted in a $5 million settlement between the city and McDonald’s family, despite them never having even filed a lawsuit.

The time of the settlement, April 2015, is when Emanuel claims to have been fully briefed on the case. However, official city calendars and emails between the mayor’s closest aides show that top staffers were aware of key details, such as falsified police blotters that report Van Dyke fired a single shot when the autopsy indicated 15 more. Many have claimed these falsified reports are a part of a cover-up designed to protect offending officers, as is alleged in a July lawsuit brought against three officers involved with filing the reports, which could expand to include city officials accused of misleading the public.

“Not only was Mayor Emanuel involved in covering up this hideous crime for 400 days,” says Chapman, “but many other levels of government were involved. The city’s law department, individual police officers who wrote false reports, the fraternal order of police sheltered [Van Dyke] and gave him paid desk work, and the City Council signed off on the $5 million settlement provided that Laquan’s family kept quiet.”

If the cops involved with McDonald’s case are convicted of criminal conspiracy, it wouldn’t be the first time the Chicago Police Department conspired to protect one of their own. In June, a jury awarded Jacques Rivera $17 million and an exoneration after having been kept in prison for 21 years. The jury found that Rivera was framed by police detective Reynaldo Guevara for a murder he didn’t commit in 1988 and that Rivera’s constitutional rights had been denied when the CPD withheld documents from his defense attorney. Guevara is responsible for nearly 20 wrongful conviction cases, a number that continues to grow as more and more people move to have their cases reheard. Esther Hernandez, the mother of two men captured by Guevara in 1997, spoke out against Van Dyke at CPAC’s rally outside the courthouse on September 5.

In front of the chanting crowd, Hernandez said, “[The police] cover up the truth. They stick up for each other. Innocent people are in jail for crimes they didn’t commit, while the killers are out here!”

“We have to fight for our democratic right to say who polices our communities and how our communities are policed,” says Chapman, “And that has to be an uncompromising fight to the finish. There will be more Laquan McDonalds and more Jason Van Dykes if we don’t get control of the situation.”

Van Dyke isn’t the only Chicago police officer in recent memory to shoot 16 times at a fleeing victim. Last year, Marco Proano was sentenced to five years in federal prison for unloading his weapon into a car full of teenagers when the driver backed up after their stolen car was stopped for speeding. Proano’s attorney, Daniel Herbert, himself a former cop, is also representing Van Dyke.

Van Dyke had never fired his gun on duty before killing McDonald, but it wasn’t his first case of police misconduct. In fact, the number of civilian complaints brought against Van Dyke from 2002 to 2014 place him in the top three percent of cops. This includes a case of police brutality that cost the city $500,000 in a civil settlement. He never received any disciplinary punishment for these complaints.

“Had CPAC been in place, Laquan McDonald may very well be alive today,” said Brennen. “If Van Dyke was already under scrutiny [from civilian complaints], he would be under investigation by people who answer directly to the community, which is not how it works right now. [Instead], cases are handled by the same people who knew he was dangerous and therefore have an incentive to cover it up.”

The fallout from McDoanld’s death prompted a review of the Chicago Police Department by the Department of Justice (DOJ) which found that fewer than two percent of police misconduct complaints were sustained, and 98 percent of complaints went without disciplinary action. The DOJ concluded that the city does not investigate cases it is required by law to investigate, the few investigations that occur are seriously flawed, and there exists a code of silence among officers which extends to lying and concealing evidence that obstructs efforts to make cops accountable for misconduct. Among their recommendations to the city is reforming the Police Board, the same structure which CPAC would replace.

Convicting Van Dyke would punish an officer for the crime he committed, but how would that bring justice for Laquan McDonald? CPAC organizers argue that it won’t.

“What makes Chicago the epicenter of the fight against police violence isn’t just the murder of Laquan,” says Chapman. “There’s nothing exceptional or extraordinary about police killing black people. What happened in this one case was the exposure of the entire system. We’re not saying that this murder is unique. They were doing what they normally do, but this time they got caught.”

Across the country, police reform activists are closely following the Van Dyke trial. They’re also watching CPAC, which organized with over ten cities from New York to Saint Louis in solidarity with their campaign, which they hope will serve as a model throughout the United States. Whether it be rallies in Tampa, marches in New York City, statements of solidarity from the NAACP in Houston, or a banner drop in San Francisco, people across the country are showing up to support this movement’s message. According to organizers, that movement doesn’t end with a Van Dyke conviction—it ends with community control of the police.

David North is a summer 2018 In These Times intern.