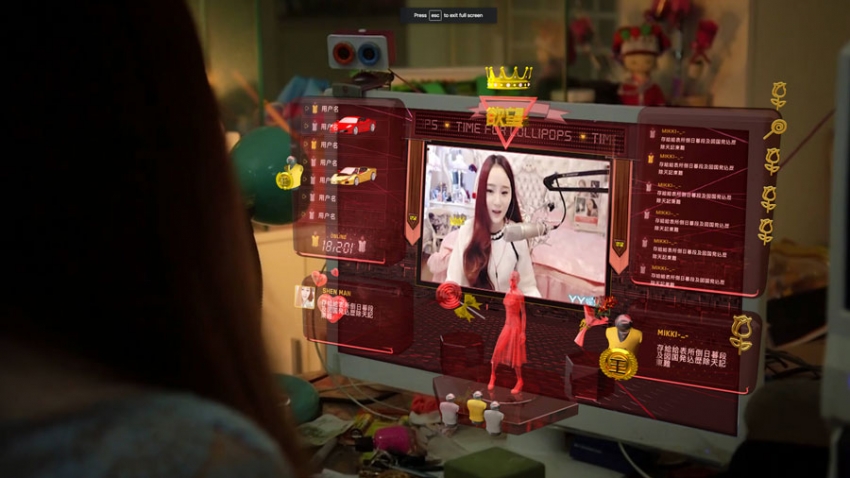 Chinese livestreamer Shen Man made tens of thousands of dollars per month hosting streams on the social network YY.

China’s Digitized Abyss: YY and the Void of Online Fame

It’s the massive number of fans, coupled with the obvious catastrophic loneliness and blind devotionalism, that makes Wu’s film so haunting.

It’s still possible for a person, perhaps of a certain age and proclivity, to glide along in this country and not be entirely subsumed by digital culture. As a result, many of us are only glancingly aware of its true depth and breadth. Reading magazines online, like this one, is a mere toe dipped in a dark ocean of the virtual world.

We may not be long for this respite. It’s already vanishing for a huge chunk of China, as Hao Wu’s new documentary People’s Republic of Desire makes startlingly clear, even as it itself adds to the digitized abyss. The film wades into a very specific subculture thriving in China, where the country’s migratory wave, capitalist voraciousness and sudden wealth have apparently driven people insane.

Meet the “live streaming host,” a Chinese phenomenon that seems, on the surface, akin to Twitch, the hugely popular, Amazon-owned live-gaming platform. With more than 100 million viewers a month, Twitch itself might seem nightmarish enough, but at least you’re watching something—a “celebrity” playing a video game. One of the most popular streamers, Ninja, earns over half a million dollars a month.

In China, by comparison, on the platform YY, the hosts in question don’t actually do much. Sitting in tiny, sparsely decorated rooms in front of large microphones, they regale their viewers, sometimes telling the occasional joke or singing the occasional song. Mostly, the hosts respond to posted comments, many of them desperately sexual. It’s not far from livestreaming porn, the entertainment value of which is much more obvious. In all cases, what’s crucial is the real-time interactions with fans, from whom donations big and small are relentlessly solicited. The hosts rally their devoted but-fickle viewers (300 million strong) to send them money, simply because that’s how the fandom is displayed and sanctified.

In its busy, immersive fabric, Wu’s film follows several working-class fans and tracks how much they spend on their host relationships, even contrasting their earnings: a fan’s $400 a month versus a host’s $60,000. As you can sense, there’s no effort to put a mask on the subculture’s obsession with money, which measures all things, down to someone’s ability to exhibit virtual love for a “celebrity” they’ve never met.

Besides the host and the diaosi (“losers,” an insult the fans appropriated for themselves), there’s a third corner to this “three-way” relationship: tuhao, a slang term for China’s new ultrarich, who lavish absurd amounts of money on the hosts and are worshipped on air by name, because of the size of their donations. Poor diaosis root for the tuhao, too, simply to feel connected to this larger celebrity dynamic despite the fact that it’s self-perpetuating, largely empty of content and defined entirely by money flowing in one direction—toward the host.

Two livestreaming hosts are followed in detail: Shen Man, a flirtatious, early-20s ex-nurse who’s bitterly supporting her entire lazy family with her extreme earnings and who entertains her audience with on-air discussions about prospective breast-enlargement surgery, and Big Li, a flabby, mid-20s “comedian.” Both are multimillionaires, top of their games, but both of their ascendant fortunes are vulnerable to the vagaries of fan mass-think and rumor-mongering, which can shift in an instant like a murmurating cloud of starlings.

The film’s second half takes up with YY’s annual host competition, which is like a telethon for the already filthy rich. The event triggers pathological team spirit among the fans.

It’s the massive number of fans, coupled with the obvious catastrophic loneliness and blind devotionalism, that makes Wu’s film so haunting. (It’s certainly not Wu’s headachey visual approach, which uses way too much CGI to portray the experience of real-time chat-streaming culture as a frantic, avatar-animated, disco-beat Tron world.)

It doesn’t require a great leap to imagine YY and its 300 million users as the atomized, desocialized future of humanity: drones born with screens in their hands and buds in their ears, favoring virtuality over reality’s “meatworld,” as the film calls it. In fact, this scenario has already played out in an episode of Black Mirror, “Fifteen Million Merits,” in which an online popularity contest destroys the characters’ lives. It’s not sci-fi in Wu’s film, where people’s lives are already reduced to an online interface, a keyboard and a desire to follow.