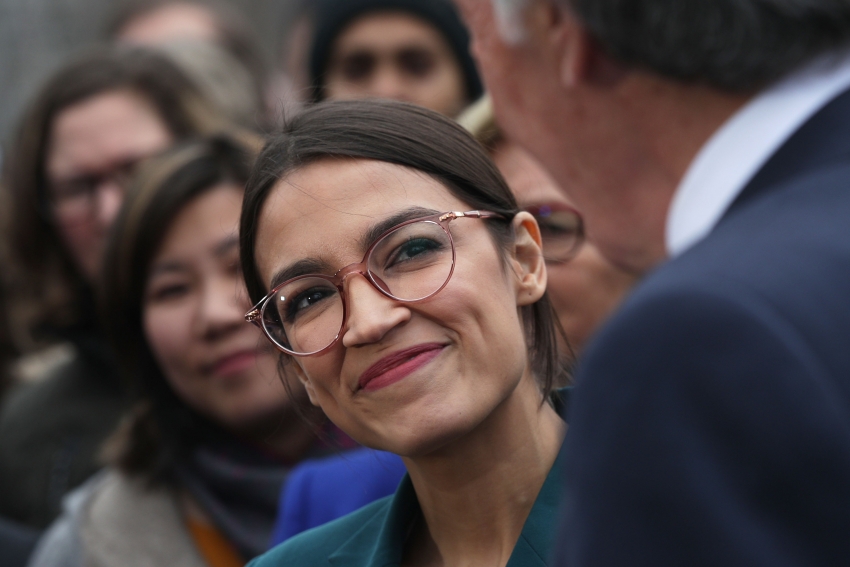 Alexandria Ocasio-Cortez did not come to Washington to play. (MANDEL NGAN/AFP/Getty Images)

By taking the demand straight to the halls of power, Ocasio-Cortez is building support for a policy that could stave off climate change and transform the economy.

By shining a spotlight on what would normally be an internal process decision, Ocasio-Cortez has turned the Green New Deal Committee creation into a referendum on the populist progressive agenda.

Alexandria Ocasio-Cortez hasn’t yet been sworn in as a representative in Congress, but she’s already making waves in Washington, D.C. Earlier this month, Ocasio-Cortez joined a group of protesters from the climate justice group Sunrise Movement at the D.C. offices of Nancy Pelosi. The protesters were demanding that the likely next Speaker of the House create a Select Committee with a mandate to draft legislation for a bold Green New Deal to tackle climate change by 2020. Ocasio-Cortez followed up the action by releasing a specific resolution for the creation of the Select Committee.

While protests targeting members of Congress are not unusual, it is extremely uncommon for them to include fellow elected representatives, particularly someone fresh to their office. Many liberal pundits reacted negatively to Ocasio-Cortez’s participation, accusing her of grandstanding rather than engaging in productive collaboration with her new colleagues.

But Ocasio-Cortez’s actions actually demonstrate a highly sophisticated strategy—both for advancing policy and for building power in Washington.

A Green New Deal is not a cautious policy proposal—it involves implementing a massive public works program with the goal of radically overhauling the United States’ infrastructure to produce 100 percent renewable energy within 10 years. It also includes ambitious proposals for eliminating poverty and significantly decreasing economic inequality through policies like a federal jobs guarantee and a universal basic income. If you believe, as the recent UN Intergovernmental Panel on Climate Change report warns, that climate change is an impending, existential threat, the Green New Deal is a policy that matches the scope and urgency of the challenge.

Passing legislation of this magnitude will be a massive undertaking, both in hammering out the policy specifics and building buy-in for the proposal. It took Democrats nearly a year to pass the Affordable Care Act, even with control of both chambers of Congress. If Democrats are able to take back the Senate and the presidency in 2020, even if they immediately started work on a Green New Deal as their top priority, there’s a good chance nothing close to the policy would be passed until 2022 or later. By creating a Select Committee now, Democrats can get a jump start on figuring out what actually goes into a Green New Deal and building support among legislators to move quickly toward enacting it once they regain power.

But beyond the policy rationale, Ocasio-Cortez’s push for a Green New Deal is also smart politics. The Representative-elect has quickly become a leading figure for populist Democrats who are advocating a far more radical approach to policy-making than the incrementalism typically seen in Congress. With signs that likely-Speaker Pelosi is planning to legislate with a conservative approach, many on the Left fear the momentum they’ve been building through movement organizing and elections of insurgent candidates will not translate into a bold Democratic agenda.

In a system based on seniority for determining Congressional Committee assignments, Ocasio-Cortez has very little procedural power as a legislator to influence the party’s agenda. If she were to follow the typical path for a newly elected member of Congress, it would be years before she would have any significant influence on larger decisions. But her massive popular support could potentially translate into a different kind of power that exists outside of traditional congressional operations.

By shining a spotlight on what would normally be an internal process decision, Ocasio-Cortez has turned the Green New Deal Committee creation into a referendum on the populist progressive agenda. While creating the committee is a fairly modest ask in practical terms (since it doesn’t involve actually enacting legislation), it now has significant implications around the message it sends on how big the Democratic Party will go. With Democrats alone controlling committee decisions, Pelosi and other Democratic representatives now must choose whether to embrace the left wing of the party by creating the committee or to reject it—and run the risk of losing donations, votes, and perhaps even primary elections, as Ocasio-Cortez herself demonstrated by defeating Rep. Joe Crowley, previous Chair of the House Democratic Caucus.

Critics of Ocasio-Cortez’s actions often seem put off or confused that she would take such a confrontational approach as a new legislator, rather than putting in her dues by following a more traditional path. But this perspective misses the fact that Ocasio-Cortez’s election was a clear mandate for more radical politics—an activist outsider with a bold agenda unseating a senior party insider representing politics-as-usual. She rightly believes she has a responsibility to go big, using whatever tools are available to her. And if she can win a victory right out of the gate, it will create momentum for the many political fights to come.

So far, the approach seems to be working. Fifteen House representatives have already come on board to endorse the creation of the Select Committee for a Green New Deal, giving the proposal a big boost in legitimacy. Whether or not Rep. Pelosi will ultimately back the effort remains to be seen, but one thing is already clear—Alexandria Ocasio-Cortez is changing the status quo Washington.