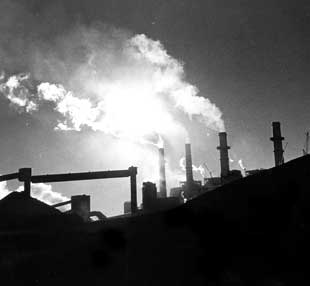 Environmentalism is dead. Whats next?

The Pig People Don't Talk to the Chicken People

When the U.S. Senate voted to allow drilling in the Arctic National Wildlife Refuge this past March, a casual observer might have expected the leaders of the environmental movement to curl up into the fetal position and start making plans to build their own personal arks. Instead, within hours, e-mails from the leaders of the nation’s environmental groups quickly spread out to their members, announcing their defeat.

“I am not going to soft-pedal today’s defeat,” wrote John Adams to the Natural Resource Defense Council’s mailing list. “It is distressing that pro-oil forces, significantly strengthened by last November’s election, were able to pass this terrible bill in the Senate, where we’ve blocked them before.” Similar sentiment was echoed by John Flicker, president of the National Audubon Society, who wrote this to his staff and board: “Over the last several years we have faced one challenge after another defending the Refuge, including a similar vote in the last Congress which we won.”

Decidedly missing from environmental leaders’ post-defeat e-mails, however, was any admission that it was time to go back to the drawing board.

A vaguely post-coital glow emanated from conservatives in the wake of their 2004 electoral victories, which had given them the leverage to trounce the greatest symbol of America’s uncompleted environmental agenda. Since the 1980 passage of the Alaska National Interest Lands Conservation Act, the Arctic National Wildlife Refuge–the 1.5 million acre area that comprises the breeding ground of the Porcupine Caribou Herd–had been left in limbo. With the highly symbolic battle over the Arctic Refuge won, conservatives are now free to kick-start America’s nuclear power binge, expand coal-bed methane mining in the Rocky Mountain West and ensure that no serious efforts to combat global warming will ever see the light of day.

Over the past year, I, along with Michael Shellenberger, Ted Nordhaus and Peter Teague, whose work appears on these pages, have made the argument that environmentalism is dead in America. The purpose of describing the environmental movement as dead is to allow the space for a new movement to grow–a new movement that does not set arbitrary limitations for what is considered an “environmental issue,” in service of building a larger progressive movement.

It’s time for environmentalists to step outside the limits of an artificially narrow discourse to articulate a more expansive, more inclusive and more compelling vision for the future. In doing so, they will cease to be environmentalists and start to become American progressives.

For at least the last 25 years, environmentalists have joined American liberals in defining themselves according to a set of problems, whether they be class, race, gender or the environment. We have spent far less time defining ourselves according to the values that unite us, such as shared prosperity, social progress, interdependence, fairness, increasing equality and ecological restoration. We can no longer afford to allow the laundry list of liberal “-isms” to divide our world. I have come to believe that our future successes will come not from our ability to shock, but to inspire.

The mother of all environmentalists

Modern environmentalism was born in the early ’60s in the form of scientist and writer Rachel Carson. Carson offered what was at the time an astounding thesis: The chemicals that were supposed to be protecting us were in fact threatening to kill us. Carson identified the chemical pesticide DDT in weakened egg shells of arctic birds, and used this evidence to promote removing injurious chemicals from our world. Her strategy was to awaken the public by contrasting a dream of the present to a nightmare of the future, and her solutions were framed in the negative–a world without pesticides, without life-killing substances. The proposals that followed were technical policy fixes for regulating poisons and pollutants, but they lacked an overarching narrative grounded in core American values. This technical tradition, which was powerfully successful in the early days of environmentalism, formed the basis for modern environmentalism.

Environmentalists promoted a regulatory paradigm, not a narrative for the country’s success. While liberals were defining themselves in opposition to the problems that were besetting a modernizing America, conservatives began to construct a movement that envisioned an optimistic America that would appear better and stronger than ever.

Some of the things they have been taught not to think of when they think of the environment are AIDS in Africa, taxes, highways, homeless people, asthma, good jobs and the war in Iraq. Each of those things–“environmental” or not–are stripped by American environmentalism of their native habitat, their context and their web of connections. They are single “issues,” each requiring its own movement, its own experts and its own funding source.

All categories and words should be understood as tools, not as symbols of real things. This was the simple point made by Ferdinand de Saussure at the dawn of the semiotics movement. Categories–indeed, all of language–should be evaluated not for their timeless ability to represent a truth that, like the fiction of nature, is “out there,” but rather for their ability to meet our present needs.

A reasonable case can be made that environmental activists needed to put baby seals, redwoods, Yellowstone and nuclear waste under the brand of “environmentalism” in order to pass a raft of environmental laws in the ’70s. With the support of the American people, the Congress and even Richard Nixon, the environmental movement was able to pass the Clean Air Act, Clean Water Act, the Endangered Species Act, and the National Environmental Policy Act, which created the Environmental Protection Agency.

But for at least 25 years, and maybe longer, the basic categorical assumptions that underlie environmentalism have inhibited the movement’s ability to consider opportunities outside environmental boundaries that would allow American progressives to compete more effectively with conservatives.

Consider that the environmental movement achieved its greatest successes before it had hundreds of lobbyists, communications experts and policy wonks, before organizations had paid memberships of millions of people. The idea of cleaning the smoky skies and cleaning the water was powerful, immediate and achievable. In retrospect, the decision to fund sewage systems in America’s cities and to protect America’s rare wildlife seems obvious. But along with the victories of the ’70s, the environmental movement learned lessons that it has failed to unlearn as the political context changed over the years.

Michael Shellenberger and Ted Nordhaus described the process of environmental policy-making in the October 2004 paper, The Death of Environmentalism:

By the American bicentennial, this kind of environmentalism had triumphed. Sweeping protections were put in place, and the focus was now as much on implementation through the courts as it was on new legislation in Congress.

Environmental leaders freely acknowledge that their “issue”–this thing we call “the environment”–is not a major priority for Americans. When pressed to choose between two candidates, environmental concerns are rarely a deciding factor. This was especially apparent in the campaign leading up to last November’s elections. Only a few environmental organizations even entered the political arena.

The environmental groups that did enter the political debate spent millions of dollars on TV ads and grassroots mobilization. Yet they had little effect on the outcome of the election. Why? They largely focused on their “issues” rather than on techniques that would have had a greater effect. The National Rifle Association, on the other hand, ran ads in pro-gun-control districts in Colorado on the issue of taxes.

Despite these failures, the lesson many environmental leaders are taking from the election is that we must talk louder and fight harder–with the same words and the same tools.

Environmentalists aren’t the only ones clinging to an identity separate from progressivism. Each of liberalism’s special interests has its own experts, its own professionals, its own lobbyists, its own lawyers, its own funders, its own mailing lists and its journalistic beat. The more that each fights to establish itself as “above politics,” the more each reinforces its special-interest status. In seeking to distinguish the interest categories, each group looks askance at the other, as though any association–any interconnectedness–with other progressives would diminish their special powers.

The picture for progressives, in this context, seems grim. But if there’s one lesson to learn from conservatives, it’s that moments of defeat are an opportunity for a turnaround. Forty years ago, things also looked grim for conservatives. Their debates over conservatism foreshadowed our debates today over liberalism. Should conservatives moderate their views and become Democrat-lite? Should they embrace a kinder, gentler New Deal? Or did they need to declare the death of conservatism so they could build a neo-conservative movement? Like liberals today, conservatives wrung their hands over these debates, fretting that the “circular firing squads” would lead to permanent minority status.

It’s been months since the elections, and there is still no real debate among liberals and Democrats about what went wrong, not just with Kerry’s campaign, but with liberalism and all of its sister-isms. Liberals pulled out all of the stops in their election efforts, yet it was not nearly enough to counter the growing trend in America’s conservative social values. In order to start winning elections, we need to construct an aspirational ideology as powerful as liberalism once was, and as powerful as fundamentalism is today. We need to accept that the needs of most Americans have changed since the dawn of American liberalism. Technological change, credit debt, depression and time-stress are the modern American plagues. Life is still not easy in America, and people still suffer, but the optics have changed. We need to construct a new progressive ideology that recognizes that Americans yearn for an ideology that provides a deeper fulfillment, instead of focusing solely on enhancing our political tactics.

Many in our movements preach the value of free speech, open dialogue and debate, yet as soon as somebody challenges our most basic assumptions, or dares to level a public criticism at the liberal powers-that-be, they are barked down. When we’re simultaneously losing on nearly every one of our so-called “issues”–abortion, civil rights, the environment, the economy, foreign policy–questioning everything should no longer be our right, it should be our responsibility.

The problem is not that environmentalism and the moral intellectual framework we call liberalism are dead. The problem is that we have been in denial about it for more than 20 years. The sooner we acknowledge these deaths, the sooner we can give birth to something more powerful and relevant.

Parts of this article were adapted from Werbach’s Commonwealth Club speech, “Is Environmentalism Dead?”

Adam Werbach is the executive director of the Common Assets Defense Fund and a member of the San Francisco Public Utilities Commission. He is a former president of the Sierra Club, a position to which he was elected at the age of 23.