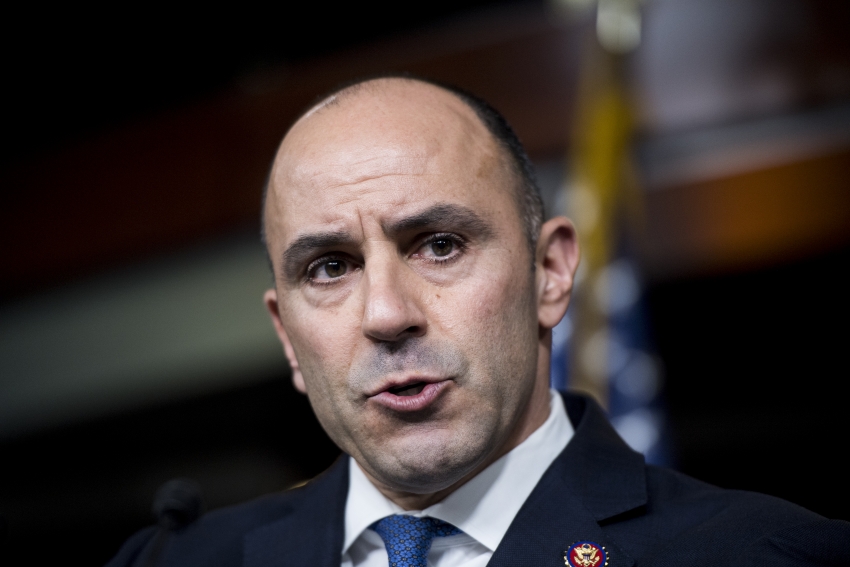 Rep. Jimmy Panetta, D-Calif., speaks during the House Democrats' news conference on the NATO Support Act before its consideration on the House floor on Tuesday, Jan. 22, 2019. (Photo By Bill Clark/CQ Roll Call)

A little-noticed amendment allows for continued U.S. intelligence sharing with Saudi Arabia, undermining the push to halt all U.S. participation in the war.

"This could undermine the intent of the bill to protect Yemeni civilians from U.S.-assisted Saudi bombing."

Wednesday’s overwhelming U.S. House vote (248-177) in favor of a War Powers resolution to end U.S. participation in the Saudi-led war on Yemen was no doubt a win for peace activists. But the victory was partially undercut by a little-noticed amendment introduced by Rep. Ken Buck (R-Colo.)—passed with support from 57 Democrats—that allows for continued U.S. intelligence sharing with Saudi Arabia.

Remarkably, 13 members of the Congressional Progressive Caucus (CPC), voted to support the amendment, a position to the right of the hawkish Democratic Reps. Eliot Engel (N.Y.) and Steny Hoyer (Md.). They are:

Nine of these representatives are freshmen.

The Buck Amendment states that the President is able to share intelligence with any foreign country provided that “the President determines such sharing is appropriate and in the national security interests of the United States.”

According to Robert Naiman, policy director for Just Foreign Policy, which has been agitating to end the Yemen War, “The Buck Amendment could be interpreted by the Trump Administration as Congressional permission to continue sharing intelligence with the Saudi regime that the Saudi regime uses to carry out airstrikes against civilian targets in Yemen in areas under the control of Houthi forces. This could undermine the intent of the bill to protect Yemeni civilians from U.S.-assisted Saudi bombing, and undermine the Constitution's prohibition against U.S. participation in wars that have not been authorized by Congress.”

On the House floor, Buck claimed that his amendment was needed because the sharing of intelligence has allowed Saudi Arabia to reduce civilian casualties. “I want to make sure that we’re doing everything we can to avoid the humanitarian crisis there, at the same time we recognize the geopolitical significance of our relationship with Saudi Arabia,” said Buck.

Yet, the United States has long been aware of civilian casualties in the war while continuing to support the offensive. According to a Reuters report in 2016, under the Obama administration, State Department officials privately expressed concern that the U.S. government could be implicating itself in war crimes for its participation in the war. But this concern didn’t stop the Obama administration from refueling the military coalition’s bomber planes, helping identify targets and supplying arms.

Jehan Hakim, director of the Yemeni Alliance Committee, a group of Yemeni-American organizers that initially formed to oppose Trump’s Muslim ban, tells In These Times that Buck’s assertion is a lie. “The resolution with the Buck Amendment will continue to increase civilian casualties,” she says. “It's been almost four years that we have been supporting the Saudi led coalition and the rate of civilian casualties continues to rise. I think the American people deserve to know that the Saudi-led airstrikes that have been backed and supported by the United States have definitely increased civilian casualties.”

The 13 members of the CPC who voted in favor of the Buck Amendment did so despite the fact that the CPC whipped against it, and even Rep. Adam Schiff (Calif.), the House Intelligence Committee Chairman who has distinguished himself as a leading anti-Russia hawk, told Democratic offices he opposed the resolution. Peace campaigners say the CPC likely swayed these powerful Democrats—but not freshman who rode the “blue wave” to Congress.

“It's really disheartening to see that even with our new progressive Congress there was a majority vote in accepting that amendment,” says Hakim. “It watered down the resolution’s intent to reduce harm on the ground.”

Rep. Ro Khanna (D-Calif.) has been fighting for two years to pass the resolution, which “directs the President to remove U.S. Armed Forces from hostilities in or affecting Yemen within 30 days unless Congress authorizes a later withdrawal date, issues a declaration of war, or specifically authorizes the use of the Armed Forces.” The resolution, however, does not pertain to military actions supposedly used to combat al-Qaeda.

In addition to the Buck amendment, the resolution suffered a blow when another proposed change failed to even reach a vote. Rep. Jim McGovern (D-Mass.) was expected to introduce an amendment that would have strengthened Khanna’s bill by clearly stating that the Trump administration must “remove United States Armed Forces from hostilities directed at Houthi forces in or affecting the Republic of Yemen.” Ultimately, the McGovern amendment never hit the floor over concerns that the modified version of the bill would have a more difficult time passing.

Less than two months after Washington Post journalist Jamal Khashoggi was brutally killed by the Saudi government last October, the Senate voted to end military aid to the kingdom, pushing back against Trump's broad assertion of war powers. Khanna’s bill was blocked that same month by then-House Speaker Paul Ryan (R-Wisc.), who added a rider to the annual farm bill stripping Khanna’s bill of the War Powers Act status it needed to move forward.

The Trump administration claimed on November 9 that the United States has stopped assisting with mid-air refueling of bomber aircrafts—but has not provided sufficient public evidence to prove this is the case. Meanwhile, Trump claims the authority to reverse this decision at any time.

The U.S.-Saudi war began in 2015 after Houthi rebels drove out the U.S.-backed government of President Abdu Rabbu Mansour Hadi. According to the Armed Conflict Location and Event Data Project (ACLED), the death toll in Yemen has been severely understated. While some sources regularly report a number of 10,000 deaths, ACLED’s data suggests the number is somewhere between 56,000 and 80,000.

According to ACLED, the U.S.-backed Saudi-led coalition carried out 3,362 airstrikes in Yemen during 2018, and 420 of the bombings were carried out on residential areas. In August 2018, a coalition bomb was dropped on a school bus, killing 54 people, 44 of them children. A 2018 Save the Children report estimates that 85,000 children under the age of 5 have starved to death as a result of the war.

Khanna’s bill will now head back to the Senate to be voted on once again. Last week, the Trump administration threatened to block the resolution and the Senate vote might lead to the first veto of Trump’s presidency.

“We're calling this a win because it's a War Powers Resolution,” says Hakim. “Yes, it is watered down, but we're hoping the Senate will pass the original resolution without the amendment. We are going to continue to fight this until we are really withdrawing support.”

Sarah Lazare is web editor at In These Times. She comes from a background in independent journalism for publications including The Intercept, The Nation, and Tom Dispatch. She tweets at @sarahlazare Michael Arria covers labor and social movements. Follow him on Twitter: @michaelarria