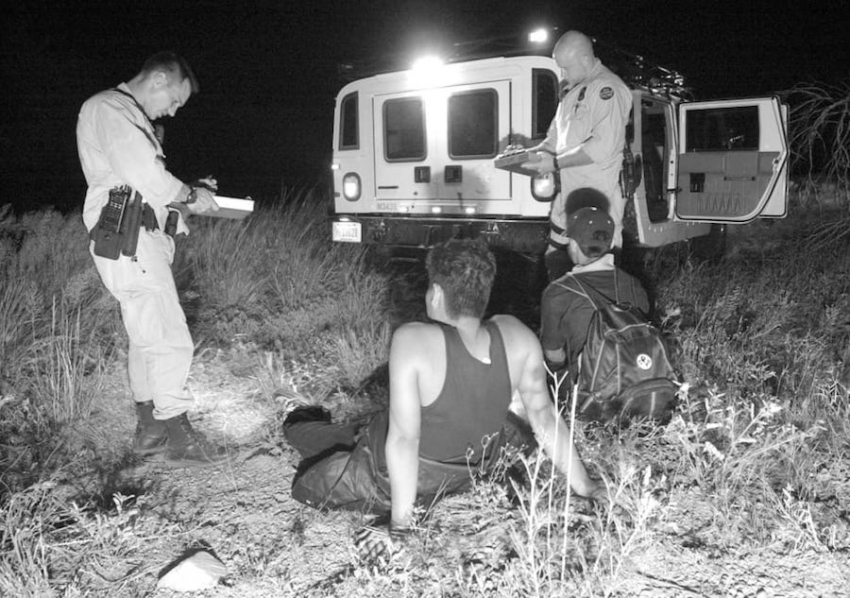 R.M. Arrieta wrote “Roundups Ratcheted” for the July 5, 2004, issue of In These Times. The photo depicts border agents with two undocumented immigrants waiting for transportation in Arizona in 2003.

We Were Against ICE Before It Existed

The criminalization of immigrants goes back well before ICE’s inception.

ICE has always been worthy of abolition—and, indeed, never should have been created in the first place.

Immigration and Customs Enforcement (ICE), the federal police force tasked with arresting and deporting undocumented immigrants, was created in 2003 amid the wave of panic and nativism following 9/11. In the July 5, 2004, issue, two In These Times articles revealed that the new agency’s abuses began right from the start—and in fact, the criminalization of immigrants goes back well before ICE’s inception.

Prior to the creation of the Department of Homeland Security (and, under its umbrella, ICE), immigrant detention centers were under the purview of the Justice Department. In 2004, In These Times published a review of Mark Dow’s American Gulag: Inside U.S. Immigration Prisons. The book documents “cases of abuse and unjust imprisonment in [Immigrant and Naturalization Services (INS)] detention centers dating back to the 1980s and the influx of immigrants from countries like Haiti, Guatemala and El Salvador.”

This environment thrived “because detainees were trapped in a legal netherworld and few outside the detention center walls noticed.” Mistreatment intensified as the number of immigrant detainees steadily rose, from 5,532 in 1994 to 20,000 in 2001.

Following 9/11, the Justice Department expanded the power of INS with a series of draconian measures, including closing immigration hearings to the public and holding detainees without charge for 48 hours (or, in emergency cases, indefinitely).

That expansion set the stage for the creation of ICE and the aggressive home and workplace raids that have since become the face of immigration enforcement.

In the same July 2004 issue, R.M. Arrieta reported for In These Times on nationwide sweeps happening under the moniker “Operation Endgame.” The piece demonstrates that ICE has always been worthy of abolition—and, indeed, never should have been created in the first place.

Eight months ago Operation Endgame was placed on the fast track under the auspices of Immigration and Customs Enforcement, or ICE, the newly formed investigative arm of the Department of Homeland Security … and one of three new bureaus of the former Immigration and Naturalization Service. With a bigger budget and more agents, the mandate is to catch some of the estimated 400,000 undocumented immigrants who have final removal orders and deport them.

Since March, civil rights groups nationwide have reported a marked increase in the questioning, detention and deportation of undocumented immigrants.

During a week in April [2004], nearly 170 people were arrested on the East Coast following three flights from Los Angeles to Newark Liberty and JFK International airports.

In Houston, Texas, rumors of mass immigration raids created such panic in Latino neighborhoods that “they stopped sending their kids to school, stopped attending church, stopped going to work, there was a dramatic shift in the traffic,” says Arnaldo Garcia, of the National Network for Immigrant and Refugee Rights in Oakland, Calif.

According to civil rights organizations, agents have been employing a new tactic that targets one person to gain access to an apartment building or home, and then ends with the detaining and deporting of other undocumented immigrants. This happened May 6 in San Francisco when agents entered the residential Sunrise Hotel to detain a resident who allegedly violated immigration orders.

Agents caught their target, but pressed other residents for their legal status as they walked through the lobby on their way to work. Agents swept up nine undocumented workers; all but one signed voluntary deportation notices.

The raid drew the ire of city officials. San Francisco Supervisors Tom Ammiano and Chris Daly, in whose district the raid took place, introduced a resolution urging the FBI and ICE to stop targeting hardworking immigrants. It passed overwhelmingly. If immigrants are detained, the resolution requires “that access to legal counsel be provided, that they get access to a hearing and that their case be reviewed by a judge.”

“These kinds of raids should not be happening. It is unacceptable that these vulnerable families would have to deal with something like this,” Daly says. …

At 6 a.m. on March 18, agents pounded on Jose Luis Aguilar’s door. When he opened the door, agents forced their way in, according to a report filed by the American Friends Service Committee (AFSC), a national civil rights organization. The agents apparently were trying to capture an undocumented immigrant with a criminal record named Juan Rios. The current resident, Aguilar, knew nothing about Rios.

Even though Aguilar was not the target of their investigation and had no criminal record, agents questioned him and his family about their immigration status. They also questioned his neighbors. In all, a dozen undocumented immigrants were rounded up although authorities never found Rios.

“I never thought this would happen,” says Aguilar.

“Yes, it can happen on the streets, you are vulnerable—but in your own house—no, not without having done anything.”