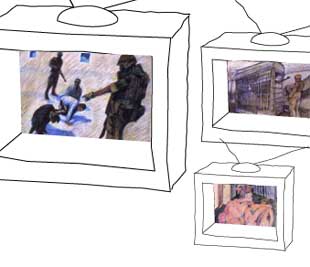 “The Christian in me says it’s wrong,” Army Specialist Charles A. Graner Jr. said of torturing prisoners in Abu Ghraib prison in Iraq. “But the corrections officer in me says I love to make a grown man piss himself.”

Photos taken of him demeaning captives at Abu Ghraib exposed Graner as the sadist that his surroundings allowed him to be. But are the differences between brutal correctional officers like Graner and other Americans as stark as we would like to think?

An acquaintance of mine recently admitted how much he enjoyed watching the torture scenes in the new blockbuster, Sin City. “I know it’s strange,” he said, “but there’s something I get out of seeing torture and violence like that on the screen. It’s like it’s some kind of release.”

He is not alone. Slate’s David Edelstein enthused that the film boasted “the most relentless display of torture and sadism I’ve encountered in a mainstream movie. My reaction to Sin City is easily stated. I loved it. Or, to put it another way, I loved it, I loved it, I loved it. I loved every gorgeous sick disgusting ravishing overbaked blood-spurting artificial frame of it. … It seems pointless to tut-tut over the depravity. Sin City is like a must-have coffee-table book for your interior torture chamber.”

That interior torture chamber is more visible in popular culture than ever before. One of the nation’s most popular network television shows, “24,” opened its season finale with an over-the-top torture scene of a man, forcibly strapped down to a chair, being shocked repeatedly with volts of electricity, screaming and crying out in sheer agony. The scene was so attention-grabbing that it ended up being featured as one of the week’s top events on VH1’s “Best Week Ever.” Torture pops up everywhere these days, even on the latest T-Mobile commercial, which features a young, black man tied down to a chair, screaming in an interrogation-style room as he’s tortured by having his phone bill run up. At the end of the commercial, a smiling Catherine Zeta-Jones delivers her pitch as he stumbles around the store, still bound to the chair.

What accounts for the prevalence and popularity of these scenes of torture and misery? Could these media images be serving as a form of misplaced cathartic release to ease our social conscience, a bizarre way of processing and desensitizing ourselves to real life torture?

Consider that only one-third of Americans questioned in a Washington Post-ABC News poll last May defined what happened at Abu Ghraib as “torture.” Half of those polled believed that such acts of brutality were taking place as a matter of policy in the “war on terrorism.”

Our legislators are no better in this regard. With the notable exception of individuals like Sen. Patrick Leahy (D-Vt.), congressional vows to find out who was responsible for the Abu Ghraib scandal ebbed after the prosecution of a few low-level ranking officers, a few fines and the issuance of a single demotion.

In an exhaustive May 2005 Amnesty International report, “Guantánamo and beyond: the continuing pursuit of unchecked executive power,” the running count of detentions in the global war on terror stands, at least, at 70,000 people, including the known deaths of 27 individuals in U.S. custody since 2002. To take but one example, consider this June 2004 account of Martin Mubanga, a British citizen who was kidnapped by U.S. Forces in Zambia and eventually brought to Guantánamo:

I needed the toilet and I asked the interrogator to let me go. But he just said “you’ll go when I say so.” I told him he had five minutes to get me to the toilet or I was going to go on the floor. He left the room. Finally, I squirmed across the floor and did it in the corner, trying to minimize the mess … He comes back with a mop and dips it in the pool of urine. Then he starts covering me with my own waste, like he’s using a big paint-brush, working methodically, beginning with my feet and ankles, and working his way up my legs. All the while, he’s racially abusing me, cussing me: “Oh, the poor little negro, the poor little nigger.” He seemed to think it was funny.

What such systemic brutality means, on some level, is that Americans bear collective responsibility for the damage our government has done. That’s not an easy thing to contemplate. But the public won’t find any such admission represented on the pages of our commercial newspapers and magazines. Instead we see outrage and compassion about things that we’re not responsible for, the deaths of Terri Schiavo and the Pope, for instance, or the toll of the tsunami.

“We have moments where all that pent up compassion is allowed to release, and you are allowed to care [and have] spasms of outrage and compassion,” Klein said.

Could it be that Americans are subconsciously trying to stay sane by desensitizing themselves and finding cathartic release in endless media depictions of torture and brutality? The U.S. military death toll now nears 2,000 men and women, in addition to the countless thousands of Iraqis and Afghanis who have died. Who among us truly wants to face the emotional impact of what we’ve done?

I asked clinical psychologist Bruce Levine, the author of Commonsense Rebellion, what he thought of all of this. “When you become disconnected from your own alienation [from society], you become cut off from your humanity,” he told me. “You become numb to all kinds of atrocities.”

A crucial mechanism of that numbing process where real-life torture is concerned seems to revolve around the ability to release primal reactions (terror, fear and outrage, for instance) in both a socially condoned and politically non-threatening way. Gorging on the barrage of fictionalized torture imagery has become the easiest and most accessible way for American citizens to do this with the least possible discomfort. Whether consciously or subconsciously, the writers and producers of torture-saturated media play a crucial role in this process, feeding and fueling this perverse and deeply rooted pathology.

These media-produced, sanitized bloodsports have become a thick bandage affixed over the deep and ugly gash of human suffering and cruelty. But that bandage can only stay in place for so long before it begins to rot away.

Real healing and emotional catharsis would actually require genuine discomfort, discourse and reparation. It would necessitate an admission of our collective culpability for the emotional and physical damage inflicted by our government, whether on the streets of Baghdad, or in the interrogation rooms of Abu Ghraib and Guantánamo Bay.

Without such reflection, we’re headed for our own true-to-life Sin City, a veritable carnival of bloodsport, torture and misery for all.