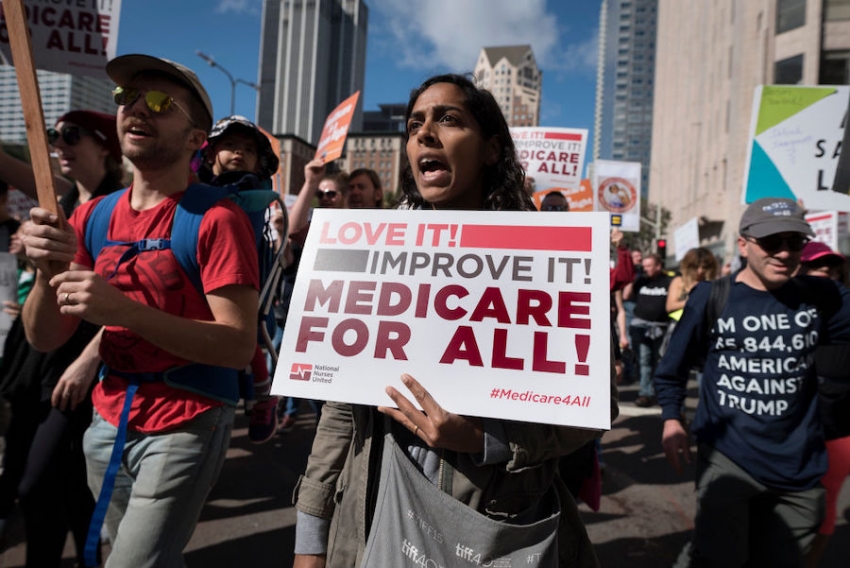 Campaigns for Medicare for All and other progressive demands can help expand voters' imaginations.

Sick of Hearing About Electability? It Will Take Organizing To Expand Our Political Imagination.

To overcome the insistent messaging of the corporate media and Democratic establishment, we need grassroots people power.

Organizing around non-presidential candidates and issues is one way to build relationships and engage in political education, which can build power and raise consciousness for 2020, 2024 and beyond.

Donald Trump launched his presidential campaign with impossible promises, from erecting a massive, Mexican-funded border wall to revitalizing dying industries. Instead of being dismissed as a huckster, he raised Republican voters’ expectations of the possible and normalized the party’s shift to its extreme. Trump’s victory seemed to turn on its head the conventional wisdom that only centrists win general elections.

Centrist Democrats are nonetheless clinging to that conventional wisdom, undermining popular progressive candidates and policies on the grounds that one of their own is the most likely to unseat Donald Trump. As one of Joe Biden’s supporters and fundraisers, South Carolina state Sen. Dick Harpootlian, told Vanity Fair, “This [election] isn’t a battle of ideologies or identity or Medicare for All or a Green New Whatever. It’s all about who can stop this juvenile narcissist from getting a second term.”

To an extent, the Democratic establishment has polling on its side. Biden consistently leads in primary polling, and a Quinnipiac poll from May shows 61% of registered Pennsylvania Democrats think Biden is the most likely to beat Trump. Bernie Sanders is a distant second at 6%; Elizabeth Warren and Kamala Harris are tied at 3%.

In response, the Left can point out that policies such as Medicare for All and the Green New Deal—which Biden does not support, and which several other candidates do—poll well with voters. We can also remind Democrats that campaigning on centrism did not work for John Kerry or Hillary Clinton. It may be early enough in the election cycle that an examination of Biden’s long history of conservative positions, coupled with his current dismissal of millennials and progressive policies, will be enough to dampen perceptions of his electability.

But given the strength of the centrist media establishment, it’s also possible these perceptions will not change. Through week two of Biden’s campaign, for instance, FiveThirtyEight showed him receiving almost as much media coverage as every other Democratic candidate combined. Left media can and should make the case against Biden, but we simply do not have the megaphone needed to counteract the influence of broadcast and cable news.

Instead, we need to find other ways to reach ordinary voters (and nonvoters). Organizing around non-presidential candidates and issues is one way to build relationships, start face-to-face conversations and engage in political education, which can build power and raise consciousness for 2020, 2024 and beyond—not to mention achieve bigger social goals.

That could mean lobbying with National Nurses United on Medicare for All, organizing strikes with the Fight for 15, supporting Black Youth Project 100 in their work against the prison-industrial complex, donating to organizations in hard-hit communities (like Milwaukee’s Black Leaders Organizing for Communities), or volunteering for the Sunrise Movement. Alongside the victories of politicians like Rep. Alexandria Ocasio-Cortez (D-N.Y.) and Rep. Ilhan Omar (D-Minn.), these actions can challenge perceptions about what is possible and who is electable.

Labor organizing should be key to this approach. Many unions engage in political education with their membership, and drive money and volunteers with their endorsements. In 2008, 59% of union households supported Barack Obama—a relative political unknown then running on anti-establishment populism—over John McCain; in 2012, 58% of union households supported Obama over Mitt Romney. But in 2016, union support for Hillary Clinton—seen as a centrist establishment candidate—dropped to 51%.

The question of electability may not be answered until voters go to the polls next year. But if history is any indicator, an “electable” centrist could very well win the primary and fail in the general. Since the formation of the moderate Coalition for a Democratic Majority—more than 40 years ago, in the wake of progressive George McGovern’s loss to Richard Nixon—centrist Democrats have used so-called electability as a weapon. It may take consistent, grassroots organizing to liberate ourselves from it.

Malaika Jabali is a public policy attorney, writer and activist. Her writing on politics, culture and race has appeared in Essence, Jacobin, The Intercept, Glamour and Current Affairs.