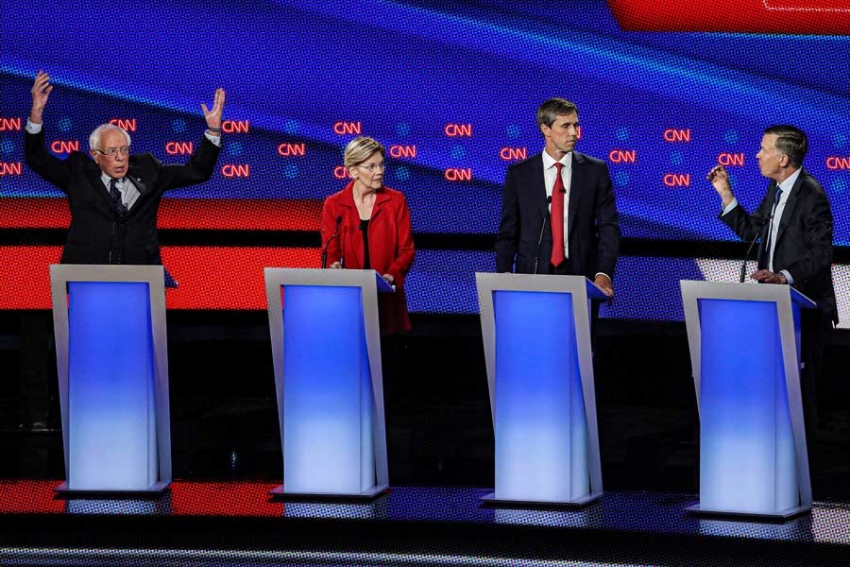 Want To Fix the Debates? Shut Down the Trump-Style Theatrics.

The sensationalist, ratings-first format needs to change—and candidates should boycott debates until it does.

Here’s one thought: Why don’t the Democratic candidates refuse to participate in any more debates until the format is changed?

In his very first question at the July 30 debate, directed at Sen. Bernie Sanders (Vt.), moderator Jake Tapper brought up that former Rep. John Delaney (Md.) had called Medicare for All “political suicide.” The TV cut to a split screen of Sanders and Delaney as Tapper demanded, “What do you say to Congressman Delaney?” In case we missed the challenge, the chyron blared the same question. This format—“What do you say to X about their attacks on you?”—dominated the debates.

Moderators do this, of course, to try to build ratings. They aim for soundbites they can use (and attack) the next day, so they can gossip about who dissed who, who got in the best “zingers” and the like. This superficiality has long been a problem, but it’s gotten much worse since 2016, when Donald Trump’s inflammatory, realityTV approach to politics—vulgar insults, adolescent name-calling, ad hominem attacks on opponents—bushwhacked an unprepared yet enthralled news media. The cable channels, in particular, followed the TV-star candidate’s lead and succumbed to the catfight conventions of celebrity journalism—who has Trump trashed now, who’s betrayed whom, who’s on Trump’s shit list today? As Vanity Fair noted, Trump understands the press is “essentially a sensationalistic enterprise,” and made the media “complicit in a highly choreographed distraction.” This lazy and contaminating format has further corrupted the debates.

The Democratic candidates should see this spectacle for what it is: a Trumpian-driven frame that, with its leading, biased gotcha questions, incessant interruptions, and stoking of divisions, results in a circular firing squad, damaging them all. Here’s one thought: Why don’t the Democratic candidates refuse to participate in any more debates until the format is changed?

The first needed change is getting rid of broadcast journalists as the moderators. Their job is to report breaking news and produce ratings, as well as burnish their own celebrity, not to illuminate the substance of policy proposals. Voters, at town halls or online, ask better, more policy-oriented questions than preening and self-serving TV news stars. Questions proposed by voters to the Open Debate Coalition in 2016 eschewed “horse race” queries and instead focused on issues like gun safety, money in politics and climate change. Voters’ questions would make the debates more democratic and more informative. Kathleen Hall Jamieson, a researcher on political campaigns, has proposed that historians or retired judges serve as moderators, because they’re not invested in selling conflict-driven news. We could add to that list public policy scholars, political scientists and activists working in nonprofits focused on the environment, healthcare, women’s rights, racial justice and other important issues. Personally, I think smart high school and college students would be great questioners, as so many of today’s pressing issues powerfully affect their futures.

Another of Jamieson’s proposals is to get rid of the live audience—remember, there was none in the Nixon-Kennedy debate—eliminating their laughter, applause, booing and other reactions, which can stoke candidate grandstanding. The Annenberg Public Policy Center has found that studio audience responses cue the home audience reactions and can affect the public’s assessments of candidates.

Yet another proposal, though intended for general election debates, could improve primary debates as well. Intelligence Squared U.S., a nonpartisan group that sponsors debates on pressing issues, advocates for the Oxford style of debate in which a series of motions is put forward—for example, that the United States should transition to a single-payer, Medicare-for-all health system—and then each candidate argues for or against it with limited moderator interruption. Then there is time for rebuttal, a closing statement and on to the next motion. And if anyone talks out of turn—why not just cut the mic?

Broadcast and cable TV do have an obligation to air these debates. But with their profit-driven dedication to sensationalist entertainment values, they are the last ones who should be framing or moderating what we need to learn from and about the candidates, especially at this time of national peril.