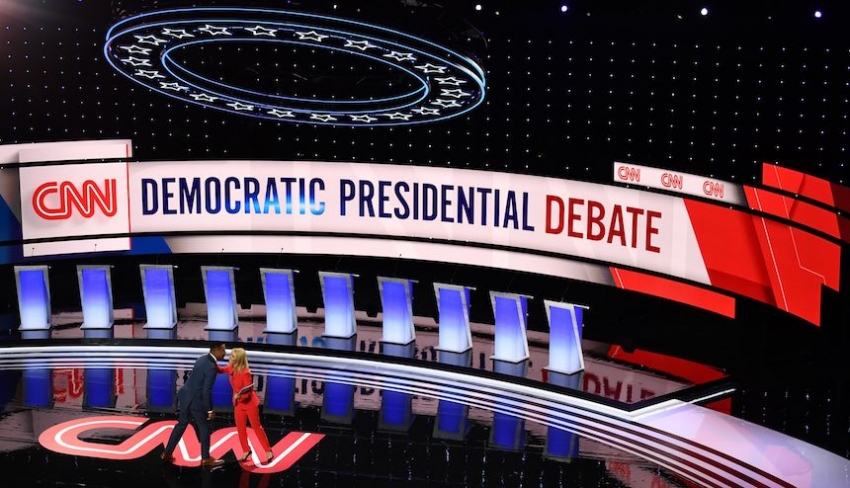 We should also have single-issue debates on healthcare, gun control, women’s rights and more

We shouldn’t be surprised that our presidential debates seem aimed less at informing the public than at boosting network ratings and keeping the world safe from so-called radical ideas, given that the parties and major networks dictate the terms—the format, the questions, the audience, who’s in and who’s out. And all are drenched in corporate dollars. The Democratic Party, reliant on big-money donors, has little interest in bolstering the left-wing policies of progressive candidates. And the networks rely on advertisers; as Sen. Bernie Sanders (Vt.) pointed out in the second debate, the healthcare industry ran advertisements during commercial breaks. The millionaire cable news hosts—as much as they might protest that they’re nobody’s puppet—know which questions will please their corporate owners and sponsors and which won’t.

Analyses I did for Fairness and Accuracy in Reporting show that the policy questions both NBC and CNN asked, especially on healthcare and the economy, leaned heavily on industry talking points and assumptions. For instance, NBC mentioned “free college” in four questions, but focused entirely on whether the program would cost too much or be “actually achievable” rather than, say, the problem of student debt or socioeconomic disparities in access to higher education.

Other models are available. The League of Women Voters used to sponsor general election debates, and typically tapped more sober print journalists, who lack the same pressure to generate ratings, to lead the questioning. But the Republican and Democratic parties effectively muscled out the League in 1988, forming the supposedly nonpartisan (but actually bipartisan) Commission on Presidential Debates, which demanded full control over choosing questioners, the audience, press access and more. The League minced no words upon its withdrawal:

The demands of the two campaign organizations [the DNC and RNC] would perpetrate a fraud on the American voter. … It has become clear to us that the candidates’ organizations aim to add debates to their list of campaign-trail charades devoid of substance, spontaneity and answers to tough questions. … The League has no intention of becoming an accessory to the hoodwinking of the American public.

In the primaries, the parties and their media accomplices try to winnow the field as quickly as possible. This year, Democratic candidates are already being knocked out of the debates for low polling numbers or fundraising dollars—nearly five months before the Iowa caucuses. But early on, most candidates are largely unknown and expected to have low poll numbers; the whole point of the early primary debates ought to be to help people get to know the candidates and their ideas.

Which brings us to the next problem. With 30-and 60-second time limits, what can we expect beyond glossy talking points? Take the climate crisis. In the first debate, Sen. Kamala Harris (Calif.) was asked to explain, in 60 seconds, her plan for climate change. Gov. Jay Inslee (Wash.), the candidate with the most developed plan thus far, has around 200 pages outlining his proposals. Though Inslee has since dropped out, Bernie Sanders released in August a 13,000-word climate plan, and several of Warren’s famous plans tackle different aspects of the crisis. Sixty seconds is absurd and insulting.

Those in control might argue that we can’t have it both ways, keeping an expansive field of candidates and giving them all adequate time to discuss those complicated issues. But there is an obvious—and easy—solution. Environmental activists, led by the Sunrise Movement, have been calling for a single-issue climate debate, but the DNC under Tom Perez voted down a proposed climate debate in August. In 2015, the Black Lives Matter movement called for a BLM-themed debate, which the DNC likewise rebuffed. We should also have single-issue debates on healthcare, gun control, women’s rights and more.

CNN recently agreed to host a town hall on climate, and NBC will be hosting a multi-day climate forum, but it’s not enough. Town halls and forums don’t get the same audience that debates get, though they will give Perez a way to claim the DNC is doing enough on climate—even while we suffer debates like the one July 30, in which the CNN hosts asked more non-policy questions (e.g., are the candidates “moving too far to the left”?) than climate questions.

What it comes down to is this: We’ll never get thoughtful, substantive policy discussions while the debates are controlled by organizations dependent on big money. We need to give the debates to the League of Women Voters or to another independent organization dedicated to democracy rather than dollars.

Julie Hollar is the senior analyst for Fairness and Accuracy in Reporting’s Election Focus 2020 project.