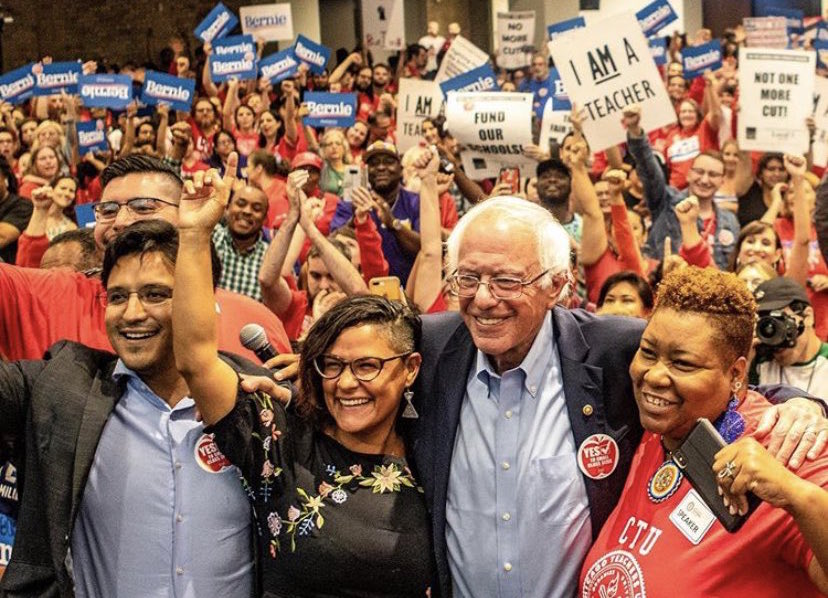 “I think that the Chicago school board should be very nervous,” said Bernie Sanders on Tuesday night. (Photo via Ari Rabin-Havt / Bernie Sanders 2020)

At a raucous rally on Tuesday, Sanders stood with Chicago teachers who are on the verge of another citywide strike.

To Sanders, an invigorated movement of the working class is the only way to achieve the type of bold redistributive policies that are central to his campaign.

When Chicago teachers led a historic strike in 2012, they boasted the critical backing of the public—but high-profile political allies were hard to come by. With then-Mayor Rahm Emanuel as the teachers’ nemesis, national Democrats stayed far away from the fight, and even a number of so-called “progressive” city council members opposed the walkout, including the now-disgraced former 1st Ward Alderman Proco ‘Joe’ Moreno who referred to the strike as “selfish.”

On Tuesday night, a very different scene was on display inside the headquarters of the Chicago Teachers Union (CTU). Sen. Bernie Sanders (I-Vt.)—one of the leading contenders for the Democratic nomination in 2020—headlined a raucous rally to support the teachers in their ongoing contract fight with new Mayor Lori Lightfoot’s administration. Sanders was flanked by union leaders, community activists and a number of the city’s newly-elected democratic socialist aldermen, all of whom pledged to back the teachers. As Sanders stated as he took the stage, “I think that the Chicago school board should be very nervous.”

The Chicago visit marked a continuation of Sanders’ unique approach to his second presidential campaign, in which he’s not just supported labor battles, but positioned them front and center—manifestations of the political revolution he aims to foment. He has utilized his vast email and phone lists to turn supporters out to picket lines, and directly targeted bosses such as Amazon’s Jeff Bezos in order to raise workers’ wages. He has joined rallies of striking workers—as he plans to do Wednesday in Detroit to back the UAW’s ongoing strike. And, fundamentally, he has used his campaign as a vehicle to propel the revitalization of a militant U.S. labor movement.

But these aren’t acts of beneficence. To Sanders, an invigorated movement of the working class is the only way to achieve the type of bold redistributive policies that are central to his campaign, from Medicare for All to the cancellation of all student debt.

As Sanders stated at the teachers’ rally Tuesday, “For the last 45 years there has been a war in this country by the corporate elite against the working class of our nation.” And, he continued, “the only way to win prosperity for working people is when we significantly increase membership in trade unions all across America.”

Tuesday marked the first day of voting among CTU members on whether to authorize a strike, which could begin as soon as October 7. The union, which claims over 25,000 members, must reach a threshold of 75% of ‘yes’ votes to ratify a walkout. If recent history is any indication, that won’t be a herculean task. Ahead of the 2012 strike, nearly 90% of all CTU members who cast a ballot voted to walk out. In 2016, the figure was even higher—close to 96%—though that action was ultimately narrowly avoided.

Contract negotiations have reached an impasse over demands by teachers for more wraparound services and classroom resources at city schools. The union claims that there remain far too few librarians, social workers, counselors, nurses and paraprofessionals to adequately staff the district’s 514 schools, and that the Lightfoot administration is refusing to address these shortages in firm contract language. Teachers are also calling for smaller class sizes, investments in special education, and support for undocumented students through a “sanctuary school” program.

“This is about way more than just pay,” said CTU President Jesse Sharkey to the boisterous crowd of teachers and supporters Tuesday night. “It’s about dignity, and the fact that our schools suffer from critical staffing shortages…It’s about the schools that Chicago’s children deserve.”

The rally also featured teachers giving first-hand testimonials of why they are voting to authorize a strike. Jamie Schnall, an educator at Beulah Shoesmith Elementary on Chicago’s South Side, echoed Sharkey’s claims, saying: “Large class sizes aren’t just in my kindergarten classes, it’s the entire building. They take more time to plan, to incorporate into lessons, and more time to get individualized attention. We need class size limits.”

And Adlai E. Stevenson Elementary teacher Norma Noriega highlighted the need for strong contract language guaranteeing safety for undocumented youth. “Our students are terrified of ICE,” she said. “We’re demanding sanctuary for all of our students. We fight for sanctuary because our students deserve to feel—and be—safe in their schools.”

“Everybody is going on strike”

But CTU members aren’t the only school workers on the verge of striking. Tuesday’s rally was also organized alongside SEIU Local 73, a union representing more than 29,000 workers, over 7,000 of whom who work in education-related positions such as custodians, special education assistants and security guards.

Local 73 members are demanding higher pay, increased staffing and an end to privatization deals that purge their ranks—such as the city’s agreement with contractor Aramark that brought private custodians into public schools, and left them in horrendous conditions. The union’s membership has already voted overwhelmingly to go out on strike, which could begin as soon as next month—potentially coinciding with that of the CTU.

Already in Chicago, thousands of nurses have gone out on strike in the past week at the University of Chicago Medical Center. On Monday, teachers at Passages charter school, who are members of the CTU, voted unanimously to authorize a walkout. And Chicago Park District employees announced at Tuesday’s rally that more than 94% of their members have voted to strike.

These actions come on the heels of recent strikes by Chicago hotel workers and orchestra musicians, as well as the first charter schools strikes in the country. Taken together, these displays of collective and concerted worker action represent a new approach for the city’s labor movement, moving into offense after years of being on its heels.

Jeanette Taylor, newly-elected alderwoman of the 20th Ward, summed up the newfound state of affairs at Tuesday’s rally, saying: “Everybody is going on strike in this city, and this is the right thing to do. We’re at a time in our lives when we can’t be silent anymore…we’ve got to stand and fight for each other.”

During his speech, Sen. Sanders urged the Chicago school board to “Sign a contract that deals with the desperate shortage of school nurses, of social workers, of librarians and of other critical staff that keep our schools going.”

“When we talk about valuing work, it’s not the hedge fund managers on Wall Street that we should value,” he continued. “It’s the teachers of this country, it’s the staffing, it’s the school nurses and the librarians.”

Supporting unions from the campaign trail

This isn’t the first time Sanders has used his 2020 campaign to lend support to Chicago workers in the midst of a labor dispute. In June, the campaign used its contact lists to call on supporters to join graduate student workers at the University of Chicago on their picket line. The campaign had previously done similar outreach to support striking workers at McDonald’s, University of Pittsburgh Medical Center, and Mercy Health-St. Vincent Medical Center in Toledo, Ohio. This mobilization, conducted through texts and emails, stands as an apparent first in modern presidential politics.

Directly pressuring employers to raise wages has been another strategy employed by Sanders’ campaign. The senator’s “Stop BEZOS Act,” introduced last fall, aimed to rein in corporate welfare and force large companies like Amazon to pay their workers a living wage. Weeks after the legislation was released, Bezos—the richest man in the world and a longtime target of Sanders’—raised his employees’ starting wages across the board to $15 an hour.

In each of these instances, Sanders did not single-handedly advocate for workers’ rights—he followed the lead of grassroots movements that were already putting forward bold demands. Whether it was grad student union members or the Fight for $15 movement, Sanders merely lent his support and voice to the labor struggles already underway. And the victories, such as Amazon’s wage raise, were made possible by organizers and rank-and-file activists—not simply a presidential candidate. Still, this type of overt worker solidarity has become a trademark of Sanders’ 2020 run.

The appearance in Chicago came the same day Sanders rolled out his wealth tax proposal, which would hit the top 0.1% of households and raise up to $4.35 trillion over the next ten years. Sanders has said that this money could be directed toward early childhood education, his ambitious housing plan and funding a Medicare for All system. Under the proposal, Jeff Bezos would be forced to pay $9 billion a year in taxes. As Sanders told the New York Times of his plan to target the super-rich, “I don’t think billionaires should exist.”

Seven years ago, Chicago teachers were able to emerge victorious in their strike even without help from the mainstream political class—locally or nationally. But today, following a wave of teacher strikes across the country which has shifted the political terrain decidedly in the direction of rebelling workers, and with all of the top Democratic candidates and an array of left-wing city council members in its corner, the CTU is poised to carry forward what the union initiated in 2012.

As Sanders said Tuesday night of the newfound labor insurgency, “What we are seeing is teachers standing up and fighting for justice.”