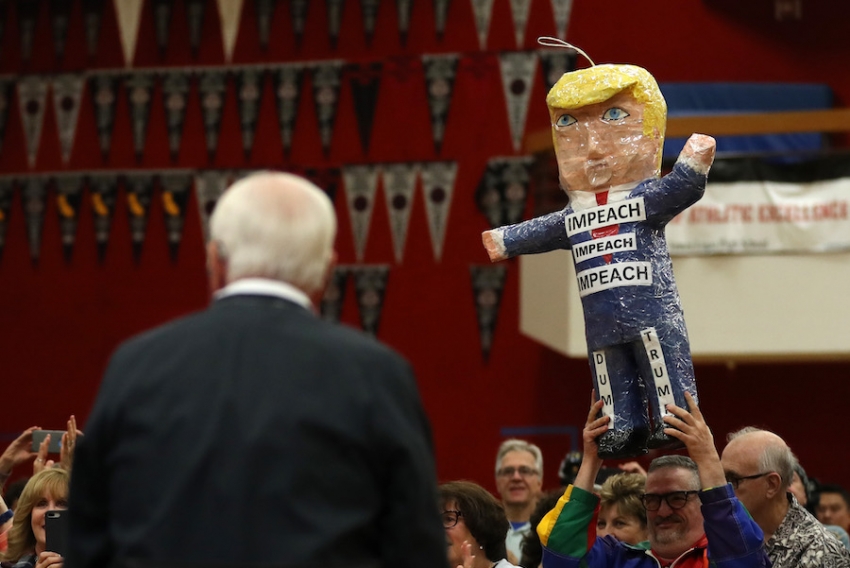 The fight for democracy can’t be left to the centrists.

Democracy is not merely an identifier or assertion of bona fides for socialists. It is an operational requirement, both to attain power and to employ it.

If you’re trying to build a mass political organization while ignoring the political issue everybody in the country is talking about, you’re doing it wrong.

Why in the world not impeach Donald Trump? You’re a socialist and you don’t want to see him impeached? Really? Back in April—admittedly, before the latest Biden-Ukraine revelations—my friend Bhaskar Sunkara, editor of the socialist magazine Jacobin, made the case against impeachment. He acknowledged that Trump is reprehensible in the extreme, yet dismissed impeachment as “squandering a historic opening to advocate for social reforms in exchange for some political theater.”

I disagree. This career draft dodger, tax evader, adulterer, debt-defaulter, chiseler, four-flusher and all-around gonif —Donald Trump, our fucking president—is the poster boy for everything we despise. And the entire Republican Party has stood foursquare behind him from the beginning.

Impeachment formalizes and emphasizes that the current administration and all its works—its legislation, its deregulation, its judicial appointments—are fundamentally illegitimate. Impeachment does not only challenge current authority; it challenges its genesis.

A distinction between the current priorities of the Left—Medicare For All, the Green New Deal, etc.—and impeachment is illogical. For the foreseeable future, if not indefinitely, democratic socialists will have to work within the framework of the U.S. state. For this to be feasible, the State’s democratic processes need to be preserved, if not strengthened. We need to attack the legitimacy of the administration in order to defend our increasingly embattled democratic institutions. We need democracy to pursue all our priorities in social reform.

Democracy is not merely an identifier or assertion of bona fides for socialists. It is an operational requirement, both to attain power and to employ it.

Impeachment is not a substitute for a social justice agenda, or a positive electoral outcome in 2020. It is a facilitator. Immediately, it preoccupies the Trump administration and limits the damage it would do on other fronts. It dramatizes a wealth of detail on the administration’s malfeasance. It strengthens the case for whoever opposes Trump, against any Republicans who support him, and against any Democrats who fail to prosecute the case against him energetically.

There is a risk that the impeachment proceedings will be narrow and legalistic, and even worse, that they will feature neoconservative attacks on Trump for failing to support Ukraine against Russia. As with every other issue, the debate within the Democratic caucus in Congress on how to do impeachment will be ideological.

It is up to the Left to promote a progressive frame for impeachment. The chief prospective victim in the Ukraine affair was not Ukraine—it was our own democracy. The degradation of our democratic institutions, from voter suppression to gerrymandering to the stonewalling of Merrick Garland, is the source of Republicans’ current political advantage and prevents urgent reforms supported by strong majorities of the public.

A leading objection offered by Sunkara and others is that “no one thinks that this can happen given the current composition of Congress.” Everyone is aware that there are not enough Republican votes in the Senate to remove Trump from office. But the politics of impeachment lie more in the process than in the conclusion. And incidentally, if there is no chance of a Senate vote to remove Trump, there is nothing to fear in a President Pence. In any case, one useful way to broaden the impeachment inquiry is to rope Pence into it, not to mention the Secretary of State and the Attorney General. Trump has been helpful in this regard, in effect threatening to take his cronies down with him. This is a good thing!

In April, Sunkara dismissed the prospect of impeachment hearings as “theater,” but politics substantially is theater. Picket lines and marches are theater. There is bad theater, and there is constructive theater. Impeachment can be constructive. Sunkara imagined the hearings will be boring. Tastes may differ on this, but watching guilty miscreants—and rest assured, they are all guilty—be abused by Members of Congress could prove to be very entertaining. For Members with a killer instinct, impeachment can be blood sport. Must-see TV.

Impeachment is a political weapon. The meticulous elaboration of charges and evidence in a due-process setting is the education that the country needs. Knowing something in general is never as compelling as learning all the gory details. If you think such a process would fall on deaf ears, you have to think there is no good case to make against Trump—a strange conclusion for any reader of In These Times.

Another reservation on the Left is that impeachment lets Democrats off the hook for their numerous deficiencies. Professor Samuel Moyn would like the Left to use impeachment to indict both parties, as well as their roles in the growth of the “imperial presidency,” a growth which certainly raises the likelihood of misbegotten military adventurism. But such a posture would surely render the Left irrelevant to this debate, which is grounded in partisan party conflict.

As noted at the outset, when the nation’s attention is focused on a thing, it does little good to say you really should be listening to me talk about something entirely different. A failure of the Left to take up impeachment leaves the field to lowest-common-denominator neocon/neoliberal politics, with which after all we are competing. Every presidential candidate with a lick of sense understands they can’t let the likes of Joe Biden monopolize the anti-Trump franchise.

The root of the case against Trump is the struggle for democracy. As Leigh Phillips and Michal Rozworski say in The People’s Republic of Walmart, “Democracy is the beating heart of socialism.” Democratic socialists must become serious about democracy: It should be more than merely a means of distinguishing ourselves from some other dudes.

In political competition with craven Republicans and assorted weak-kneed Democrats, democracy is our super-power.

Max B. Sawicky is an economist and writer based in Virginia. He previously worked for 18 years at the Economic Policy Institute in Washington, D.C.