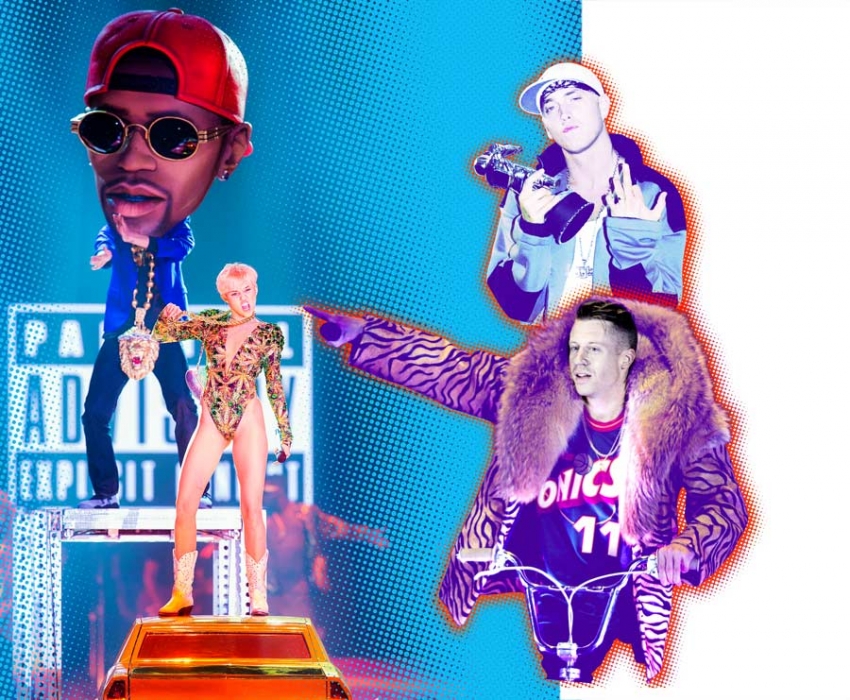 Clockwise from left: Miley Cyrus performs on her 2014 Bangerz Tour with a “bobblehead” of writing partner Big Sean; rapper Eminem holds his 2000 Video Music Award for video of the year; anti-hip-hop rapper Macklemore performs at the 2013 Sasquatch festival.

When We Talk About Cultural Appropriation, We Should Be Talking About Power

When the powerful appropriate from the oppressed, inequality is exacerbated.

White people are not penalized for flaunting black culture—they are rewarded for doing so, financially, artistically, socially and intellectually.

The word “appropriation” gets a bad rap. Centuries old, it denotes an act of transport—some item or motif or a bit of property changing hands. An artist might appropriate an ancient symbol in a painting or a government might appropriate monies through taxes to fund public education. Taking only the root of the word, the meaning seems clear. To make something appropriate for another context. In some circles, the word is still used this way. But colloquially? Not so much.

The debate over cultural appropriation rages on. It was not too many years ago that former Disney star Miley Cyrus, suited in unicorn pajamas, rattled her waist in an online video that went viral, prompting America to find language and meaning for what exactly was happening, the language with which to encounter this white girl who so loved black dance.

I recall a similar anxiety emanating from the pop music takeover of Eminem. At the 2000 MTV Video Music Awards (VMAs), the rapper, sporting close-cut bleached-blond hair, entered the theater in a white “wifebeater” (offensive, if not inaccurate) and loose gray sweatpants, trailed by dozens of white close-cut bleached-blond lookalikes. At the time, Eminem appeared to be the portent of hip-hop’s future—artists, critics and other protectors of the genre worried about the next coming of Elvis, worried that Eminem might catalyze a transformation of rap similar to what long ago happened to rock ‘n’ roll, and to jazz before that. They weren’t so wrong. Thirteen years later, the VMA for Best Hip-Hop Video was awarded to a white anti-hip-hop rap duo from Seattle named Macklemore and Ryan Lewis. Those same 2013 VMAs invited Robin Thicke and Miley Cyrus to jerk and jive to the riff of a song that would later incur payment of court-ordered royalties to Marvin Gaye’s estate for borrowing without permission.

From Halloween costumes to Cinco de Mayo parties to the Washington Redskins to decorative bindis and other music festival fashion, an avowedly more conscious generation of people is tasked with taking seriously all kinds of cultural masquerade. Yet the more popular—and accusatory—the word “appropriation” has become, the fewer people seem willing to understand the meaning behind it. Where it briefly seemed obvious that dressing up as a person of another race to the point of stereotype is not okay, as I write this, the country is in the midst of forgiving and actively forgetting the surfaced photograph of a state governor costumed in either blackface or Klan robes. (The governor refuses to disclose which partygoer in the photo he is.) After years of being chastised for wearing sombreros and Native-like headdresses, white people feel indignant. They are paranoid that people of color see appropriation in everything.

Appropriation is everywhere, and is also inevitable. So long as peoples interact with other peoples, by choice or by force, cultures will intersect and mingle and graft onto each other. We call hip-hop a black thing and it is, indeed, a black thing, that also emerged in neighborhoods where black and brown people homegrown and from the South, from the islands, melded together to produce the music of their experiences in shared poverty and community. Early rap was itself an appropriation of another generation’s sound— funk, soul, disco—repurposed for something different and new. The idea that any artistic or cultural practice is closed off to outsiders at any point in time is ridiculous, especially in the age of the internet.

Most everyday acts of appropriation, done unconsciously, escape our notice: the word that works itself into your speech because your best friend sprinkles every other phrase with it and where they got it from they don’t even know; the yoga pose you sink into after a workout; the way you shimmy when your favorite song comes on. Said the eminent cultural theorist Homi K. Bhabha, “We can never quite control these acts and their signification. They exceed intention.”

So, if appropriation is everywhere and everyone appropriates all the time, why does any of this matter?

The answer, in a word: power.

Leading discussions about appropriation have been limited to debates about freedom and choice, when everyone should be talking about power. The act of cultural transport is not in itself an ethical dilemma. Appropriation can often be a means of social and political repair. Examples include cakewalking on the old plantation, poetic verse mastered and improved upon by the descendants of those beaten or worse for the crime of literacy. Ask any book of poems by Paul Laurence Dunbar or Gwendolyn Brooks or Terrance Hayes how insurgently wonderful literature can be when black poets experiment with the forms at their disposal, even the ones that come from Europe. When the oppressed appropriate from the powerful, it can be very special indeed.

When the powerful appropriate from the oppressed, society’s imbalances are exacerbated and inequalities prolonged. In America, white people hoard power like Hungry Hungry Hippos. In the history of problematic appropriation in America, we could start with the land and crops commandeered from Native peoples along with the mass expropriation of the labor of the enslaved. The tradition lives on. The things black people make with their hands and minds, for pay and for the hell of it, are exploited by companies and individuals who offer next to nothing in return. White people are not penalized for flaunting black culture—they are rewarded for doing so, financially, artistically, socially and intellectually. For a white person, seeing, citing and compensating black people, however, has no such reward.

Take, for example, the 2014 Whitney Biennial. Since 1932, the exalted Whitney Museum of American Art in Manhattan has hosted exhibitions boasting whom it considers the most cutting-edge artists on offer. The Biennial is a shortcut to the heart of the art world and therefore to the art world’s race problem. In 2014, the museum promised a show that would “suggest the profoundly diverse and hybrid cultural identity of America today.” What its curators, Stuart Comer, Anthony Elms, and Michelle Grabner— all white—failed to mention was the scarcity of artists of color with work on display.

The exhibition included paintings by a so-called Donelle Woolford. Donelle Woolford is not the name of an artist, nor even of a real person, but the comic avatar of artist Joe Scanlan. Scanlan, a professor of visual arts at Princeton, is a white man. Donelle Woolford is a black woman—sort of. She is a deceit. Her black womanhood relies on how much credence one lends to a name that denotes a concept. Her name was “appropriated,” in his own words, “from a professional football player I admired” (a former Chicago Bears cornerback, Donnelle—two n’s—Woolford).

Included this way, Donelle was one of nine black artists out of 103 artists in total, or 11% of the black artists chosen for the Biennial. “Joe was the very first artist I asked to visit when I started on my studio-visit process for the W.B.,” Grabner told Observer in advance of the show. “I invited both Joe and Donelle. Joe turned my invitation down, but Donelle agreed to participate.”

Out of all the identities in the world, Scanlan chose a black woman, a person who, if real, would be as discounted by the world as he himself is overvalued. Head and shoulders above artists who happen to be black women, who struggle for a fraction of recognition from sentinels of the art world who look like him, Scanlan crouched down and plucked from them what he sees as their only worthwhile feature. Not their history, not their culture, not their community. Scanlan played identity politics and won.

The disparity in power between white and black in America is severe. According to a 2018 report by the Samuel DuBois Cook Center on Social Equity at Duke University, “A white household living near the poverty line typically has about $18,000 in wealth, while black households in similar economic straits typically have a median wealth near zero. This means that many black families have a negative net worth” (emphasis in original). Contrary to myths that say if only black folks did right—saved money, went to college, got married, started a business—nothing is as predictive of success in America as being born white. In fact, as the report concludes, “There are no actions that black Americans can take unilaterally that will have much of an effect on reducing the racial wealth gap.”

The enormity of this wealth gap is exacerbated by the gap between who is allowed to thrive off intellectual property and who is prevented from doing so by this nation’s hysterical, driving compulsion to own and regulate all things black. When it’s time to pay the piper, however—that is, give credit where it’s due—somehow the accolades land in the lap of somebody white, or at least someone who is not black. The contradiction is what’s meant by the adage made famous by Paul Mooney: “Everybody wanna be a nigga, but don’t nobody wanna be a nigga,” an ambivalent turn of phrase. Everybody wants the insurgence of blackness with the wealth of whiteness. Everybody wants to be cool without fearing for their lives. They want blackness only as a suggestion, want to remain nonblack, keep centuries of subjection and violence at bay. When culture is embraced and its people discarded, it’s too easy to trick the country into believing somebody white started it all.

To those who been knew, may you revel in the wonder of what people like us have made out of this dull, dull world.

White Negroes: When Cornrows Were in Vogue… And Other Thoughts on Cultural Appropriation by Lauren Michele Jackson (Beacon Press, 2019). Reprinted with permission from Beacon Press.

Lauren Michele Jackson teaches in the departments of English and African American studies at Northwestern University. She is the author of the forthcoming book White Negroes: When Cornrows Were in Vogue ... and Other Thoughts on Cultural Appropriation.