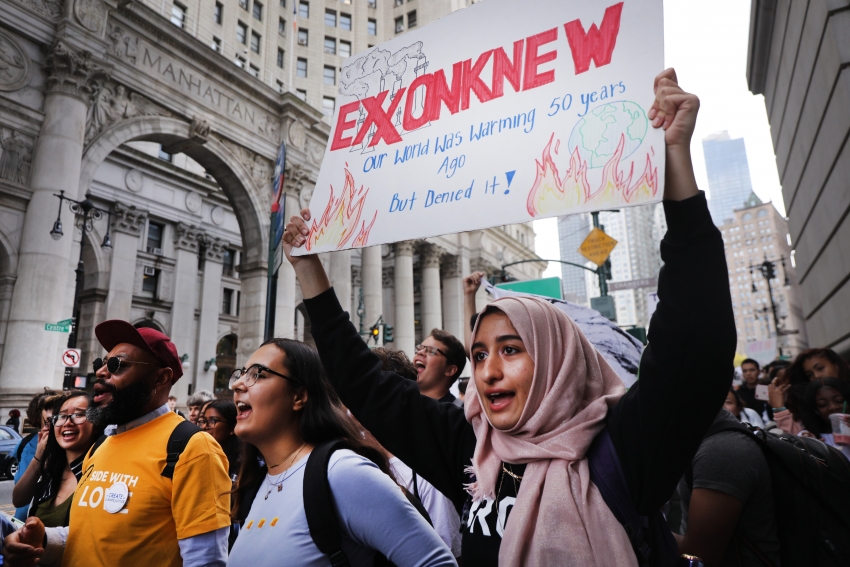 Climate Change-Fighting Youth Need Adult Allies. Their Teachers Should Be First in Line.

A striking Chicago teacher explains how educators can add climate to their curriculum—and stand with their students.

With mere years left before it’s too late, the time is now for teachers to follow their students’ lead and help carry their message into the classrooms, the streets and the halls of power.

On September 20, millions of young people staged a worldwide strike to demand government action on climate change. The New York Times reported, “Rarely, if ever, has the modern world witnessed a youth movement so large and wide, spanning across societies rich and poor, tied together by a common if inchoate sense of rage.”

Something unprecedented is happening among the world’s young people. The youth-led climate movement successfully ramped up the pressure on political leaders at the UN Climate Action Summit on September 23, and it only continues to grow. But young people can’t do it alone. They need adult allies, and their teachers should be the first to join them. After all, teachers have gone through a similar experience finding their voice through a wave of strikes for public education that have rocked the country—including my union, the Chicago Teachers Union, that currently has over 25,000 workers on the picket line.

Teachers are the people who are supposed to be educating our children about the dangers of climate change. With mere years left before it’s too late, the time is now for teachers to follow their students’ lead and help carry their message into the classrooms, the streets and the halls of power.

Energy behind the climate movement surged as a result of a young girl from Sweden named Greta Thunberg, who decided to take dramatic action for climate justice. She describes in her TED talk that after learning about the climate crisis at the age of 8, she fell into a deep depression and refused to eat, talk or go to school. She couldn’t understand how nothing was being done to solve this horrific problem. Instead of solutions big enough to address the problem, she only heard the common refrain: reduce, reuse, recycle.

At that time, Thunberg was diagnosed with Asperger’s Syndrome, obsessive-compulsive disorder, and selective mutism. Nevertheless, in August of 2018, at age 15, Greta began protesting outside the Swedish Parliament. By November of that year, her School Strike for Climate had spread to 112 countries involving an estimated 1.4 million people.  Since then, the movement has only continued to grow, with the most recent strike in September ballooning to an estimated 4 million participants.

Part of Thunberg’s appeal is that she fearlessly speaks truth to power. In one of her speeches ahead of the recent UN Climate Action Summit, she patiently explained that if we continue our current level of CO2 emissions, we will likely reach a tipping point by 2030, making it impossible to undo a climate catastrophe. Most of us have heard about what this catastrophe will look like: devastating flooding, hurricanes, droughts and wildfires that will lead to mass-extinctions, wide-spread crop failure, famine, millions of climate refugees and unanticipated military conflicts around the world.

Of course, many of these climate impacts are already beginning to take shape. That’s when many of us fall into despair and get stuck. What can we do to counter a problem so immense? For Thunberg and millions of young people, there is no other choice but to join together to demand government solutions on the scale necessary to solve the problem. That means working to pass a Green New Deal.

Our students deserve to understand what Thunberg has learned. They have the right to know what’s at stake and how they can join with others to solve this crisis before it’s too late. To people young and old around the world, Thunberg is a climate hero. But it was only once she found a way to take action that she was able to overcome her depression and transform her personal adversities into strengths in the fight that has become her calling. It is our job to teach our students about the crisis, but also what they can do about it.

Imagine a curriculum that engages students by studying the life of Greta Thunberg and other inspiring youth leaders like Isra Hirsi, the 16-year-old daughter of Rep. Ilhan Omar (D-Minn.). Hirsi is the director of US Youth Climate Strike and a leading organizer of the recent mobilizations. Students can watch the activists’ videos, analyze their speeches and grapple with the data they use. A number of texts have come out that could come in handy, including Thunberg’s book No One Is Too Small to Make a Difference and Greta’s Story: The Schoolgirl Who Went on Strike to Save the Planet, also available in Spanish.

By learning about these young activists making history, students will ask, What needs to be done to stop climate change? But also, What qualities enable them to be such effective leaders for the climate? and in Thunberg’s case, How might being differently abled actually be an extraordinary asset? These are the types of discussions that move kids from climate despair toward action for climate justice.

Here are some more ideas for how teachers can join the movement for climate justice:

Teachers have always put their heart and soul into helping nuture the next generation. That passion has led us to rise up in the hundreds of thousands across the country to improve conditions in our nation’s public schools. We’ve found that when we take to the streets and speak directly to the public with one clear voice, meaningful change is possible. This newfound power can also be leveraged for climate justice. Our future and the future of our young people depend on it.

Nick Limbeck is a bilingual fourth grade teacher in Chicago and an executive board member of the Chicago Teachers Union.