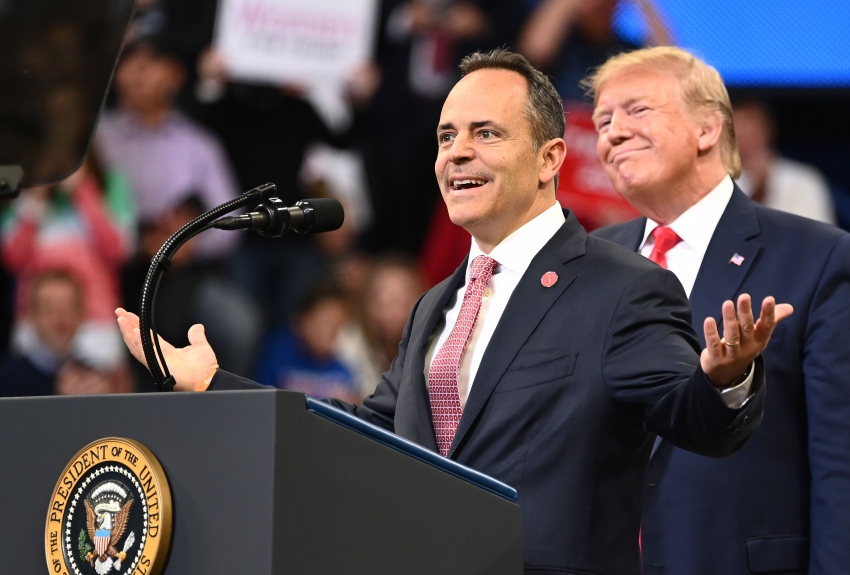 Kentucky’s election shows why you shouldn’t mess with teachers. (Photo by MANDEL NGAN/AFP via Getty Images)

Trashing Teachers and Red-Baiting: How a Republican Governor Lost in Kentucky

When Kentucky teachers staged a series of walkouts in February and March, shutting down school districts across the state, their message was clear: Stop the attacks on workers and fund public education. It had become a common refrain as a series of teachers strikes swept the country, starting with the historic statewide walkout in West Virginia last February, which soon spread to Oklahoma, Arizona, California and other states.

But Kentucky educators were up against a singularly odious adversary: Republican Gov. Matt Bevin. The least popular governor in the country, Bevin made the incendiary accusation that teachers abetted sexual assault of children through their labor action, telling local station WDRB-TV: “I guarantee you somewhere in Kentucky today a child was sexually assaulted that was left at home because there was nobody there to watch them. I guarantee you somewhere today a child was physically harmed or ingested poison because they were home alone because a single parent didn't have any money to take care of them.”

The teachers, who were protesting cuts to their pensions as well as school privatization scams, were furious. J.P. LaVertu, a Shelby County teacher, called Bevin “a disgrace to our state.” Kentucky Education Association President Stephanie Winkler said she was “appalled” by his comments. Even Republican state Sen. Max Wise said Bevin’s accusations were “reprehensible.”

And on Tuesday night, Kentucky voters showed Gov. Bevin the door. Losing a widely watched race to his Democratic opponent, Andy Beshear, Bevin proved that viscously assailing and insulting working people while throwing your arms around President Trump is a recipe for electoral disaster, even in one of the reddest states in the nation.

On Monday, Trump visited Kentucky to rally voters behind Bevin, saying, “If you lose, they're going to say Trump suffered the greatest defeat in the history of the world. This was the greatest. You can't let that happen to me!”

Despite Bevin’s refusal to concede, that defeat did indeed happen to the scandal-engulfed president. And while anger toward Trump isn’t the only reason Bevin went down in flames, turnout in some of the most progressive areas of the state soared on Tuesday, suggesting that voters fed up with a president on the verge of impeachment and a Republican Party deadset on implementing a craven anti-worker agenda fueled Beshear’s victory.

In addition to being one of the most Republican states, Kentucky is also one of the poorest. In 2017, over 17% of state residents were living in poverty (the fourth highest rate in the country) and nearly 15% faced food insecurity (the seventh highest). A report released earlier this year shows that Kentucky is the worst state to retire in.

It was under these stark conditions that Gov. Bevin in 2018 chose to implement work requirements in order for residents to receive Medicaid, which would cut the healthcare coverage of at least 95,000 Kentuckians. When a federal court blocked the plan, Bevin pivoted to unilaterally taking away Medicaid recipients' vision and dental coverage, which impacted 460,000 people.

Beshear has pledged to reverse these plans, protecting Medicaid coverage while strengthening the Affordable Care Act. On the issue of education, Beshear campaigned on “expanding early childhood education, ending a teacher shortage and increasing mental health services for children.” He also called for fully funding public education in the state while proposing a $2,000 pay raise for all of Kentucky’s public school teachers and making sure none make less than $40,000. As Beshear said, “We’re going to be the best administration for public education that this state has ever seen.”

Ahead of the election, Republicans attempted to paint Beshear and fellow Democrats as “socialists,” and Gov. Bevin claimed his opponent was “in line with Bernie Sanders” and “spreading his hateful class warfare and communist ideology.” Sanders, for his part, said in 2016, “I understand your new governor Gov. Bevin is busy cutting healthcare and cutting education. So if you can imagine the kind of governor Gov. Bevin is, think about Bernie Sanders as a president doing exactly the opposite.”

While Beshear’s politics are far more moderate than Sanders, such attacks should make clear that Republicans will try to tar any and all Democrats as radical socialists ahead of 2020, no matter their actual platforms.

The fact that Democrats won across the country on Tuesday night, retaking the Virginia state legislature while coming up big in the Philadelphia suburbs, indicates that this red-baiting is not a winning strategy—especially considering that open democratic socialists themselves had a good night.

It’s no surprise that Gov. Bevin and his fellow Republicans would use their power to strip working people of healthcare and pensions while vilifying teachers—the vanguard of the growing working-class insurgency. But just as attempts to peg Democrats as subversive threats to American democracy have failed to protect the GOP, so too will the continued attacks on public school educators.

During their walkouts earlier this year, “Remember in November” became the teachers’ rallying cry. Tuesday’s results suggest that they meant it.