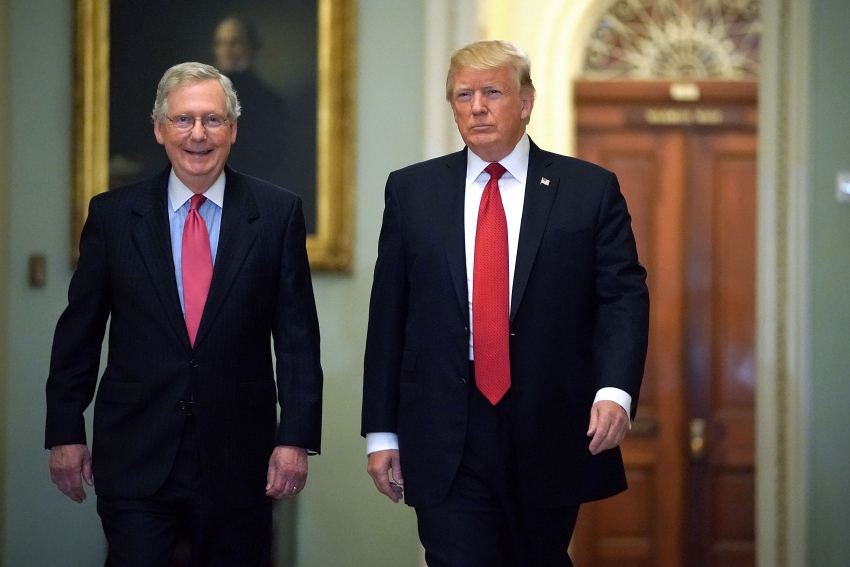 While impeachment dominates the news, the GOP is pushing through its right-wing judicial agenda. (Photo by Chip Somodevilla/Getty Images)

Imperiling progressive change “for as long as we live,” 1 in 5 federal judges is now a Trump appointee.

Progressive advocacy groups and legal experts have warned that these right-wing judges will have the power to shape U.S. law on climate, reproductive rights, and other major areas for decades to come.

Senate Majority Leader Mitch McConnell rammed through eight of President Donald Trump's lifetime judicial picks in just three days this week, accelerating the far-right court takeover that Vox's David Roberts warned is “absolutely going to hamstring efforts to make the U.S. into a responsible, civilized country, for as long as we live.”

The latest slew of confirmations, according to Bloomberg's Sahil Kapur, means that Trump and his Federalist Society allies have now hand-picked “about one in every five American federal judges,” or 170 judges total.

“Nearly all are in their 40s or 50s with lifetime appointments and positioned to shape American law for generations,” Kapur noted on Twitter. “It gets a tiny fraction of attention compared to other stuff he does but this is the Trump legacy that'll echo for generations after he's gone.”

The Republican-controlled Senate confirmed one lifetime judicial nominee Tuesday, five Wednesday, and two Thursday. The rapid confirmation of Trump nominees was made possible by McConnell's decision earlier this year to invoke the so-called “nuclear option,” which slashed debate time on judicial nominees from 30 hours to just two.

“We're appalled,” the Leadership Conference on Civil and Human Rights tweeted Thursday in response to the latest confirmations.

Progressive advocacy groups and legal experts have warned that these right-wing judges will have the power to shape U.S. law on climate, reproductive rights, and other major areas for decades to come. At a rally in Kentucky last month, McConnell bragged that he and Trump are “changing the federal courts forever.”

In addition to being overwhelmingly young and far-right, a number of Trump's judicial appointments have also received a “not qualified” rating from the American Bar Association. One such judge, Federalist Society member Sarah Pitlyk, was condemned as particularly horrifying by rights groups following her confirmation Wednesday.

“Sarah Pitlyk's confirmation to the district court in Missouri is a dream come true for the anti-choice movement and a profound danger to women and families in the state,” Ilyse Hogue, president of NARAL Pro-Choice America, said in a statement. “Putting judges like Pitlyk on the bench who will spend their lifetime appointments working to roll back reproductive freedom is further proof that Donald Trump is paying back his debts and then some to the anti-choice movement that got him elected.”

In the face of the ongoing right-wing takeover of the federal judiciary, advocacy groups are pressuring 2020 Democratic presidential candidates to explain how they would work to reform the nation's court system in order to enact progressive policy changes.

“Without a meaningful plan for court reform any presidential attempts to make needed change will simply by blocked by the courts,” said Emma Janger, co-director of the People's Parity Project, a nationwide network of progressive attorneys and law students.

As Common Dreams reported in October, advocacy group Demand Justice launched a campaign urging Democratic presidential contenders to emphasize the importance of the federal courts and tell the public how they plan to break the right's stranglehold on the judiciary.

“The GOP has hijacked our nation's courts,” said Demand Justice, “and voters need to hear plans to fight back.”

This story was first posted at Common Dreams.