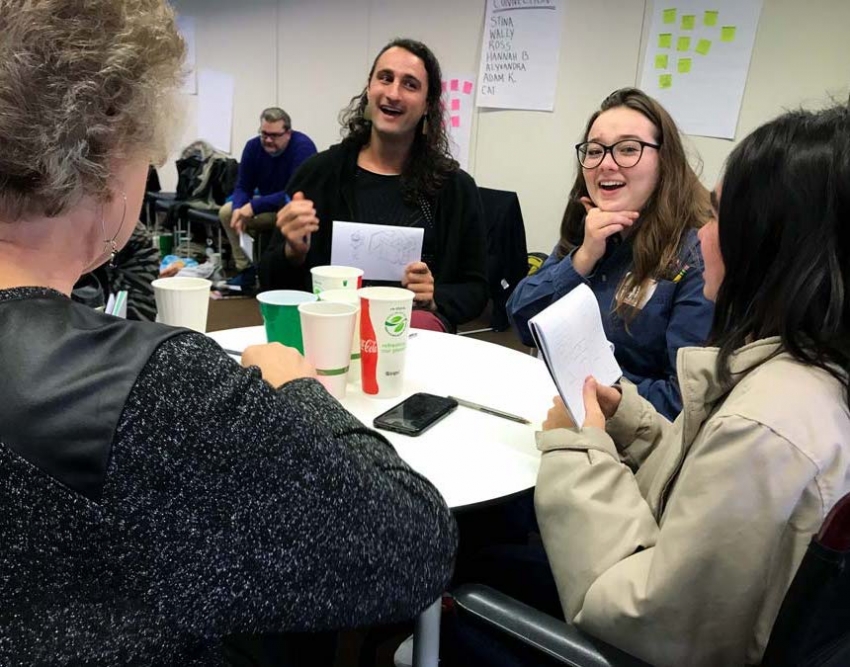 Organizers discuss their potential futures under a Green New Deal at the Central Library in Des Moines, Iowa. (Photo by Cat Rocketship)

Instead of wizards and clerics, Iowans are envisioning roles like community planners and memory stewards, in an environmentally and economically just society.

Iowans imagined new social roles in a 2030 society that has taken significant steps toward environmental and economic justice.

DES MOINES, IOWA—“Who in this room has played Dungeons & Dragons?” asks Cat Rocketship, an organizer with the progressive advocacy group Iowa Citizens for Community Improvement (CCI), of a room of more than three dozen activists. They were envisioning the future under a Green New Deal during an experimental workshop Nov. 16, 2019, at the Central Library in downtown Des Moines.

Rocketship was introducing a small-group activity, imagining new social roles in a 2030 society that has taken significant steps toward environmental and economic justice. Instead of wizards and clerics (per Dungeons & Dragons), proposed roles ranged from the familiar, like community planners, to the more creative, such as memory stewards to record and preserve stories about their communities.

The workshop was led by Alex O’Keefe, creative director of the youth-led climate organization Sunrise Movement, and members of CCI. Roughly a quarter of attendees traveled from other states to discuss a “Green New Deal for Iowa and rural America.”

“In Michigan, there is a very big divide between urban and suburban communities and rural communities,” said Maria Ibarra-Frayre, 29, deputy director of working-class organizing group We the People Michigan, who traveled from Detroit. “There is very little overlay or relationship-building between those communities.”

Participants were given notebooks (with covers fashioned from recycled posters promoting a past CCI event) to record their thoughts throughout a series of collaborative brainstorming sessions. They wrote letters to their 2009 selves amid the Great Recession, then letters to their 2030 selves imagining equitable rural communities. Ideas for the future included affordable loans for beginning farmers, more robust local food distribution markets, and guaranteed union jobs to plant prairie land, build electric rail and enhance rural internet access.

At day’s end, organizers collected the notebooks for delivery to a group of animators who will create a short video to galvanize support for a Green New Deal. It will be released in mid-January ahead of the Iowa caucuses February 3.

As a model, the workshop opened with an animated short, A Message From the Future with Alexandria Ocasio-Cortez, illustrated by Molly Crabapple, produced by The Intercept and narrated by the congresswoman. In the video, Ocasio-Cortez imagines the United States after Medicare for All (described as “the most popular social program in American history”), a federal jobs guarantee and nationwide high-speed rail, to help envision an inclusive, environmentally friendly, progressive future.

The idea appealed to Larry Ginter, a 79-year-old retired family farmer from Rhodes, a rural community of about 300 people in central Iowa where he grew up. He recounted how the New Deal revitalized his hometown.

“You couldn’t explain how great everything was,” Ginter recalled. The community thrived until the early 1950s, when commodity price floors declined as part of the dismantling of the New Deal. Where Rhodes once supported two gas stations, five churches and a public school, he said, today it has no gas stations or schools and one active church.

Ginter said he was enthused about the younger generation’s ambitious climate efforts, but apprehensive about the dystopian future they might inherit.

“My fear is that our government and a lot of people won’t buy into the idea that we need … real structural change to get things going on here” to fend off climate catastrophe, he tells In These Times. “If we don’t get a handle on this, we’re going to see things that we never dreamed of.”

Already, Iowa farmers have felt the effects of a changing climate, with record rainfall threatening crop yields and delaying the harvest season. Meanwhile, the corporate agricultural lobby, led by groups like the Iowa Farm Bureau, continues to dominate policymaking in a state where hogs outnumber humans more than sevenfold. This factory farming continues to pollute the water with cancer-causing nitrates, which ultimately flow into the Gulf of Mexico, depleting oxygen for marine life.

And with the completion in 2017 of the Dakota Access Pipeline, which cuts 343 miles across the state under extensive spans of farmland and the Missouri and Mississippi rivers, Iowans face the increased potential of crude oil leaks. That’s what inspired Dawson Davenport, 39, a member of the Meskwaki Settlement about 60 miles northeast of Des Moines, to attend the workshop. He wants to encourage others to spread climate activism across Native communities.

Workshop organizers struck a hopeful tone despite grim environmental and political realities. The contrast between a utopian and dystopian future was a recurring motif: We face both scarcity and plenty, isolation and connection, division and solidarity.

Before the workshop’s conclusion, facilitators discussed what their next steps might be, including participation in a national climate strike in December and committing to caucus in Iowa for a presidential candidate who supports the Green New Deal.

Gavin Aronsen is an editor of the Iowa Informer, and previously worked at the Ames Tribune and Mother Jones magazine.

Is Cristina Tzintzún Ramirez the Future of Texas?