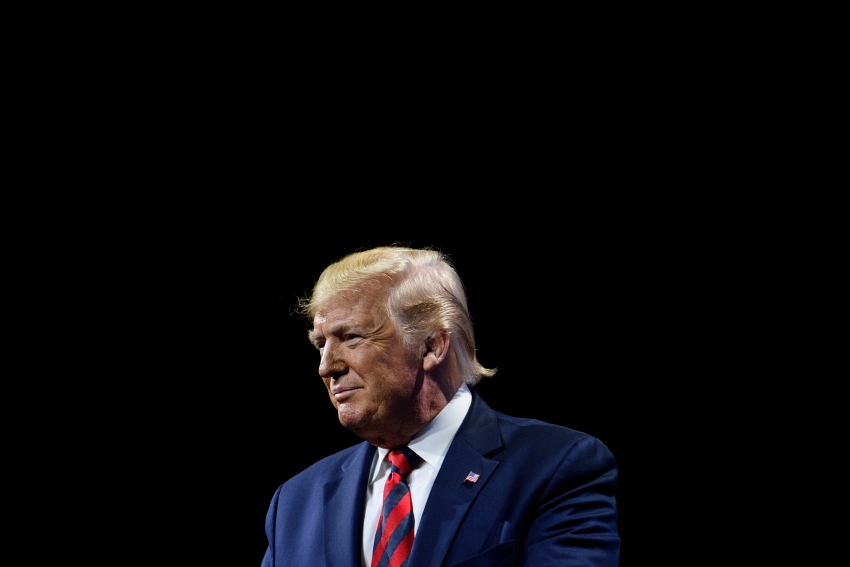 In defense of partisan impeachment. (Photo by BRENDAN SMIALOWSKI/AFP via Getty Images)

What Trump’s defenders miss: impeachment only works when it’s partisan.

The best case for impeachment is that the Constitution does not allow the will of the people to abandon the rule of the people.

Turn on the news and you’ll likely hear GOP talking heads hammering on about how the impeachment inquiry into President Trump amounts to a “partisan witch hunt.” While some of Trump’s defenders may point to bipartisan support for former President Richard Nixon’s impeachment, that critique misses an important point: impeachment only serves a real function if there is a partisan split.

Without the Republican Party behind him, Trump would likely have been incapable of committing (and covering up) high crimes and misdemeanors, or the suborning of the republic. He would be as isolated as Nixon, who, unlike Trump, had no adoring party behind him to march upon the capital. If there is no partisan conflict, there is no danger. Term limits, or elections, are the tools used to oust a president who has no party behind him. It’s only when we can’t rely on elections—or indeed, be all that sure a majority of voters will defend the republic—that we need to resort to impeachment.

The real case for impeachment is when there isn’t a bipartisan majority in Congress behind it. If impeachment is bipartisan, it’s beside the point: the republic will survive and elections or term limits will be enough to remove such a weakened president. The function of impeachment is to save the republic from a chief executive who can blow past these limits, because he has a loyal party behind him and so much of the country may well be indifferent as to whether he suborns the republic or not.

To think otherwise is to commit the error of George Washington University Law School Professor Jonathan Turley, one of the four constitutional law professors who testified before the House impeachment inquiry (and the one chosen by the GOP). Turley’s argument suggests we can only impeach a President who is willing to behave. More specifically, he argued against impeachment until there is testimony from all the “key witnesses,” namely, the palace guard of Republicans at the top of a party solidly behind Trump. It’s disingenuous to say that Republican appointees to the bench, more and more of them Trump’s own, will force these witnesses to testify. Even if these judges would enforce the subpoenas to show up, it is even more doubtful they would later override claims of executive privilege—or even get to the issue before Trump is done with a second term (should he win).

By the time the courts did enforce the testimony, if they ever did, there would be much less of a republic left to suborn. What Turley fails to grasp is that the entire Republican Party is behind Trump in flipping the bird at the Constitution and the rule of law. There is no reason Trump’s own appointees—who are all conservatives—will betray a rogue president who has the backing of his party. In effect, Turley’s argument holds that the more Trump can get away with suborning the republic, the more Congress loses the right to impeach him.

Trump is upfront with the voters: he said in 2016 that he would not accept the legitimacy of any election that he lost, promised to use his best effort to put Hillary Clinton in prison and openly called on Russian President Vladimir Putin to come to the aid of his election. And, knowing all of this, people voted for him. Given our cockeyed Electoral College system, you could argue that Trump has a “mandate” under the Constitution to suborn the Constitution. Is it proper to impeach Trump for doing what people expected him to do—namely, to subvert the election process in 2020 so that only his election can be deemed “legitimate”? And, as shown by that “perfect” call to Ukraine President Volodymyr Zelensky, the prospect of losing in 2020 has already started to concentrate his mind. He has reason to believe that he has a mandate, or at least permission, from the people to undermine the republic in just the way he said he would in the 2016 campaign.

Of course, in many other countries, Trump would not even be a legitimate president since he lost the popular vote to Clinton by three million votes. He is “legitimate” only because of the Electoral College—but not otherwise under the Constitution’s own democratic norms. That makes impeachment even more defensible, for it means the Constitution, thanks to the Electoral College, includes structural bias in favor of those most likely to overthrow it: candidates like Trump who lose the popular vote and who are therefore most threatened by democratic norms.

What is the case in a democracy for removing Trump when he campaigned to commit high crimes and misdemeanors?

Well, the best case for impeachment is that the Constitution does not allow the will of the people to abandon the rule of the people. Elected leaders must follow the law, and abide by the Constitution—even the president. If they betray their responsibility and abuse their power, these leaders must face repercussions, and elections are not enough to ensure they’re removed from office. After all, most Americans didn’t vote for Trump, not just because he lost the popular vote but also because 100 million people sat the election out—nearly half of all eligible voters. The minority that supported Trump should not protect him from facing judgment under constitutional law.

So it is with impeachment: but it is a terrible judgment on the impeachers. For the impeaching party now defending the Constitution is also culpable for getting us to this state. It was the Democratic Party that lost much of its working-class base to Trump. And it’s that loss that makes Trump as dangerous as he is. Yet Trump’s impeachment would be in the interests of these very voters—because the best hope of the working class is the defense of the republic: it is always government of, by and for the people.