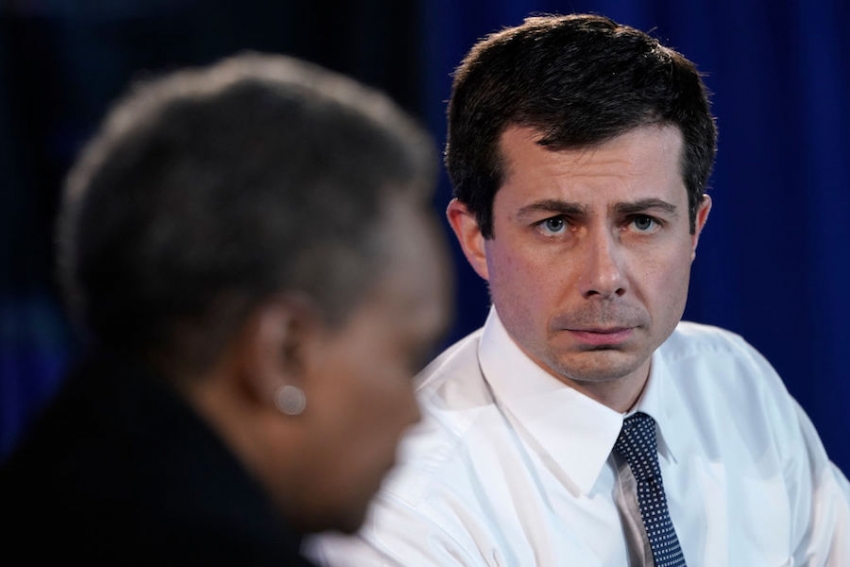 Buttigieg Is Shocked, Shocked at McKinsey’s Transgressions. But It Was Notorious When He Joined It.

McKinsey was embroiled in a nationwide scandal over helping insurance companies squeeze customers.

McKinsey cast the claims process as a “zero-sum economic game,” where “Allstate gains” and “others must lose,” as one PowerPoint slide put it.

Early in his political career, 2020 presidential candidate and South Bend Mayor Pete Buttigieg talked proudly of his years at the consulting firm McKinsey & Company—his most “intellectually informing experience,” at “a place to learn … all the things about business I didn’t know.” With Buttigieg’s rise to fourth place in the polls, however, the firm’s unsavory activities have come under increasing scrutiny—its work in the past decade with authoritarian states like Saudi Arabia and China, its immigrant detention cost-cutting advice so inhumane it shocked even ICE workers.

Under pressure for more transparency about his role at McKinsey, Buttigieg prevailed upon the firm to waive his NDA and released his client list. But the campaign has dismissed scrutiny of his clients on the basis that he was a just one cog with no decision-making power.

And in response to the firm’s recent scandals, Buttigieg has noted that he “left the firm a decade ago” and called “what certain people in that firm have decided to do…extremely frustrating and extremely disappointing.”

But McKinsey was mired in high-profile scandals prior to Buttigieg’s decision to work there after graduating from Oxford in 2007—and throughout his time there. It was implicated in the 2001 Enron scandal (among other things, one of the company’s chief executives, Jeffrey Skilling, was a former McKinsey man) and had become notorious as the brains behind countless corporate cost-cutting schemes that slashed jobs, such as the 2007 “Project X” plan, in which Chrysler closed U.S. plants and laid off thousands of factory workers.

Perhaps the most notorious of these was the sprawling insurance scandal that became known as “the McKinsey documents,” in which McKinsey revolutionized the insurance industry to maximize profits at the expense of vulnerable policyholders.

In the early 1990s, Allstate, then one of the country’s biggest auto insurers and looking to pare down how much it was spending on claims, hired McKinsey to do what McKinsey is best-known for doing: cut costs. McKinsey dutifully developed a strategy to “radically alter our whole approach to the business of claims” and boost company profits, which Allstate implemented in 1995. Internal documents released years later showed that McKinsey cast the claims process as a “zero-sum economic game,” where “Allstate gains” and “others must lose,” as one PowerPoint slide put it—the “others” being claimants who had suffered the very misfortunes and disaster their insurance was meant to cushion.

The strategy increased income thirtyfold. Revenue soared from a yearly average of $82 million in the preceding decade to an average of $2.5 billion in the decade that followed. During that time, the amount Allstate paid out per every dollar it charged customers for premiums dropped from around 69 cents to 43.5 cents. By 2007, it had hit a record profit of nearly $5 billion. The strategy was considered such a success that two years later, the program was expanded beyond auto insurance to fire, water and roof damage for homes.

Allstate’s surging profits meant hardship for its customers. Claimants who had diligently paid their premiums for years were suddenly abandoned at precisely the moment of crisis their insurance was meant for. Many received low offers that covered only a fraction of the costs. Some were treated as frauds and potential criminals. Others were tied up in court until they simply gave up on ever recouping their losses.

A host of other insurers also made use of McKinsey. Insurance giant State Farm hired McKinsey in the early 1990s; like Allstate, by 2007, its profits had doubled over 1990s levels.A 2007 analysis by the Sun Herald in Biloxi, Miss., found that between 2002 and 2005 alone, even as eight major hurricanes wreaked destruction along the coast and, particularly, in Florida, the insurance giant’s fire and casualty subsidiary saw its net worth more than double to $7.7 billion and its payouts per premium dollar drop from 70.6 percent to 51.6 percent.

By the time Hurricane Katrina struck land in August 2005, property insurers across the country were operating according to the McKinsey strategy, as the Bloomberg Markets cover story “The Insurance Hoax” later detailed. Reports abounded of insurers low-balling, underpaying, or simply flat-out refusing to fulfill Katrina-related claims. In November 2005, Louisiana Attorney General Charles Foti filed a suit accusing McKinsey and nine other defendants, including Allstate and State Farm, of “rigging the value of policyholder claims and raiding the premiums held in trust by their companies for the benefit of policyholders to cover their losses.” The state accused McKinsey of heading an insurance conspiracy.

The McKinsey-designed insurance strategy was major news through the 2000s. This was thanks to numerous lawsuits by both private attorneys and state officials like Foti, who went to war with Allstate and State Farm on behalf of consumers railroaded by the companies after not just auto collisions and fires, but natural disasters like tornadoes and hurricanes.

They were given a boost by Santa Fe lawyer David Berardinelli, who sued Allstate in 2000 for bad faith denial of an insurance claim, and temporarily obtained 12,500 pages of PowerPoint slides outlining McKinsey’s strategy. Forbidden from copying the documents, Berardinelli took copious notes and published an exposé titled From Good Hands to Boxing Gloves: The Dark Side of Insurance in 2006, the year before Buttigieg joined McKinsey.

Insurers went to extreme lengths to block other damning documents about McKinsey’s advice coming out publicly during lawsuits. Ordered to release internal documents by a Missouri court in 2007, Allstate simply refused and was held in contempt, racking up $25,000-a-day fines that ultimately totaled more than $7 million. It took an order from Florida’s insurance commissioner to finally bring the documents into the light of day, and even then Allstate initially refused, relenting in April 2008 only after Florida suspended it from selling new insurance policies in the state.

The documents made national headlines in outlets like the Chicago Tribune and CNN, which produced a February 2007 report looking at insurers' practice of low-balling claimants. Former claims agents admitted to the network they had offered as little as $50 to policyholders who had suffered bodily injury and used what employees called “the three D’s”: delay, deny and, if it comes to it, defend.

The insurer’s refusal to release the documents was understandable given what their contents revealed. Inside were McKinsey’s PowerPoint slides positing a “zero-sum game” between Allstate and its policyholders. “Leakage” was McKinsey’s term for paying policyholders more than necessary. The company’s bet was that when faced with a “take it or leave it offer,” most claimants would choose to take it, particularly in the midst of the financial insecurity in the wake of an accident. McKinsey advised Allstate that while most customers could be treated with “good hands” (as in the company’s slogan, “You’re in good hands with Allstate”) and get a quick settlement, those who refused the low-ball figures the insurer offered should get the “boxing gloves” treatment and be made to wait three years or more for a resolution.

If policyholders lawyered up, McKinsey counseled that the company “align alligators”—adopt tougher legal action—and then “sit and wait.” Clients fighting Allstate often gave up in the face of years of litigation, local trial attorney David Shapiro told the Sarasota Herald-Tribune. “There are many lawyers who won’t take an Allstate case,” he said.

“[Allstate] pay[s] less than every single insurance company, and they certainly will spend more on litigation,” one former Allstate lawyer told the paper.

McKinsey  also recommended the adoption of a computer program named Colossus to remove the discretion of claims agents in favor of “establishing a new fair market value” for bodily injuries. The program could allegedly be “tuned” to produce low-ball offers from the get-go. McKinsey instructed claims agents “to stay within the Colossus range or below it in most cases.” The program would lead to profits, McKinsey assured Allstate, and “shareholders will notice.”

The long-running scandal raises the question of why Buttigieg, as rival candidate and Hawaii Rep. Tulsi Gabbard put it, “chose to work for a company like McKinsey.” But it also raises another question: How much of the firm’s ethos—putting corporate profits over the health and economic security of the US public with a ruthless, amoral zeal—was internalized by him?

According to Buttigieg, his first client for the firm was the health insurer Blue Cross Blue Shield of Michigan. By his own account, according to the New York Times, the insurer had “had grown in such a way that there was a great deal of duplication and some people didn’t even know what the people working for them were doing.” Two years later, it laid off 10% of its workforce, froze pay for non-union workers and increased its rates.

As the Huffington Post reported, Buttigieg went on to serve as part of a team that recommended cuts to the U.S. Postal Service and the replacement of unionized postal workers with privatized staff. And as the Intercept’s Ryan Grim noted, Buttigieg would later credit his “great experience” at McKinsey with exposing him “to a lot of different ideas and ways of solving problems,” coming to view running the city of South Bend as akin to “running a corporation” and to see its 100,000 residents as “stakeholders.” Buttigieg’s technocratic style of mayordom earned him critics in South Bend, including residents, the director of a local charity for the homeless, and a city council member and now mayoral rival, who complain of top-down, data-driven policies that made life harder for the homeless and accelerated the displacement of communities.

Buttigieg, the Rhodes Scholar, is known for doing his homework. It stretches credulity that he was unaware of the massive insurance scandal engulfing the company before and throughout his years there, one that laid bare the heart of McKinsey’s business strategy: Maximize profits, no matter what the human cost.