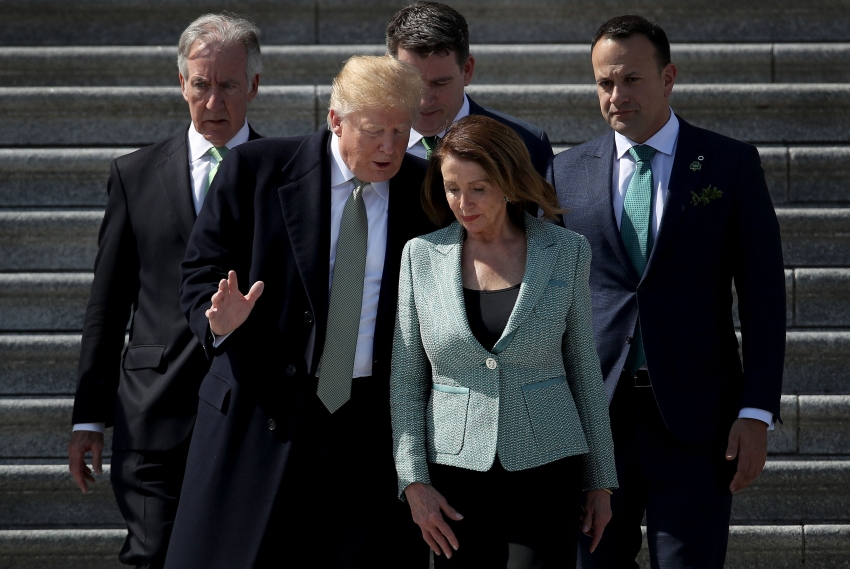 To Stop Trump’s War with Iran, We Must Also Confront the Democrats Who Laid the Groundwork

Democratic leaders are feigning outrage, but they’ve supported the precursors to war.

These failures are consistent with a troubling pattern: Democrats tee up the ball for Trump’s aggressive maneuvers, and then express outrage when his administration takes a swing.

Since President Trump took office in 2017, the leadership of the Democratic Party has overwhelmingly supported the precursors  to today’s dangerous U.S. escalation towards Iran: sanctions, proxy battles and a bloated military budget. Yet, now that we stand on the brink of a possible U.S. war of aggression, Democratic leaders are feigning concern that Trump is leading a march to  war without congressional approval, and using a faulty strategy to do so. These objections, however, are grounded in process critiques, rather than moral opposition—and belie Democrats’ role in helping lay the groundwork for the growing confrontation.

The U.S. drone assassination of Maj. Gen. Qassim Suleimani, the commander of Iran’s Quds Force and a ranking official of the Iranian government, takes confrontation with Iran to new heights, inching the U.S. closer to the war the Trump administration has been pushing for. While Trump deserves blame for driving this dangerous escalation, he did not do it on his own.

As recently as December 2019, the House overwhelmingly passed the National Defense Authorization Act (NDAA) for Fiscal Year 2020 with a vote of 377-48. Two amendments were stripped from that bill before it went to a vote: Rep. Ro Khanna’s (D-Calif.) amendment to block funding for a war with Iran barring congressional approval and Rep. Barbara Lee’s (D-Calif.) amendment to repeal 2001’s “Authorization for Use of Military Force Against Terrorists” (AUMF). That AUMF effectively allows the government to use “necessary and appropriate force” against anyone suspected of being connected to the 9/11 attacks, and has been interpreted broadly to justify U.S. aggression around the world. Officials from the Trump administration have suggested that the 2001 AUMF may give them authority to go to war with Iran.

Of the 377 Representatives who voted for the $738 billion defense bill, 188 were Democrats. Just 41 Democrats opposed the legislation. The bill cleared the Senate with a tally of 86-8, with just four Democrats voting against it. None of the Senators running for the 2020 Democratic nomination were present for the vote. Before the vote, Sen. Majority Leader Mitch McConnell (R-Ky.) took to the Senate floor to brag about the fact that “partisan demands” had effectively been removed from the bill and declared that “sanity and progress” had won out. “Reassuringly, the past few days have finally brought an end to bipartisan talks and produced a compromise NDAA,” said McConnell.

At the time of the bill’s passage, 31 organizations, including Yemeni Alliance Committee and the National Iranian American Council Action, put out a joint statement condemning the NDAA as a looming disaster destined to be abused by the Trump administration. “The NDAA is a massive blank check,” reads the statement. “The authorization of $738 billion is obscene. Further inflating the Pentagon’s overstuffed coffers does not make us safer—it perpetuates a system that treats military intervention as the solution to all world problems.” Despite these concerns, Democrats did not put up much of a fight, and the Congressional Progressive Caucus declined to whip the vote against the NDAA.

Democrats’ complicity doesn’t stop with bloated war budgets. In July 2017, Sen. Bernie Sanders (I-Vt.) was the only lawmaker in both the House and the Senate who caucuses with the Democrats to vote against a bill that bundled together sanctions on Iran, Russia and North Korea. Proponents of the bill, meanwhile, used anti-Russia rhetoric to ram it through Congress. Sen. Dianne Feinstein (D-Calif.) told the Intercept at the time, “I just looked at the sanctions, and it’s very hard, in view of what we know just happened in this last election, not to move ahead with [sanctions].”

Sanders was clear that he opposed the bill because of his opposition to sanctions on Iran, but supported sanctions against Russia and North Korea, which are also aggressive and harmful to the people of those countries. Still, he was demonized by some in the Democratic establishment. As we previously reported, Adam Parkhomenko, former Hillary Clinton aide and founder of the Ready for Hillary PAC, said on Twitter at the time, “Feel the Bern? Bernie Sanders voted against Russian sanctions today. 98 Senators voted for Russian sanctions today. Sanders voted the same way anyone with the last name Trump would vote if they were in the Senate. No excuses―stop making them for him.”

When Trump—surrounded by hawkish advisors—pulled out of the Iran nuclear deal in May of 2018, the Democratic establishment roundly criticized him, often citing the supposed threat posed by Iran, even though the country has no nuclear weapons program, according to U.S. intelligence agencies’ own assessments. “The president's willingness to shatter the international consensus, forged over years of arduous negotiations, on how to constrain Iran's nuclear program only makes sense as part of a campaign to erase his predecessor's legacy, regardless of the consequences to our national security,” Rep. Adam Schiff (D-Calif.), the ranking Democrat on the House Intelligence Committee, said at the time.

Yet, Democrats’ previous support for sanctions already violated the Iran deal, whose benefits for the Iranian people were almost entirely premised on relief from devastating sanctions. In December of 2018, high-profile Democrats, including Elizabeth Warren, called for the United States to return to the Iran nuclear deal. While such a move would certainly constitute a de-escalation, these calls were bereft of accountability for the role that Democrats played in emboldening Trump to impose even more sanctions—and ultimately walk away from the agreement.

These failures are consistent with a troubling pattern: Democrats tee up the ball for Trump’s aggressive maneuvers, and then express outrage when his administration takes a swing. The Trump administration has been on a course towards towards confrontation with Iran for three years. He’s hired notorious Iran-war fanatics Gen. James Mattis, John Bolton and Elliot Abrams. His biggest donor is anti-Iran radical billionaire Sheldon Adleson. His State Department appears to have staffed out some of its Iran policy to the pro-Israel, rightwing think tank Foundation for Defense of Democracies. He’s signaled from day one his goal was to march the United States towards war. Yet, Democrats still padded his war budgets, voted for his appointments, baited him to have a tougher stance against Iran’s most important ally, Russia, and did nothing to curb his support for anti-Iran forces in the Middle East. Democrats have, for the most part, been not only unwilling to spend their political capital trying to change this course, but have actively encouraged it through their support for proxy battles against Iran in Syria and Iraq. And we must not forget that it was President Obama who, in 2014, sent troops back to Iraq as part of the war against ISIS.

Although many Democrats were quick to criticize Trump’s deadly drone strike, most of the statements were qualified with assertions about the murderous nature of Suleimani. “No American will mourn Qassem Suleimani’s passing,” begins Joe Biden’s statement. “He deserved to be brought to justice for his crimes against American troops and thousands of innocents throughout the region. He supported terror and sowed chaos.” Initial statements from Sens. Elizabeth Warren and Amy Klobuchar began with similar declarations. The first statement that has even referred to the killing as an “assassination” has been from Bernie Sanders. Warren later followed up her initial statement with remarks that also used the language of assassination.

Some Democrats who voted for the NDAA and handed the Trump administration a blank check suddenly expressed concern about the President’s powers. “Soleimani was an enemy of the United States. That’s not a question,” tweeted Connecticut Sen. Chris Murphy (D-Ct.)—who voted or the bill. “The question is this - as reports suggest, did America just assassinate, without any congressional authorization, the second most powerful person in Iran, knowingly setting off a potential massive regional war?”

Other Democrats are also expressing concern that Trump is deploying the wrong strategy against a dangerous enemy, while accepting the premise that intervention could be justified. This approach is reflected in presidential hopeful Pete Buttigieg’s statement, released today: “Before engaging in military action that could destabilize an entire region, we must take a strategic, deliberate approach that includes consultation with Congress, our allies, and stakeholders in the Middle East.” This statement presumes that a destabilizing war of aggression could be justified, conceding Trump’s moral justifications, even as Buttigieg handwrings about the method.

We can’t stop a war with Iran unless we recognize U.S. aggression is not the product of failed strategy, or the Republican Party alone. It’s the product of a system where it’s normal bipartisan politics to lay the building blocks of war with no public account of the profound harm that is being done. And then, on the eve of said war, those Democrats who have been setting its course feign outrage and shock—if a Republican is in the White House, that is. We saw this script play out with the Iraq War, and we’re seeing it again now. In a U.S. political establishment where killing people abroad comes with little political cost, the politicians who contributed to the U.S. climate of belligerence are never forced to face the consequences. It costs nothing to to jockey for war, but everything to stand against it—including war’s precursors, such as sanctions, bloated military budgets and CIA meddling. Our only hope is to change this.

Sarah Lazare is web editor at In These Times. She comes from a background in independent journalism for publications including The Intercept, The Nation, and Tom Dispatch. She tweets at @sarahlazare Michael Arria covers labor and social movements. Follow him on Twitter: @michaelarria