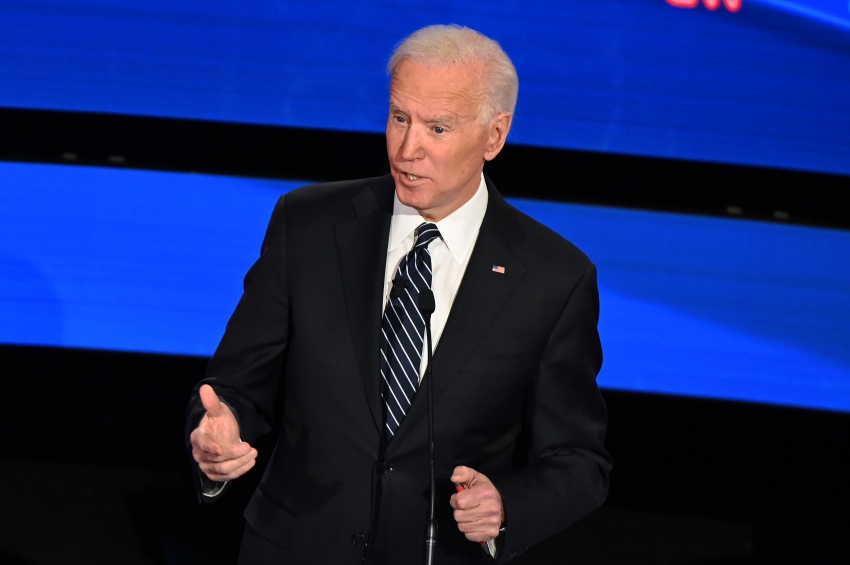 In last night's debate, Joe Biden continued to distort and lie about his record. (Photo by ROBYN BECK/AFP via Getty Images)

While Biden has promised a break from Trumpism, in Tuesday’s debate and beyond, the former vice president has shown an utter disregard for the truth.

Both in Tuesday’s debate and beyond, Biden has exhibited the same kind of disregard for the truth as Trump.

One running theme of the bipartisan outrage at Donald Trump and his administration has been the constant stream of falsehoods emanating from the White House since he took office.

Ever since Kellyanne Conway defended the Trump administration’s use of “alternative facts” following the president’s inauguration, nary a week has gone by without a string of stories criticizing the president for his lies and mischaracterizations. The New York Times made a mosaic comprised of them, news outlets keep a running tally of them, and others rank them in end-of-year lists. The media, academics, institutions and other prominent individuals have charged that this “post-truth” politics is “dangerous,” rewiring our brains, leading to creeping fascism, and corroding, subverting, and otherwise threatening democracy.

And with former Vice President Joe Biden remaining a frontrunner for the Democratic nomination, it’s safe to say that Trump’s mendacity is a large part of the reason many Democratic voters are putting their faith in Biden to unseat the president this year. Yet as Tuesday night’s debate showed, playing unabashedly fast and loose with the facts is one of the very things Biden shares with Trump.

Tuesday’s debate saw yet another instance of Biden being confronted about his role in leading the country to war in Iraq, and choosing to lie about it.

“It was a mistake to trust that they weren’t going to go to war,” he said in relation to his October 2002 vote to authorize the war. “They said they were not going to war … The world, in fact, voted to send inspectors in and they still went to war. From that point on, I was in the position of making the case that it was a big, big mistake and from that point on, I moved to bring those troops home.”

As fact-checkers have pointed out repeatedly, and as I detailed multiple times for In These Times, almost every part of this statement is a lie. Biden knew George W. Bush’s ultimate goal was regime change because he himself spoke openly about the need to remove dictator Saddam Hussein from power as early as February 2002. By June of that year, when asked about a leaked White House directive for the CIA to help capture and kill Saddam, Biden gave it his nod of approval on CBS’s “Face the Nation” and said that “if the covert action doesn't work, we'd better be prepared to move forward with another action, an overt action,” which the Associated Press reported as an endorsement of an invasion. That month, Biden’s aides told Roll Call that the then-senator had told Bush he supported regime change in Iraq.

The next month, Biden said on “Fox News Sunday” that Bush would have the authority to pre-emptively invade Iraq if it was revealed that Saddam was in league in al-Qaeda—“justifiably given the case being made,” as he put it. And after voting to authorize the invasion, Biden embarked on a world tour to drum up support for the impending war, traveling to neighboring Jordan, Israel, Qatar and even to Kurdish-run northern Iraq, speaking to the Kurd parliament and assuring them the United States would stand with them.

Once the Iraq war began, far from “making the case that it was a big, big mistake,” Biden remained perhaps its most implacable cheerleader, even as the rest of the Democratic Party rapidly turned against it. Biden insisted in July 2003 that he would “vote to do it again,” referring to the invasion of Iraq, told the Brookings Institution that “Iraq was a problem that had to be dealt with sooner rather than later,” and flatly replied “No” when asked if Howard Dean’s steadfastly anti-war views should become the consensus of the Democratic Party. Instead of moving to bring the troops home, in August, Biden called for an infusion of 20,000-50,000 more U.S. soldiers into the country.

Indeed, Biden held his pro-war attitude all the way through 2004 and that year’s presidential election. At the Democratic convention, he told the Pennsylvania delegation that Bush’s only “mistakes” were sending too few troops into Iraq and the administration’s poor planning for reconstruction, warning the delegation not to focus too much on Bush’s blunders lest Democrats “begin sounding like we’re rooting for failure.” As Democratic candidate John Kerry’s foreign policy advisor, Biden vowed to both party members and those watching at home that Kerry would “not hesitate to unleash the unparalleled power of our military—on any nation or group that does us harm—without asking anyone’s permission.”

As Bernie Sanders’ campaign assailed Biden for his role in the war ahead of Tuesday’s debate, Kerry, who has endorsed Biden and is now a campaign surrogate, returned the favor, lying about Biden’s record. Kerry has said that the October 2002 vote “didn’t mean you were in favor when the administration made the decision of actually going to war.”

This statement doesn’t square with Biden’s March 2003 vote for a Senate resolution backing Bush’s decision to go to war, or Biden’s words just days before the invasion: “I support the president. Diplomacy over avoiding war is dead,” and “Let loose the dogs of war. I’m confident we will win.” Nor does it square with Biden’s March 9, 2003 op-ed for the Wilmington, Delaware News Journal, which began: “I happen to think we will go to war with Iraq. And I happen to think the military phase will go relatively well. It’s a war that is justified.” Nevertheless, Kerry has insisted that “Bernie is regrettably distorting Joe’s record,” and that “Joe spoke out and criticized, Joe was against what they were doing.”

This pattern of dishonesty is nothing new. Biden has come under criticism during the campaign for repeatedly telling a moving war story that never actually happened, at one point telling his audience it was “the God’s truth” and they had his “word as a Biden.” Last year, his campaign made headlines when several passages from Biden’s climate plan turned out to be plagiarized. The candidate has also revived an old lie for this election, telling crowds that he had “come out of the civil rights movement,” and that he had “got involved in the civil rights movement as a kid.”

What’s notable about this particular lie is that it was one of the things that had ended Biden’s election hopes back in 1987. Though that presidential campaign had largely gone down in flames over a separate plagiarism scandal, it had also died a death by a thousand cuts over a series of other revelations calling into question Biden’s honesty.

One of these revelations concerned Biden’s frequent allusions to his supposed civil rights and anti-war activism, deployed particularly—though not exclusively—during his years opposing busing. In one Senate hearing, he told the former president of San Francisco State College that he had been a student demonstrator, and he had said during the campaign that “we marched to change attitudes” during the 1960s.

Reporters soon poked holes in the story, and Biden was forced to admit that “I was never an activist,” and that “the civil rights movement was an awakening for me, not as a consequence of my participation but as a consequence of my being made aware of what was happening.” Bobbie Greene McCarthy, a friend of Biden, told the media Biden had been “for a long time pretty much a supporter” of the Vietnam War, and Biden admitted that “by the time the war movement was at its peak, I was married. I was in law school. I wore sports coats,” and so not involved in such activism. He was, he explained, “a middle-class guy” and “not big on flak jackets and tie-dye shirts.”

In other words, both in Tuesday’s debate and beyond, Biden has exhibited the same kind of disregard for the truth as Trump. And this is far from the only characteristic they share.

Many liberals have despaired at the way Trump’s insults and coarse language have disrespected the office of the presidency, and more generally dragged political discourse into the gutter. Yet in December 2019, a crowd of Biden supporters clapped and cheered as the former vice president responded to a critical question from a voter about his son’s dealings in Ukraine by challenging the man to a push-up contest and an IQ test, before calling him fat. (The campaign later tried to claim Biden had said, “Look, facts”).

Democrats have rightly criticized Trump’s flouting of the rule of law, particularly his calls for his former White House counsel to ignore a Congressional subpoena. Yet Biden initially said he would similarly defy a Republican subpoena to attend Trump’s Senate impeachment trial. Much outrage has greeted the way Trump and his family have profited from his presidency. Yet Biden’s family has long profited from his political career, from his earliest days in the Senate to his final days in the White House. This mixing of family business-dealing and politics ultimately helped embroil Biden in a long-running scandal of his own.

A Biden nomination and (and presumptive victory in November) is still viewed by many Democratic voters as a way to rescue the country from the dishonesty of Trumpism. But it may be time to ask if it would instead simply usher in another version of it.