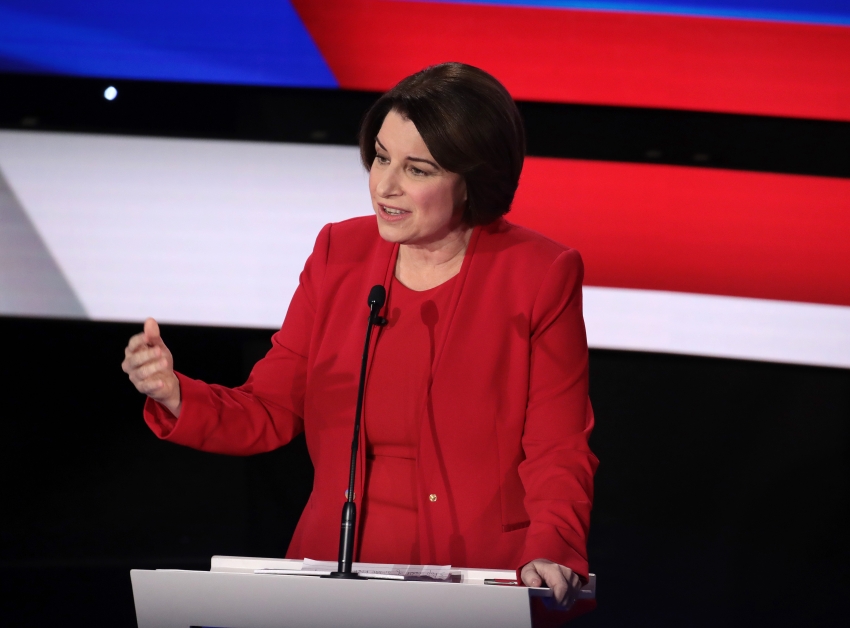 Klobuchar's attacks on Medicare for All follow a long record of defending the private healthcare industry. (Photo by Scott Olson/Getty Images)

Klobuchar has sold herself as a pragmatist who will expand healthcare while being “fiscally responsible.” But her record is one of siding with big business.

In the ongoing intra-Democratic Party debate over the way forward on healthcare, Sen. Amy Klobuchar (D-Minn.) has staked out a centrist position, conforming with her finely honed image as a practical pragmatist. Calling the Medicare for All bill championed by Sen. Bernie Sanders (I-Vt.) a “bad idea,” Klobuchar has refused to co-sponsor it, positioning herself as an opponent of single-payer who prefers instead to “build on the work of the Affordable Care Act.”

In the October Democratic debate, Klobuchar told Sen. Elizabeth Warren (D-Mass.) that “we owe it to the American people to tell them where we’re going to send the invoice,” and urged Democrats not to “trash Obamacare.” She repeated that point in Tuesday night’s debate, saying that to be “practical and progressive … you have to show how you’re going to pay for it.” Deriding her more progressive rivals’ universalist policies as “things that sound good on a bumper sticker” and promises of a “free car,” Klobuchar insists Democrats “have an obligation as a party to be, yes, fiscally responsible,” and “be honest with [voters] about what we can pay for.” Unsurprisingly, Klobuchar has been a proponent of austere “pay-as-you-go” budgeting rules since her first Senate run in 2006, continuing to push the idea on the campaign trail in 2019.

As she makes this pitch, Klobuchar may well hope voters stay unaware of some of her past votes on Obamacare. Over the previous decade, Klobuchar has repeatedly joined forces with Republicans to repeal key Obamacare taxes specifically instituted to ensure the plan’s ongoing fiscal responsibility, sometimes against the wishes of former President Barack Obama. Some of these votes were viewed by both Republicans and the press as building momentum for the dismantling of Obamacare, typically due to pressure from business interests. And in an added irony, it was Sanders who typically voted against those same repeals.

In 2011, Klobuchar helped lead the effort to successfully repeal an aspect of Obamacare for the very first time, barely a year after the bill was signed into law. Requiring businesses to report on a tax form any time they paid a vendor or independent contractor $600 or more a year, the measure was meant to raise $22 billion over ten years, key to Obama’s promise that healthcare reform would be fiscally responsible and reduce the deficit. Unfortunately, it also proved unpopular with business owners.

Repealing the measure was an 8-month-long effort—and Klobuchar led the way. Not only was she one of 12 Democrats to co-sponsor the bill that ultimately passed, but she and two other Democratic senators—Nebraska’s Ben Nelson and Washington’s Maria Cantwell—wrote then-Republican House Speaker John Boehner a letter urging him to have the Republican-controlled House repeal the provision so they could do the same in the Senate.

“We have heard from small business men and women in our states who have voiced concern that this provision is burdensome and unnecessary, and could potentially undermine our nation’s economic recovery,” Klobuchar, Nelson and Cantwell wrote to Boehner. They added that the provision’s repeal “would be an important and practical way to improve the Affordable Care Act.”

Klobuchar first voted for a repeal bill that would have plugged the resulting fiscal hole with unused federal funds. But the version that ultimately passed, with the votes of Klobuchar and 86 other senators, dealt with this funding gap instead by shifting the onus from business owners to ordinary taxpayers. As a result, low-and middle-income Americans who unexpectedly earned over a certain income threshold were forced to pay back more of the law’s health insurance subsidies than they had to previously. Sanders, meanwhile, voted against both bills.

Despite signing the bill into law in April 2011, the Obama White House was far from thrilled with this cost offset, declaring it had “serious concerns” about it, and charging in a March Statement of Administration Policy that it would “result in tax increases on certain middle-class families that incur unexpected tax liabilities.” In both the Senate and the House, where 112 of 188 Democrats voted against the measure, many Democrats—including even more conservative members like Minority Whip Steny Hoyer and Joe Crowley, who would be ousted from his seat by Alexandria Ocasio-Cortez seven years later—complained the measure constituted a tax increase on lower- and middle-income families.

The Consumers Union did the same, expressing “fear that this proposal would have a chilling effect on many families' willingness to use the tax credits to purchase insurance,” and urging “the Senate to find a better way of paying for this change to the law without penalizing those families who can least afford it.” To soften the blow, Sen. Robert Menendez (D-NJ) put forward an amendment that would have put a brake on paying back the subsidies if they were found to increase insurance premiums or the number of uninsured individuals, which was defeated by the votes of Klobuchar and 57 other senators. (Sanders voted for it).

These lawmakers concerns’ were borne out in the years to come. Whether due to the government’s own accounting errors, or taxpayers who had relied on the subsidies suddenly receiving a bonus, raise, or moving from joblessness to employment, these healthcare customers now had to scramble and even dip into their savings to pay back unexpectedly hefty tax bills that could cost thousands of dollars, after having previously drawn on government subsidies.

“Oh my goodness, this is just not right,” one Sacramento resident told Kaiser Health News in 2015 after being put through this ordeal. “This is supposed to be a safety net healthcare and I am getting burned left and right by having used it.”

The result of Klobuchar’s vote was clear. The 1099 repeal she championed pulled the rug out from low- and middle-income Americans who were capriciously forced to pay unexpectedly high tax bills, while also denting the popularity of Obamacare among the voting public, making it more vulnerable to Republican attacks.

In 2012, Klobuchar took aim at the 2.3% medical device excise tax, another revenue-raising measure included in the Affordable Care Act to ensure its fiscal responsibility. Her efforts were again driven by business interests, in this case, those of the medical device industry, which has a significant presence in Klobuchar’s home state of Minnesota where it employs around 30,000 people and is one of her primary campaign contributors.

Chief among them is the world’s largest medical device company, Medtronic, which enjoys a notably close relationship with Klobuchar. The company was Klobuchar’s third-largest contributor between 2011 and 2016, and in 2013, its director of corporate development told attendees at a medical device industry conference that the company was “working closely with Senator Klobuchar” on efforts to repeal the tax. In 2011, Klobuchar invited the company’s chairman and CEO, William Hawkins, to that year’s State of the Union address, a fact she touted on her official Senate website, where she stressed: “it is important that Washington hear from business leaders like Bill.”

In 2012, Klobuchar sent a letter along with her then-Senate counterpart Al Franken and 16 other Democrats urging then-Senate Majority Leader Harry Reid (D-Nev.) to delay implementation of the tax as part of that year’s fiscal cliff negotiations—“in a fiscally responsible manner,” of course. The following year, she and the Minnesota House delegation backed repealing the tax outright, and voted for a symbolic budget amendment calling for an end to the tax. Only 20 senators voted against the amendment put forward by the virulently anti-Obamacare Republican Orrin Hatch, all of them Democrats, except for Sanders.

“Today’s action shows there is strong bipartisan support for repealing the medical device tax, with Democrats and Republicans uniting behind our effort,” Klobuchar said. “I will continue to work to get rid of this harmful tax so Minnesota’s medical device businesses can continue to create good jobs in our state and improve patients’ lives.” Her words were echoed by then-Senate Minority Leader Mitch McConnell, who called the vote “an important step in the right direction” and labeled Obamacare “a job-killer” that “slows the economy.”

Klobuchar wasn’t alone. Several Democrats who took a shot at the 2020 Democratic nomination voted the same way, including Kirsten Gillibrand (D-NY), who dropped out in August 2019, and Elizabeth Warren, currently a frontrunner. Yet even the Washington Post editorial board—which closed out 2019 by extolling Klobuchar’s centrist, bipartisan vision and charging that Sanders and Warren’s progressive programs “would fail at the polls” and “carry extreme risks” if implemented—called it a “shortsighted vote” at the time.

Though in the debate over healthcare, Klobuchar has tried to portray herself as the hard-nosed, fiscally responsible pragmatist trying to protect Obama’s legacy and looking out for the American middle class, her record tells a different story. Rather, Klobuchar has repeatedly gone to bat for business interests when it comes to Obamacare, in the process effectively raising taxes on working Americans, undermining the public standing of Obamacare and violating her own demands of fiscal responsibility.

Healthcare is perhaps the major issue of the Democratic primary. It has been cited by the largest share of Americans as the biggest issue facing the United States throughout 2019. A November Kaiser Family Foundation poll found 24% of Democrats and Democratic-leaning independents want to hear the candidates discuss the issue more than any other—twice that of the environment, the next top issue. And though it has weathered fierce attacks from business-friendly candidates like Klobuchar, Medicare for All has continued to garner majority support in public opinion polling.

Much of the mainstream media have already fallen for Klobuchar, who has received plaudits for debate performances, and is already being talked up as a potential hit with early state voters at this 11th hour. But the public should look past the branding and glowing press to her record, and decide if they truly like what they see.