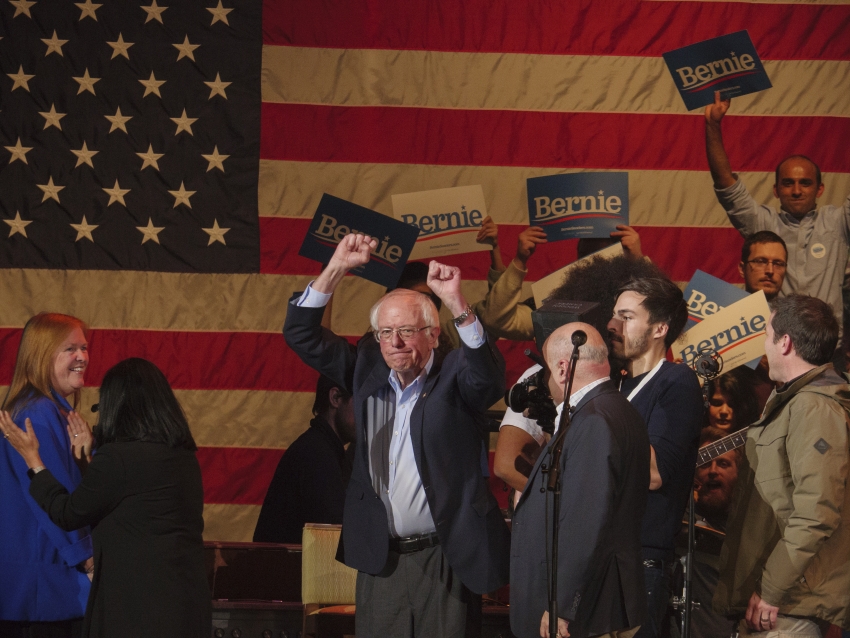 By taking the popular vote lead in Iowa, Sanders has upended the notion that running as a socialist is a liability.

A rupture in the core of the corporate-centric Democratic Party establishment that Rahm Emanuel represents is exactly what a Sanders presidency promises.

In October 2019, less than three weeks after suffering a heart attack that pundits and opponents seized upon to declare his presidential campaign dead in the water, Sen. Bernie Sanders (I-Vt.) held the largest rally of the 2020 cycle in Queens, New York alongside Rep. Alexandria Ocasio-Cortez (D-NY). Following his declaration of “I am back,” Sanders channeled Nelson Mandela in enjoining the crowd of 26,000 that everything, “always seems impossible…until it’s done.”

Sanders’ performance in the Iowa caucuses on Monday—where he maintains the popular vote lead with 71% of precincts reporting—affirms this adage. Throughout the primary campaign, commentators, rivals and establishment politicos across the spectrum have written off Sanders’ candidacy, treating it as an afterthought—or, more recently, as an annoyance to swat away. Despite the Iowa Democratic Party’s bungled reporting of caucus results, which show Pete Buttigieg narrowly leading in state delegate equivalents, Sanders is currently on top by over 1,300 votes. By leading with the most votes in the first contest of 2020, Sanders has proven the commentariat wrong.

The outcome reshapes the primary race, where Joe Biden—long assumed the most “electable” candidate among Democrats—is now coming in a measly fourth. Sanders, meanwhile, is on track to take New Hampshire next week, where a win would establish him as the clear frontrunner. But the results also realize an axiom that many on the American Left have long believed, but has now been demonstrated: Democratic socialism can, in fact, win.

Countless hands have been wrung by paid consultants and strategists over the false fear that the mantle of socialism will sink any candidate seeking the highest office in the land. Just last week, New York Magazine’s Jonathan Chait warned that nominating Sanders would be “an act of insanity,” in large part because of the senator’s identification as a democratic socialist. Aside from the fact that Chait has been wrong about nearly everything in recent political history, including his archetypal 2016 take “Why Liberals Should Support a Trump Republican Nomination,” this liberal panic is simply unfounded.

By claiming the most votes in Iowa—a rural, Midwestern state—Sanders has shown that fears over a Scarlet S have been largely overblown. In reality, the democratic socialist agenda that undergirds Sanders’ political philosophy—free and universal healthcare, taxing the rich, canceling debt, ending wars, expanding workplace democracy and investing in a livable future for the planet—is incredibly popular.

The pundits are already waving their arms, warning that Sanders is uniquely vulnerable to a Red Scare-style takedown because of his political beliefs. On Monday morning, MSNBC host Chris Matthews compared Sanders’ campaign to George McGovern’s failed 1972 presidential bid, saying the Democratic frontrunner reminds him of “some old guy with some old literature from this socialist party or that,” as if Sanders was more akin to a leafleter for the Revolutionary Communist Party than a U.S. senator first elected to Congress 30 years ago.

Meanwhile, at the Atlantic, neocon David Frum proclaims that “Bernie can’t win,” referring to him as “a Marxist of the old school of dialectical materialism, from the land that time forgot.” And Matt Bennett and Lanae Erickson, hucksters for the Wall Street-funded, Democratic centrist think tank Third Way, write in USA Today that Sanders’ socialist ideas are “toxic,” cautioning that “Democrats must not be fooled by him now.”

Even Biden himself, reeling from a disastrous finish in Iowa, is joining in on the swipes. On Wednesday, Biden said: “If Sen. Sanders is the nominee for the party… every Democrat will have to carry the label Sen. Sanders has chosen for himself. He calls him—and I don’t criticize him—he calls himself a democratic socialist. Well, we're already seeing what Donald Trump is going to do with that.”

Such admonition is understandable coming from a political and media establishment that views Sanders’ redistributive platform with scorn: Their concern over “electability” really just masks their ideological opposition to Bernie Sanders’ political project. But that doesn’t make their claims correct.

Majorities of young people, women and Democrats all now say they prefer socialism over capitalism. And survey results from Data for Progress show that in a general election matchup, Sanders’ identification as a socialist would not be a liability against Trump. Interestingly, the results indicate that Sanders performs better against Trump when he’s identified as a “socialist” and the president as a “billionaire,” versus Democrat and Republican, respectively. As Vox concludes from the study, “tagging Sanders as a socialist did not seem to undermine his campaign.”

University of California political scientist Gabriel Lenz’s research has shown that, in general, voters “adopt their preferred party’s or candidate’s position as their own.” As a result, voters are less likely to be turned off by a candidate identifying as “socialist” if they generally agree with or approve of that candidate.

Sanders is the most popular hopeful in the race and is the most trusted on the issues most important to Democratic voters. And Sanders is reliably beating Trump in polls both nationally and in battleground states across the country.

Rather than serving as a hindrance, Sanders’ political philosophy could actually benefit him in the country’s heartland. Chicago City Council member Carlos-Ramirez-Rosa, himself an outspoken democratic socialist, writes in NBC News that “Far from being allergic to socialism and class struggle… the Midwest has always been a region steeped in it—even leading the way.”

By positioning himself as a candidate of and for the working class, Sanders has won the backing of low-wage workers and young people of color—constituencies that will be key to winning the White House in November. In many ways, Trump’s perfect foil is Bernie Sanders: the son of an immigrant family who grew up poor, has been consistent in his political beliefs his entire life and has made workers the center of his campaign—and billionaires like Trump the enemy.

The threat Sanders poses to Trump has been raised by none other than Trump himself. Leaked audio from a 2018 phone call showed Trump expressing relief that Hillary Clinton chose Sen. Tim Kaine (D-VA) rather than Sanders for her vice presidential nominee in 2016. “Had she picked Bernie Sanders it would've been tougher. He's the only one I didn't want her to pick,” Trump said. “Because [Sanders'] a big trade guy. You know he basically says we're getting screwed on trade. And he's right.

So, if Sanders does indeed have a real shot at beating Trump, why are so many in the Democratic brass sounding alarms over his rise? It could have something to do with the fact that Sanders has made the corporate wing of the Democratic Party his foe ever since he launched his first presidential campaign in 2015. In June 2019, Third Way president Jon Cowan called Sanders an “existential threat to the future of the Democratic Party.” More recently, centrist guru Rahm Emanuel said on ABC’s This Week, “The fact is one of the threats to the party right now is a rupture in the core.”

A rupture in the core of the corporate-centric Democratic Party establishment that Emanuel represents is exactly what a Sanders presidency promises. Which is the reason moderates like John Kerry are opening the door to jumping in the race to stop Sanders if his momentum continues to grow. Such gambits give the lie to the idea that party insiders are interested in representing the democratic will of the people. Instead, they want to protect the neoliberal consensus that’s dominated the party for the past 40 years—and which Sanders’ campaign threatens.

Donald Trump has already laid out his strategy for the coming general election. “A vote for any Democrat in 2020 is a vote for the rise of radical socialism and the destruction of the American dream,” Trump said at a rally in June 2019. And in Tuesday night’s State of the Union address, Trump proclaimed: “socialism destroys nations, but always remember, freedom unifies the soul.”

Trump is running against socialism, that much is clear. That game plan won’t change whether or not Bernie Sanders is the Democratic nominee.

But Sanders boasts an asset that no other Democrat running can claim: He knows how to explain—and defend—democratic socialism in a way voters can understand.

In a widely-touted speech last summer, Sanders explained that in contrast to demagogues like Trump who “meld corporatist economics with xenophobia and authoritarianism,” his democratic socialist vision seeks “a higher path, a path of compassion, justice and love.”

Achieving that higher path means rejecting the kind of market fundamentalism that has dominated U.S. politics for decades, pitting working people against each other to fight over scraps while oligarchs grow their fortunes and fortify their political influence. Sanders’ socialism seeks to redistribute not just the wealth of the billionaire class but also its power, injecting more democracy—and, as a result, freedom—into American society.

As political science professor, Corey Robin explains at the New York Times, “The socialist argument against capitalism isn’t that it makes us poor. It’s that it makes us unfree. When my well-being depends upon your whim, when the basic needs of life compel submission to the market and subjugation at work, we live not in freedom but in domination. Socialists want to end that domination: to establish freedom from rule by the boss, from the need to smile for the sake of a sale, from the obligation to sell for the sake of survival.”

Establishing such a system and curtailing the role of unfettered capitalism in governing our lives may seem a Herculean task, even impossible. But after Sanders’ performance in Iowa, it’s possible that this more egalitarian future is firmly within our grasp.