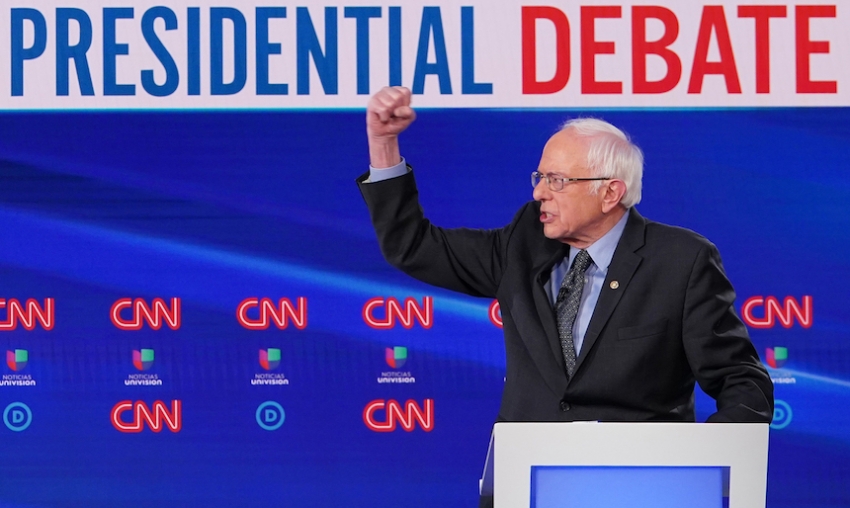 Bernie Sanders at the presidential debate in Washington, D.C. on March 15. (Photo by Mandel Ngan/AFP via Getty Images)

Bernie Just Laid Out a Humane Approach to Dealing with the Coronavirus. Biden Did Not.

In Sunday’s debate, Sanders made a clear-eyed case for taking the profit motive out of healthcare, while Biden railed against “revolution.”

Sunday’s Democratic debate featured urgent questions about how presidential candidates Bernie Sanders and Joe Biden would address the coronavirus pandemic. As the outbreak spreads across the United States at a breakneck pace, officials are faced with two paths of how to respond: hand off public services and assets to further enrich the corporate elite, or expand social programs to protect the working class.

In her influential book The Shock Doctrine: The Rise of Disaster Capitalism, Naomi Klein warned of how free market fundamentalists exploit crises like 9/11 and Hurricane Katrina—but at the same time, Klein highlighted the opportunities for positive social change inherent in “communal recovery” to crisis. As disasters make apparent the deep inequities at the heart of our capitalist society, they allow us to rethink and, in Klein’s words, “remake” the world in order to benefit working people.

Sanders has laid out an expansive vision of government intervention to deal with coronavirus, including implementing a Medicare for All system to provide universal testing and treatment for those who contract the virus, as well as free healthcare going forward for all Americans, regardless of income. Sanders also called for guaranteed paid sick leave and a national moratorium on evictions, home foreclosures and utility shutoffs as immediate steps to deal with the crisis.

“What we’ve got to do is move aggressively so that every person in this country understands that they don’t have to worry about money for treatment. I believe in Medicare for All, I will fight for that as president. Do not worry about the cost right now because we are in the midst of a national emergency,” Sanders said during Sunday’s debate, continuing later, “This coronavirus pandemic exposes the incredible weakness and dysfunctionality of our current healthcare system.”

Biden, meanwhile, has endorsed free testing and treatment for coronavirus patients and emergency paid leave, but refused to back Medicare for All, citing concerns about the cost, pragmatism and wisdom of such a universal system.

“You have a single payer system in Italy, it doesn’t work there. It wouldn’t solve the problem at all,” Biden claimed Sunday.

Biden’s critique misses the fact that coronavirus patients in Italy are receiving all of their care free of cost, whereas in the United States, the cost of simply getting tested can reach above $3,000, and the House coronavirus response package recently passed with bipartisan support, which would make testing free, has yet to be signed into law.

The safety threat of the crisis can’t be overstated. The New York Times has reported that up to 214 million Americans could become infected with the virus—over 60% of the population—and 1.7 million could die. What’s more, up to 21 million may require hospitalization, while the country’s healthcare system currently has less than 1 million staffed hospital beds. This could lead to a catastrophic result, where the system becomes overwhelmed and doctors are forced to make impossible decisions about which patients get to live and which don’t, as has already been the case in Italy.

But the potential fallout from the crisis goes much deeper, threatening to bankrupt businesses and individuals alike as a result of the halting of economic activity. Over half of all Americans live paycheck to paycheck, relying on a regular influx of cash to pay for bills, rent, childcare and healthcare costs. If their income is stunted by their work shutting down or by getting sick and being forced to stay home, these millions of people face financial disaster—especially with social safety programs having been undermined and restricted in recent years.

“What we have got to address is not just the current economic crisis, but also address the fragility of the economy, in which so few have so much and so many have so little,” Sanders said during the debate.

Biden has used the pandemic as an opportunity to illustrate the flaws of the Trump administration—which are indeed glaring—while Sanders has taken a wider lens, using it as an opportunity to illustrate the flaws in a society that prioritizes profit above all else.  The divide between the two was highlighted in the headlines of dueling CNN op-eds from the candidates, published Sunday. Biden’s read, “The virus lays bare the shortcomings of the Trump administration,” while Sanders’ declared, “Coronavirus highlights the flaws in our healthcare and economic systems.”

The outbreak has put those flaws on full display. On March 12, the Federal Reserve pumped $1.5 trillion in short-term loans into financial markets to help stabilize them. Trump’s Treasury Secretary Steven Mnuchin is asking Congress to upend the 2010 Dodd-Frank financial reforms—put in place to protect from another collapse—as a way to deal with the economic impacts of coronavirus. And Trump himself has floated bailing out the fossil fuel, airline and cruise industries as part of his administration’s response.

Meanwhile, the Democratic-controlled House’s response package excludes a full 80% of the workforce from the bill’s paid sick leave protections. At a time when the richest 10% of America’s families claim 70% of all wealth in the country, Whole Foods—owned by Jess Bezos, the richest man in the world—has encouraged employees to “donate” their own paid leave to fellow workers who get sick.

These responses from the political and corporate establishment don’t come close to dealing with the crisis that’s spreading like wildfire across the country. Doing so will require transforming national priorities, from protecting corporate interests to protecting human life.

Throughout the debate, Biden brushed away Sanders’ calls for a transformative approach, saying “People are looking for results, not a revolution.”

The crisis shows not just the callousness of the current system but the potential for radical change. Pushed by necessity, governments have been responding with measures socialists have long called for: Cities such as Miami and New York are halting evictions. Others like Detroit are reversing their water shutoff policies. Even Trump has announced that those with student loans administered by the government will see their interest fees waived during the crisis.

These policy changes reveal that government has always had the power, and the ability, to protect the most vulnerable residents—it’s just previously chosen not to pursue them. But with the virus becoming a clear and present danger, Americans are realizing more and more that the function of our government must be to provide safety and care for its people. According to a new Morning Consult poll, 41% of adults now say that the outbreak has made them more likely to “support universal healthcare proposals, where all Americans would get their health insurance from the government.”

At the debate, Sanders stated, “This is not the time for profiteering.” If the coronavirus outbreak can show us anything, it’s that when it comes to basic human needs, profiteering never has a place in society. Only solidarity does.