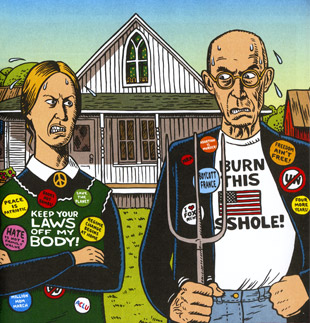 Could a cartoon bring down the Bush administration? Maybe not, but that won’t stop Ward Sutton from trying.

Ward Sutton’s satirical art has appeared in mainstream venues such as TV Guide, Entertainment Weekly, Rolling Stone and Time. But his labor of love is the no-holds-barred comic strip he’s been drawing for the Village Voice since 1998, now available in the full-color collection, Sutton Impact: The Political Cartoons of Ward Sutton (Seven Stories Press). Sutton recently spoke to fellow cartoonist Mikhaela Reid from a farm in Bismarck, North Dakota, where he is taking a break from New York life to produce an animated short film.

You used to do a lot more cartoons about pop culture. But since 2000 your strip has become almost exclusively political. Why?

After college I got a job as cartoonist for the weekly Twin Cities Reader in Minneapolis. It was the first Gulf War that was the real tipping point for me, politically. I thought the war, and the media coverage of it, was disgusting. I went to Washington, D.C. to march in protest and also marched in Seattle and Minneapolis–and then got arrested for civil disobedience at the federal building in Minneapolis.

I also drew cartoons on the war. But one day the powers that be told me, “the war isn’t funny anymore.” This led to me hand-delivering letters to the editor on the war when they wouldn’t let me draw cartoons about it anymore.

Part of what it takes to make a living working as an illustrator is to work in a way that appeals to editors and art directors. So in addition to my weekly strip, which was about politics but also social and pop-culture issues, I began doing all sorts of things. Lots of freelance illustration, then I got a whole other avenue of expression from creating rock posters.

There is the work I do to pay the bills and the work I do to feed my soul. My weekly strip is something that has never paid much money at all, but it has allowed me to express what I really feel.

But you are correct. The 2000 “election” was so troubling I couldn’t imagine taking my time to comment on other things when it began to feel like the world was regressing so horribly.

It was one of those that I sent off and wondered if I’d be hearing back from some papers that they didn’t want to run it. Some people may see that cartoon as “juvenile” or “offensive,” but that is part of the point. I don’t use imagery that may be seen as shocking or offensive gratuitously. I believe the “shock and awe” bombings were deeply offensive on a human and moral level. It felt like many people didn’t see it that way.

Exactly! I also try to draw what I see as the truth in my cartoons. And I fully believe that Rumsfeld “gets off” on war, on violence, on power–just like many others in the Bush mob.

Another of your most disturbing–and I think powerful–cartoons shows Laura Bush holding a small charred corpse and asking Americans to “Please Read to a Dead Iraqi Child!” How did readers react to that piece?

I read that aloud as part of my presentation on this tour. And it is a hard piece to read. But I believe it really says something I think needs to be said. So every time I give a presentation I feel the groans and discomfort from the audience.

Your caricature of Bush has devolved over time. Pre-2000, you drew him with only slightly distorted features. But now your Dubya caricature is one of the most grotesque in the business, a creepy, squeaky, sniveling chimp-like man-doll.

In your cartoons, you make fun of people who use Internet activism as an excuse to avoid real activism. Your character laments “Can’t we just have a virtual rally at a web site?” Do you still find time to attend rallies? Can cartooning itself be activism?

Could a caricature help take Bush down? I never want to overestimate the power of a cartoon, however, why underestimate it either?

And can a caricature help that? I think it can. People don’t want to be associated with the person everyone thinks is an idiot. That would be a day to really celebrate. When the facade comes crashing down and no amount of spin can put it back together.

Although you serve up plenty of black humor, your work also strikes me as optimistic.

Someone recently asked if I thought my cartoons would make people cynical. I said I hope they don’t–I know they can be dark, and can be depressing in ways, but I also think there is a power for people to see what they are thinking reflected back to them, a power in feeling like someone understands how they feel.

And also making a statement that says to the powers that be in this country, “you’re not fooling anyone–we can see right through you.”

Less preaching to the choir, and more rallying the choir?

Yes! In the next four years, I really hope for a sense of balance to return to the national debate. I like to hope that politics are somewhat cyclical in nature. In the last four years I’ve been scared that we’ve crossed some line, and we won’t be able to get back, but I hope that isn’t true.

Me too. I don’t want to spend the rest of my life in Crazyland.

I’d like to see some karma come back to Bush, Rove, Cheney–the public finally realizing the emperor has no clothes. I really hope the Downing Street memo can gain traction. It took a long time for Watergate to really gain traction, I’m hoping that can happen here. We CANNOT move along thinking war is the only way to solve problems. If we can fully discredit how we got into Iraq, maybe it will prevent their next planned attack in the “War on Terror.” But I think the Democrats really need to find a voice and a backbone. I’m glad Dean is there at least.

So let’s say Bush gets impeached and/or the Democrats pull it off in 2008. Would you be as critical of a Democratic administration as you are of the Bushies?

I’m not going to join in the chorus of Rush dittoheads attacking President Hillary. I will attack Hillary if I think she is a sellout, or too conservative, or corrupt, or makes some really bad mistakes and refuses to admit them. But to just attack any president just because they are the president isn’t non-partisan, it’s just cynical in my opinion.

Aside from war and torture, are there one or two issues that are particularly near and dear to you?

The issue that I see as crucial is simply the issue of the truth. I think most problems, most injustices, most cruelties occur because of a repression of the truth in one way or another. Lack of communication in the world, lack of honesty, causes so much harm.

But what happens when groups believe two totally different truths? For example, red-staters who believe being gay is evil, is there any arguing with them?

I think “two truths” can possibly coexist in a way IF both sides agree to acknowledge each other AND agree on the basic principle that all people should have basic human rights.

For example, I think people have the right to dislike homosexuality, or dislike blacks, or dislike Jews or whatever. You can’t stop that. But when you start saying this group isn’t really people … they can’t marry … they can’t have children … they are slaves with no rights … they belong in concentration camps … then it’s no longer possible.

So this right-wing Christian fundamentalist movement based on fear of those who are different and using them as scapegoats–that’s very troubling to me.

And back to the idea of “two truths” existing, if both are acknowledged. I believe history can say that some believed we had to go after Saddam, but the right doesn’t want to acknowledge that others very rightfully believe the whole thing was a pack of lies.

They act as if the slightest opposition constitutes treason.

Yes! And that kind of thing just makes me want to make my cartoons even more outrageous!

Mikhaela B. Reid is a Brooklyn-based political cartoonist for inthesetimes.com and other publications. Her cartoons and blog can be seen online at her Web site.