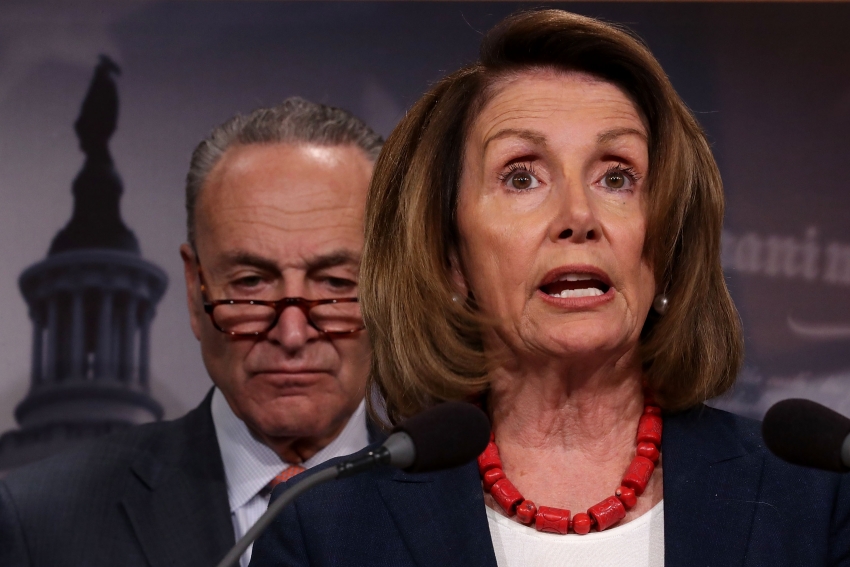 Bernie Sanders, Elizabeth Warren and Alexandria Ocasio-Cortez are calling on Trump to curb the suffering. Where is Democratic leadership?

While U.S. sanctions technically include a “humanitarian exemption,” this exemption is largely in name only.

Amid growing calls to lift U.S. sanctions on Iran, which are worsening the country’s staggering coronavirus death toll by cutting off vital medical supplies, the top leadership of the Democratic Party is remaining conspicuously silent. This inaction amounts to tacit consent for the Trump administration’s “maximum pressure” campaign, which has worsened the death toll of the country’s COVID-19 outbreak—a crisis that is killing one Iranian every 10 minutes, according to Iran’s health ministry.

On March 31, 34 members of Congress released a letter to Secretary of State Mike Pompeo and Treasury Secretary Steven Mnuchin urging them to “substantially suspend sanctions on Iran during this global public health emergency in a humanitarian gesture to the Iranian people to better enable them to fight the virus. Sanctions relief that should be considered are those that encompass major sectors of the Iranian economy, including those impacting civilian industries, Iran’s banking sector and exports of oil, and should last for at least as long as health experts believe the crisis will continue.” The initiative was led by Rep. Alexandria Ocasio-Cortez (D-N.Y.), Rep. Ilhan Omar (D-Minn.) and Sen. Bernie Sanders (I-Vt.) and includes prominent signatories, among them Sen. Elizabeth Warren (D-Mass.) and Rep. Rashida Tlaib (D-Mich.).

The letter followed another March 26 letter led by Sen. Chris Murphy (D-Conn.) expressing concern about the impact of U.S. sanctions on the coronavirus pandemic in Iran and Venezuela—and calling for a 90-day waiver “of sectoral sanctions that impede a rapid humanitarian response” (11 senators total signed on).

Yet, powerful Democrats have been absent from these efforts: Nancy Pelosi (D-Calif.), the speaker of the House, Chuck Schumer (D-N.Y.), Senate minority leader, and Rep. Steny Hoyer (D-Md.), House majority leader, were all missing from the list of signatories. All three have also noticeably steered clear of statements condemning U.S. sanctions. On March 20, Pelosi published a tweet marking the celebration of Nowruz, the Iranian New Year, in which she mentioned “all those in Iran who have lost loved ones and those who are suffering during this challenging time.” The tweet did not say anything about the role of the U.S. in worsening this suffering.

This role is significant. While U.S. sanctions technically include a “humanitarian exemption,” this exemption is largely in name only. In practice, a complex web of sanctions, coupled with U.S. intimidation and threats, have dissuaded companies from doing business with the country. Even before the coronavirus outbreak, human rights groups warned that U.S. sanctions were cutting off  key medical supplies, including drugs needed to treat cancer and epilepsy. Since the pandemic began, these sanctions have become catastrophic, leading to severe shortages in key supplies needed to address the coronavirus crisis, including ventilators, syringes and infusion pumps. Doctors in Iran have repeatedly warned that U.S. sanctions are making the coronavirus death toll—now at 2,898—far worse.

A medical doctor working at a small community hospital in Shiraz, who requested anonymity, told In These Times via email, “The U.S. sanctions have severely impacted Iran's health care system because we are struggling for medical supplies and personal protective equipment and we cannot scour the globe due to unjust sanctions imposed on Iranian people. Even domestic manufacturers have difficulty buying raw materials to produce their own supplies because of the monetary difficulties.”

Democratic Party leaders’ failure to condemn these sanctions did not go unnoticed. Erik Sperling, the executive director of Just Foreign Policy, told In These Times, “This is a moment of really serious danger for the Iranian people, and Pelosi and Schumer, despite supporting the Iran deal at various points, won’t even speak out against the Trump administration's cruel policy.”

“Them being absent signals to the vast majority of Democrats that this isn't a priority for the Democratic Party and not worth challenging Trump and the American Israel Public Affairs Committee (AIPAC) on,” Sperling continued. AIPAC, a right-wing pro-Israel lobby organization, has supported the Trump administration’s escalation of sanctions on Iran, calling them “strong and effective.”

The March 31 letter did include lawmakers who chair various congressional committees: Rep. Jim McGovern (House Rules Committee), Rep. Peter DeFazio (Transportation and Infrastructure Committee), Rep. Raúl Grijalva (House Committee on Natural Resources), Rep. Nydia Velázquez (Small Business Committee). However, Yasmine Taeb, senior policy counsel at Demand Progress, an activist organization, agreed that the absence of the top Democratic leadership was conspicuous. “It’s a travesty that Democratic leadership and the broader Washington establishment are not doing all in their power to allay the suffering of the people of Iran while we are in the middle of this global crisis,” she told In These Times.

This failure to speak out against U.S. sanctions on Iran goes beyond Democratic leadership in Congress. On March 29, Democratic Party presidential frontrunner Joe Biden was asked by Chuck Todd on Meet the Press if he would lift sanctions on Iran. Biden responded, “I don't have enough information about the situation in Iran right now. And I’m not sure there’s any evidence that—there's a lot of speculation from my foreign policy team that they're in real trouble and they're lying. But I would need more information to make that judgment. I don't have the national security information available.”

These remarks, however incoherent, indicate that Biden is unwilling to condemn U.S. sanctions on Iran even when directly asked. This position contrasts with that of Sen. Sanders, Biden’s opponent in the Democratic primary, who has been a vocal opponent of the sanctions.

There are signs that Democratic Party institutions skew closer to Biden than Sanders on the issue of Iran sanctions. The Center for American Progress (CAP), arguably the most influential think tank within the Democratic Party, is falling short of calling for full sanctions relief. On March 12, when the coronavirus crisis was raging, Brian Katulis, a senior fellow at CAP, and Peter Juul, a senior policy analyst for the think tank, co-authored a piece published on CAP’s website calling for “limited sanctions relief in exchange for opening a new dialogue with Iran—similar to an interim deal crafted in 2013 that preceded the negotiations that led to the JCPOA [the Iran nuclear deal].”

This is a far cry from the call for full and unqualified sanctions relief being issued by a bevy of social justice organizations. It seems leading Democratic Party foreign policy thought leaders are more interested in using the suffering in Iran as an opportunity to polish off a new soft-power grab than in joining activists in calling for the immediate, unqualified cessation of the current sanctions regime.

Another piece co-written by the same authors, published on CAP’s website March 11, acknowledges that “despite built-in humanitarian exceptions, U.S. sanctions also makes it more difficult for foreign companies and organizations to provide Iran with medical equipment that could help Iranians better cope with the coronavirus outbreak.” However, in the very next sentence, the piece argues against returning to the Iran deal. “At the same time, however, this diplomacy-first alternative also understands that the United States can’t simply return to the 2015 international nuclear deal with Iran either,” they write. Instead, they argue for a new interim deal that addresses “the legitimate security concerns of America’s Middle East partners, including implementing Obama-era security cooperation agreements with the Gulf Arab states.”

Katulis, a senior fellow at CAP, is known for his close relationship with one of the primary “Gulf Arab states” in question, the United Arab Emirates, and he continued meeting with UAE and Saudi lobbyists even after CAP said it had stopped taking UAE money, following Saudi Arabia’s murder and dismemberment of journalist Jamal Khashoggi (Saudi Arabia is a close ally of the UAE). Katulis’ insistence that any sanctions relief, even in the midst of a pandemic, be tethered to the interests of Gulf countries, is notable given that the United States is currently helping the UAE and Saudi Arabia wage a brutal war against Yemen that is now five years old.

But Democratic leaders’ role has gone beyond tacit acceptance through inaction. In the summer of 2017, Democrats in both the House and the Senate overwhelmingly voted in favor of a bill bundling together sanctions against Iran, Russia and North Korea. Sen. Sanders was the only person who caucuses with the Democrats who issued a “no” vote. That legislation preceded Trump’s 2018 withdrawal from the Iran nuclear deal and paved the way for his far harsher sanctions. Notably, some of the signatories to the March 31 letter voted in favor of the 2017 sanctions, among them Rep. Barbara Lee (D-Calif.) and Sen. Warren.

Keyvan Shafiei, a PhD student at Georgetown University who is originally from Iran, says the 2017 sanctions cost his father’s life. Shafiei told In These Times that his father passed away in southeastern Iran, in the province of Kerman, in October 2017 because he was unable to obtain life-saving drugs as a result of summer 2017 sanctions. At the hospital, says Shafiei, “I befriended a lot of other people who had family in ICU. they were going through the same ordeal. I interacted with so many ordinary working Iranians who had family in the ICU, and the hospitals could not get them those drugs.”

Shafiei has been active in efforts to oppose Iran sanctions during the coronavirus crisis, joining a broad coalition of social justice organizations demanding immediate reprieve. Twenty-five organizations—including National Iranian American Council Action and Win Without War—signed on to a letter released March 20 calling on “Sec. Mnuchin, and Sec. Pompeo to loosen the administration's crippling sanctions regime on Iran for 120 days in order to aid the Iranian people’s fight against the virus.” Groups including the Democratic Socialists of America, Win Without War and MPower Change have joined #EndCOVIDSanctions, a campaign aimed at “pressuring Steven Mnuchin, U.S. Secretary Treasury and the Office of Foreign Assets Control to lift sanctions on Iran,” according to a statement.

Shafiei says the “indifferent complicity” of Democratic Party leaders “is even more glaring now, while a global pandemic claims innocent Iranian lives under a regime of brutal U.S. sanctions, and Democratic leaders, such as Nancy Pelosi and Chuck Schumer, refuse to heed the calls for a lifting of these cruel economic measures that have significantly worsened the outbreak of the coronavirus in Iran.”

As the Trump administration doubles down on—and even escalates—sanctions in the midst of the pandemic, the situation in Iran grows more dire. UN High Commissioner for Human Rights, Michelle Bachelet, called on March 24 for sanctions relief in Iran and other countries fighting the coronavirus.

“We are losing people every day,” the doctor in Shiraz said. “So many medical workers are risking their lives every day because there are not enough personal protective equipment, and they get sick and die for being exposed to COVID-19 patients; basically, they are sacrificing their lives. The majority of people are blaming the situation on U.S. sanctions.”