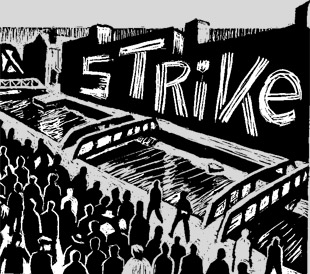 Power to the Pictures

One hundred years ago this June, the Industrial Workers of the World (IWW) was founded in Chicago. And at the end of July, the AFL-CIO celebrates its 50th anniversary. The IWW has only about 5,000 members now; the AFL-CIO about 13 million. But it’s the IWW that inspired this engrossing new short history, filled with stories of heroic efforts by America’s downtrodden workers to improve their lives, and of brutal repression. Several talented graphic artists–including Seth Tobocman, Tom Keough, Sue Coe, Spain Rodriguez and Carlos Cortez–employ styles drawn from woodblock prints, comic books and political cartoons to vividly bring their struggles to life.

It’s not that the AFL-CIO hasn’t had its heroes. But few can match Joe Hill, the Swedish immigrant organizer, cartoonist and songwriter, or Frank Little, the “half white, half Indian and all Wobbly” miner, both of whom were killed for fighting the mining companies. Hill was executed by the state of Utah in 1915. Two years later, after suffering severe injuries fighting for striking miners, Little was dragged from his bed by Anaconda Corporation vigilantes who beat him viciously, then lynched him from a railroad trestle with a warning note to others.

The Wobblies–nobody knows exactly how they got the nickname–were founded in a “continental congress of the working class,” involving such leading lights of the American left as Big Bill Haywood, Eugene V. Debs, Mother Jones and socialist leader Daniel DeLeon. An alternative to the craft-oriented and often discriminatory AFL, the Wobblies argued for One Big Union of all workers, organized by industries, who would use direct action on the job to fight not only for better conditions but for direct control of the economy by workers themselves.

Within a few years, many of the founders had left, and the IWW collapsed in the ’20s as much because of factional disputes as the severe repression. The Wobblies eschewed electoral politics in favor of direct action confrontations with capitalists. Yet despite this contempt for electoral politics, they benefited from progressive governments–such as the sympathetic Non-Partisan League officials in North Dakota who not only refused to attack them but protected their free speech rights. In most cases, though, the Wobblies suffered incessant local, state and federal government attacks. Hundreds of leaders were rounded up during World War I as threats to national security, even though the IWW, unlike the Socialist Party, did not officially oppose the war, seeing it as irrelevant to the class struggle. Although they might not have prevented all attacks, political action could have tempered this repression.

With some exceptions (such as a long-lasting, black-led Philadelphia local), they also tended to avoid contracts and even long-term organization. In some of their most celebrated struggles, such as the 1912 Lawrence, Massachusetts textile strike and the 1913 Paterson, New Jersey, silk workers strike, the Wobblies largely provided skilled, leadership as conflicts developed, then lost influence later.

But the Wobblies’ legacy has nevertheless been long-lasting and pervasive. They created a popular, radical, working-class culture of songs, legends, cartoons, newspapers and much more–largely preserved by the Charles H. Kerr Press, publisher of Franklin Rosemont’s exhaustive biography of Joe Hill and many other related books. When unionists or radicals gather today, they are still likely to sing “Solidarity Forever,” an anthem by Wobbly Ralph Chapin, and the IWW Little Red Songbook kept workers inspired for much of the century. Wobblies! mainly recounts the most celebrated strikes, not the tactics on the job, including sabotage, that Wobblies employed, but Susan Simensky Bietila depicts in soft-edged imagery the way the IWW flooded towns with organizers who took to soapboxes in defense of free speech, often getting out only a few words, like “fellow workers and friends….”

Although it was an authentically American movement (which nevertheless incorporated many recent immigrants), the IWW also was a pathbreaking internationalist organization that affected left and labor activity in many countries, including Mexico. For example, Christopher Cardinale and Giuliana Chamedes, influenced by the graphic style of Mexican artist José Guadalupe Posada, tell the story of Primo Tapia. This Mexican immigrant farmworker organized a Nebraska sugar beet refinery for the IWW in 1919 before returning to Mexico to organize peasant farmers into the League of Agrarian Communities. He was killed by Mexican soldiers in 1926.

With their stirring battles for free speech–often filling the jails of small towns where officials were trying to suppress their organizing–the Wobblies laid the basis for the American Civil Liberties Union and free speech battles that continue today. It’s also fitting that this well-researched and sympathetic account of the IWW appears as a graphic novel, given the role of cartoons–such as Mr. Block, the misguided worker who takes the boss’s viewpoint–in Wobbly literature.

The Wobblies were innovators who made great headway organizing crucial but marginal and unstable groups of workers, such as transient agriculture workers in the upper Midwest, as recounted in Frank Tobias Higbie’s fascinating 2003 study, Indispensable Outcasts. Today, the Wobblies continue the tradition, organizing Starbucks baristas and bicycle messengers. The rest of the labor movement might take some inspiration from the IWW to organize the growing ranks of contingent workers. The movement’s work persists in groups like the Chicago Coalition for the Homeless and the groups described in Vanessa Tait’s recent book, Poor Workers’ Unions.

The Wobbly strategy of creating a worker-controlled socialism through direct action without also trying to win power through the ballot box had fatal shortcomings. But the Wobblies’ combination of grassroots democracy, direct action and visionary politics is a reminder of the limitations of the current debate on reviving the AFL-CIO. There are echoes of the radical IWW priest Father Thomas Hagerty’s “wheel of fortune”–dividing the IWW into industrial departments, such as transportation, agriculture, mining, public service, and manufactures–in the current Service Employees union proposal for a few big unions concentrated in major industries, but not much else from IWW tradition. Hagerty envisioned not only each industry being organized top-to-bottom through a department of the One Big Union but also society itself being organized through this wheel of fortune. Today the idea that workers themselves can run industry is far from most union debates.

Wobblies! devotes relatively little attention to why the IWW ultimately failed. But it is a powerful and accessible reminder of why their struggles remain inspiring.