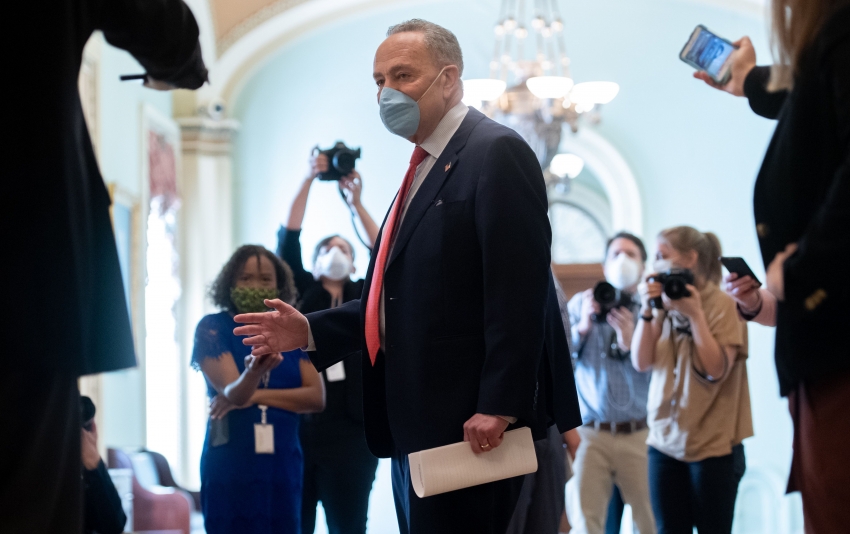 Your turn, Democrats. (Photo by SAUL LOEB/AFP via Getty Images)

The Absolute Minimum That Democrats Should Demand In the Next Stimulus

The next stimulus package must include aid to state and local governments, protections for employed and unemployed workers, and investments in our democracy.

In response to the coronavirus, Congress has passed a series of bills allocating more than $2 trillion to relief and recovery programs. However, these measures have been insufficient in scope and magnitude to address the severity of the economic and public health crisis we are experiencing. Further, lawmakers have failed to include key provisions that would address the needs of working families in this crisis. As a result of these policy missteps, the relief and recovery measures have not done nearly enough to mitigate the level of pain working people are experiencing or to ensure that the economy can get back on track after the shutdown period is over. It is critical that Congress correct its failures in future relief packages. The Congressional Budget Office (CBO) projects that without additional relief, the unemployment rate will average 16% in the third quarter of this year. As a point of comparison, the highest the unemployment rate reached in the Great Recession was 10%, and it reached that level for only one month. CBO projects that without additional relief, the unemployment rate will average 10.1% for the entire calendar year 2021.

Any additional relief package must include the following:

The CARES Act provided a temporary boost to unemployment compensation, including an increase in the level of benefits, an extension of state unemployment insurance (UI) benefits, the creation of a Pandemic Unemployment Assistance (PUA) program that will be available to many workers who are not eligible for regular unemployment insurance (like gig workers), and funding for short-time compensation (STC) programs, also known as work-sharing, that avoid layoffs by allowing employers to reduce work hours of employees while those employees receive partial UI. These provisions are very important and will help millions of people.

However, much more must be done. For example, the undocumented immigrants who make up 5% of the U.S. labor force are currently excluded from these programs, which is not only a humanitarian disaster, but also a public health disaster. Without these benefits, undocumented immigrants who are employed and get sick have every incentive to keep working rather than quarantine. And undocumented immigrants often work in essential occupations, including in key elements of the food production supply chain. (For example, roughly half of all farmworkers are undocumented immigrants). The 1.6 million migrant workers employed with temporary visas are also vulnerable because they have a precarious immigration status that is controlled by their employers: If laid off they lose work authorization and become deportable, yet many will not be able to return home because of travel restrictions and border closures. As a result, they should be able to access UI and have their work authorization extended during the national emergency.

Unemployment compensation coverage should also be expanded to include new entrants to the labor market who don’t have any work history, (for example young people finishing high school and college) or students who had jobs during the school year but lost them when campuses shut down or who would have worked during the summer but now cannot. Further, none of the temporary provisions to boost unemployment compensation because of the coronavirus crisis should be allowed to expire at an arbitrary date, as they currently do. Given the enormous uncertainty around how the next weeks and months will unfold, arbitrary end-dates make little sense. The next relief and recovery bill must include triggers that allow these programs to phase out slowly and only as economic conditions warrant. This is critical given that the unemployment rate is likely to be over 15% when the additional $600 per week in compensation is set to expire at the end of July 2020, and is likely to be over 10% when PUA program eligibility sunsets at the end of 2020. These provisions should not be allowed to fully expire until the employment-to-population ratio for adults between the ages of 25 and 54 is within two percentage points of its February 2020 level. Further, additional funds should be allocated for the administration of unemployment compensation programs.

Shoring up the gaps in the current policy plans we’ve chosen to fight the economic shock caused by the coronavirus is the highest priority at the moment, and many elements of these current plans are extraordinarily valuable—like the major expansions of the unemployment insurance (UI) system mentioned above. However, it is far from clear that this is the only economic shutdown we will have to undertake to fight the current epidemic—or future ones. We could well see major swathes of the U.S. economy needing to re-enter a state of hibernation for periods of time in the coming fall or winter if the virus begins spreading rapidly again. Given this, a more-transformative plan to rapidly let money flow to workers through the payrolls of their current employers can allow this hibernation to happen with much less economic pain and anxiety for workers. Over time and with much investment, lots of this work could be done near-exclusively through an unemployment insurance system that is permanently enhanced and kicks on automatically at scale when a large crisis hits. But until that type of world-class UI system is built, having a payroll protection plan that can allow parts of the economy to shut down while seamlessly keeping workers paid and firms in business is something policymakers should explore. Plans by Representative Jayapal (D-Wash.) and a Senate plan co-sponsored by Sanders (I-Vt.), Warner (D-Va.), Jones (D-Ala) and Blumenthal (D-Conn.) are examples of this type of payroll guarantee, modeled on plans from other countries (like Denmark and the United Kingdom) that moved in this direction.

The coronavirus pandemic lays bare the long-standing failure of existing laws to protect workers and the lack of power far too many workers have in the workplace. Weak worker protections cost thousands of workers’ lives each year and are now leaving essential workers unprotected on the job during this crisis. As a result, workers continue to be required to work without protective gear. Sick workers continue to lack access to paid leave. And, when workers try to speak up for themselves and each other, they are fired. Workers are dying as a result.

Policymakers must include enhanced protections for all workers performing essential work during this crisis. These workers must have the right to a safe workplace and full access to personal protective equipment (PPE) as well as protections ensuring that they can speak up without fear of retaliation if their employer is not providing the required PPE. Finally, Congress should include enhanced protections for workers who become sick as a result of workplace exposure. Under no circumstances should worker protection laws and regulations be waived or put on pause.

Invest in our democracy

An essential component of any additional relief and recovery package must be additional investments to protect our right to vote. Lawmakers must act now to establish safe, alternative voting methods—like vote-by-mail—especially before November’s general election.

The CARES Act included $400 million in “election security grants” to prevent, prepare for, and respond to the coronavirus domestically for the 2020 federal election cycle. This is far less than fair election advocates argued was necessary to protect our elections during the pandemic. The Brennan Center for Justice, for example, released a plan calling for a $2 billion investment to ensure that the 2020 election is free, fair, accessible, and secure.

As more states explore alternative ways of casting ballots, Congress must provide resources responsive to the magnitude of the challenge. A failure to provide sufficient investments to safeguard elections would amount to the most successful effort at voter suppression and disenfranchisement since the end of the Reconstruction period following the Civil War. We must demand investment in our democracy infrastructure and more voting options.

This is only a small list of the policies additional legislation must include to ensure that relief and recovery investments help working families and those most impacted by this crisis and that the recovery following the coronavirus shutdowns is rapid and broad-based. More must be done to provide relief to those who have experienced job loss as well as the loss of employer-provided health insurance. Significant investments—including large-scale hiring of public employees—must be made in testing and contact tracing. Safety net programs must be shored up to meet the scale of the economic crisis facing us, including food assistance programs like Supplemental Nutrition Assistance Program (SNAP) and Women, Infants, and Children (WIC), rent and mortgage relief measures, guaranteed paid sick time to all workers, and guaranteed health care to all essential workers. Further, to avoid amplifying coming job losses and to maintain necessary public services that under-resourced communities rely on, relief must be provided for the U.S. Postal Service to ensure their ability to continue operations. The prior relief and recovery packages have failed to provide sufficient relief to those most impacted by this crisis. Additional recovery packages must correct this failure while we still have an opportunity to mitigate the rapidly growing pain working families are experiencing at this moment and will continue to endure without commanding action by Congress.

This was first posted at the Economic Policy Institute.