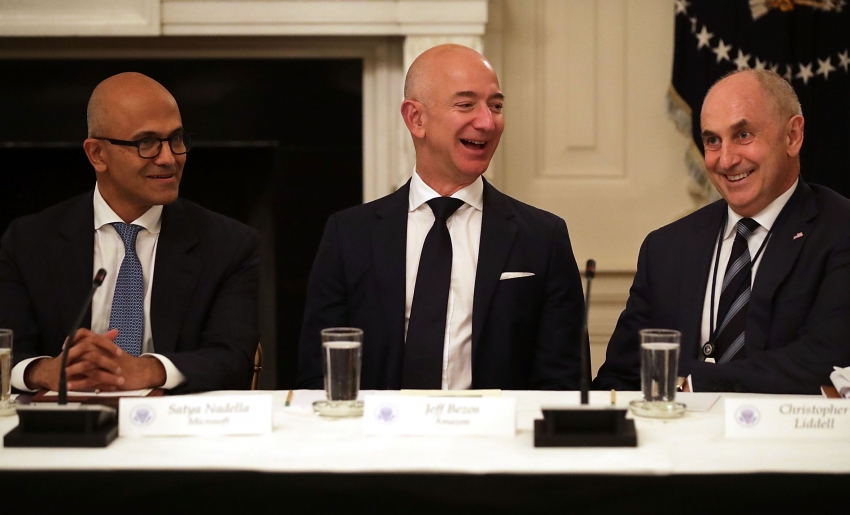 The pandemic has been a massive boon for the richest Americans. (Photo by Chip Somodevilla/Getty Images)

The U.S. Response to Covid-19 Has Lavished Wealth on the Rich

While the pandemic ravages American workers, the federal government has orchestrated a monumental transfer of wealth from the bottom of the economic ladder to the top.

The novel coronavirus has already claimed over 70,000 lives in the United States since the pandemic began to spread throughout the country earlier this year—a figure topping total U.S. casualties during the course of the Vietnam War.

The Trump administration is predicting the death toll will soon skyrocket, with 3,000 deaths a day becoming the norm by early June—even as the president and his fellow Republicans urge a “reopening” of the economy. Due to the structural inequities baked into our economic and healthcare systems, the fatalities caused by the virus have disproportionately been borne by African Americans.

Alongside this devastating loss of life, over 30 million Americans are newly out of work due to the shutdown and lack of a robust response from the federal government. Nearly a third of all renters can’t afford to pay their monthly rent. Half of all Americans now say they or someone in their home has lost hours or a job due to the pandemic. The unemployment rate is widely predicted to surpass 30% in the coming months, which a Columbia University study estimates will plunge over 21 million more Americans into poverty.

And it’s not just individuals. Over 40% of all small businesses are on the verge of permanent closure. And states and local governments are also facing financial ruin as their costs balloon while revenues dry up. As a solution, Senate Majority Leader Mitch McConnell (R-Ky.) recommends that states facing budget shortfalls simply declare bankruptcy—a prospect that experts say risks causing a prolonged depression in America.

Yet, as this pandemic wreaks havoc upon working people the country over, it has also had another stark impact: making the rich ever richer.

According to a recent report from the Institute for Policy Studies, America’s billionaires saw their wealth shoot up by $282 billion in just 23 days as the country was sheltering in lockdown. Overall, U.S. billionaire wealth grew by nearly 10% at the same time over 20 million people filed for unemployment, and by April 10 had passed $3.2 trillion—topping last year’s level.

To take just one example, Jeff Bezos, Amazon CEO and already the richest person in the world, saw his fortune inflate by $24 billion in the first three months of the year, a surge the report’s authors say is “unprecedented in the history of modern markets.” Meanwhile, his workers have staged a series of walkouts and other labor actions to protest a lack of basic workplace protections as warehouse employees have fallen ill with the virus, and some have died.

As mass death overtook the country in April and the economy went into free fall, the U.S. stock market saw its best month in over three decades, a boon that has overwhelmingly benefited the richest people in the country. Private healthcare companies have seen major gains, boosting the fortunes of healthcare billionaires, just as an estimated 9 million Americans were booted off of their employer-sponsored insurance plans—a figure that could soon climb to 43 million.

But what of the widely touted stimulus measures passed by Congress? While some relief was included in the form of direct cash payments of $1,200, expanded unemployment insurance and loans to small businesses, each of these programs was tainted with acute flaws.

The direct payment plan excludes millions, including undocumented immigrants, U.S. citizens married to noncitizens, many college students and other dependents. And even among those who are eligible, millions have not yet received their checks and some may have to wait up to five months. At the same time, thanks to a change to the tax code tucked into the relief package, 43,000 Americans who make more than $1 million will be saved an average of $1.7 million annually, costing U.S. taxpayers $90 billion in 2020 alone.

Expanded unemployment insurance, while helping provide support for those newly out of work, also incentivized companies to lay off their workforces rather than retaining them while the government continues to provide them paychecks, as countries like the UK and Denmark are doing. The process of applying for the program has been deemed a “nightmare” for millions attempting to navigate an overwhelmed system. What’s more, workers at businesses newly deemed “essential” such as meatpacking, are now being forced back to work, often in unsafe conditions—and those who refuse over concerns about their safety will lose this unemployment aid.

The Small Business Paycheck Protection Program, meanwhile, turned out to be a bust for actual small businesses. Of the original $350 billion allocated for these businesses in the CARES Act, over $243 million ended up going to large corporations. This includes the subsidizing of massive chains, luxury hotels and even Trump “megadonors” like Monty Bennett, chairman of Ashford Hospitality Trust, who Forbes says “is believed to have received at least $59 million.” As a result, only 5% of all small businesses were able to access those funds, and over 30 million are still struggling to receive relief.

Meanwhile, the banks handling these loan applications made off with $10 billion in fees—including many of the same banks that were bailed out by taxpayers during the last recession in 2008. For their wealthiest clients, the New York Times reports, these banks—including JPMorgan Chase and Citibank—offered “concierge treatment” to put their applications at the front of the line.

Such galling inequities written into the stimulus are just the tip of the iceberg. The true callousness of the approach can be seen most clearly in the corporate welfare at the heart of the relief effort. While often posed as a $500 billion fund for large companies, in fact, the CARES Act allocated over $4 trillion to corporate America, since the federal reserve can leverage the initial funding by a ratio of ten to one.

That fund is being overseen by Treasury Secretary Steven Mnuchin, himself no stranger to corporate abuse and profiteering. Soon after signing the bill, Trump moved to undo independent oversight in the program. And the corporations receiving this funding will not be required to keep their workers employed, or even to limit executive compensation.

This aid will flow to some of the largest and most powerful companies in the country, which are also the ones with the most liquidity and therefore ability to withstand the economic impacts of the shutdown. And as we saw in the wake of the 2008 financial crisis, bailing out large corporations with taxpayer money only increases their stranglehold over our economy.

Taken together, the U.S. federal government’s response to the Covid-19 crisis has led to a monumental transfer of wealth from the bottom of the economic ladder to the top. At a time when the poorest and most vulnerable Americans are facing the direst consequences of the deadly pandemic, they’re simultaneously seeing their tax dollars earmarked to further profit the richest and most protected.

This asymmetrical response forecasts an American future further defined by oligarchy and deep-seated social stratification. As the concentration of wealth and power accelerates, the ability of working people to eke out a living will be more and more constrained.

Still, this moment of crisis also offers another path: the opportunity to fundamentally restructure our national priorities to bolster those most in need—by finally making the wealthy pay.

According to the Institute for Policy Studies report, taxes paid by billionaires fell by 79% between 1980 and 2018. Over this period, corporate taxes have similarly been drastically cut, including by President Trump in his 2017 Tax Cuts and Jobs Act. As a result of this shift, government coffers have dried, social safety net programs have been slashed, the working poor have been squeezed and the 1% have accumulated more money than they could spend in multiple lifetimes.

When it comes to the U.S. response to the Covid-19 crisis, billionaire tech investor Chamath Palihapitiya estimates that “only five to 10 cents of every dollar that’s being spent or guaranteed by the federal government is going to the average American.”

Instead of pursuing such a market fundamentalist approach, Congress could, for example, institute a wealth tax; significantly raise both the corporate and top marginal tax rates; guarantee free healthcare to all; cover 100% of unemployed workers’ paychecks and provide $2,000 monthly cash payments to all Americans during the pandemic; cancel rent, mortgage payments, and all student and medical debt; and enact a federal jobs guarantee to carry out testing and contract tracing so that we can all safely emerge from this crisis. Politicians from Reps. Alexandria Ocasio-Cortez (D-N.Y.) and Ilhan Omar (D-Minn.) to Sens. Bernie Sanders (I-Vt.) and Richard Blumenthal (D-Conn.) have already put forward these types of bold policies to respond to the economic toll of the pandemic.

Such proposals may seem far-fetched. But then, think of the strategy currently being carried out by the federal government: sacrificing American lives in the service of accumulating capital. It’s the status quo that’s radical. If there was ever a time to upend it, it’s now.