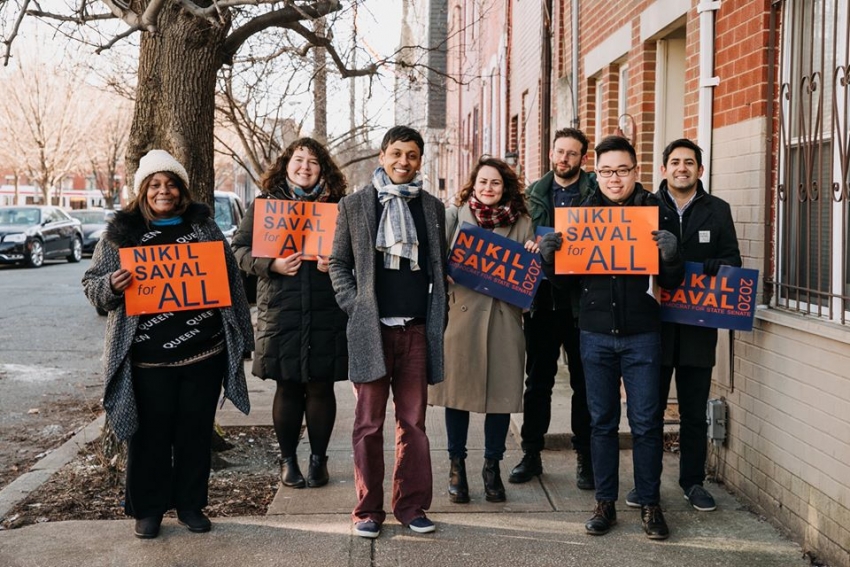 Nikil Saval, co-founder of post-2016 Bernie group Reclaim Philadelphia, won his primary on June 2 and will be on the ballot in November. (Via Facebook / Nikil Saval)

Socialists and other Bernie Sanders supporters can play a critical role in defeating right-wing populism while building a left-wing alternative for the long term—by going down-ballot.

Concentrated electoral activism in a few places can mobilize more Democratic-leaning nonvoters than the energy spread out from national presidential campaigns.

The mainstream media made hay over the Democratic Socialists of America’s (DSA) commitment to endorsing no one but Bernie Sanders for president. Despite the DSA’s public statement recognizing Donald Trump as a global threat, the organization will not back Joe Biden. Of course, defeating Trump does mean a President Joe Biden (absent some dramatic change), but that still doesn’t mean left-wing groups should endorse by default. In fact, Biden likely doesn’t want our public support. He appears intent on repeating the Clinton 2016 playbook: Rely on a critical mass of progressives to vote against Trump, make no real policy concessions to mobilize other left-wing voters, then make up the difference by pulling in moderates.

But socialists and other Bernie Sanders supporters can play a more important role in defeating Trump—by electing left-wing lawmakers in down-ballot races.

Democrats must dominate national turnout to beat the GOP in 2020. Compare, for example, 2016 to 2012: Trump tallied 2 million more votes than Mitt Romney, while Hillary Clinton netted slightly less than Barack Obama. Regardless of party, nonvoters are more likely to cast a ballot when they are directly engaged. Because of this, concentrated electoral activism in a few places can mobilize more Democratic-leaning nonvoters than the energy spread out from national presidential campaigns.

In the New York state Senate’s 18th District, DSA member Julia Salazar handily defeated incumbent Martin Dilan in 2018—by nearly 20 points, with the help of DSA and a coalition of progressive groups. Turnout skyrocketed to 36,000 from just under 10,000 in the previous two primaries. While Dilan more than doubled his vote total, Salazar quintupled that of the previous challenger in each prior race. In New York, my single vote, in a vacuum, will have no impact. But my time spent volunteering, knocking on doors, sending texts and other down ballot electioneering efforts in Pennsylvania certainly will. There, three democratic socialist incumbents are up for their state rep seats. They’re joined by first-time socialists candidates Rick Krajewski and Nikil Saval, co-founder of post-2016 Bernie group Reclaim Philadelphia, who won their primaries on June 2. All five campaigns deserve support and will help swing this critical 2020 state.

People’s Action, a national, multi-racial activist network with numerous local affiliates, gets this. It has endorsed candidates in state-level primaries in August in the swing states of Michigan, Minnesota and Wisconsin, many of whom are challenging establishment Democrats.

In Detroit, Democrat Rep. Rashida Tlaib, an open socialist, is in a tough congressional primary fight, which serves as her de facto general election in this blue district. Tlaib’s presence in Congress has played a critical role in building the power of the Left, putting forward a bold response to the Covid-19 crisis and pushing monthly stimulus payments into mainstream conversation. Socialists and Sanders supporters should participate in get-out-the-vote efforts for her August 4 primary—and, should she win, we should continue to drive November voter turnout for her in this swing state.

Building the bench of elected leftists impacts future national politics, too, by building an electoral pipeline. My mantra to fellow activists while I was Our Revolution’s political director: “Bernie Sanders was mayor first.” The good government and public municipal works projects from the “sewer socialists” of early 20th-century Wisconsin, for example, built a voting bloc that sent the Socialist Party’s Victor Berger and the Progressive Party’s Robert La Follette to Capitol Hill. With Rep. Alexandria Ocasio-Cortez (D-N.Y.) as an exception, the Squad all held state and municipal office before heading to Washington.

Another contemporary example is Candi CdeBaca, a fellow DSA member and Denver City Council member. CdeBaca led the Mile High City to cancel its for-profit prison contracts and helped pass a resolution to protect renters during the pandemic. Elected socialists like CdeBaca are showing the kind of leadership Trump is absolutely failing at—which raises the consciousness of voters we hope to win over.

Our politics is best suited to fighting the long-term problems created by capitalism. By volunteering (even remotely) for candidates endorsed by groups like DSA, Our Revolution and the Working Families Party, we can grow a real, long-term progressive alternative while helping defeat right wing populism right now—before it’s too late.

The views expressed above are the authors’ own. As a 501(c)3 nonprofit, In These Times does not support or oppose candidates for political office.

David Duhalde is the vice chair of the Democratic Socialists of America Fund, DSA’s sister educational nonprofit. He is the former political director of Our Revolution and former deputy director of DSA.