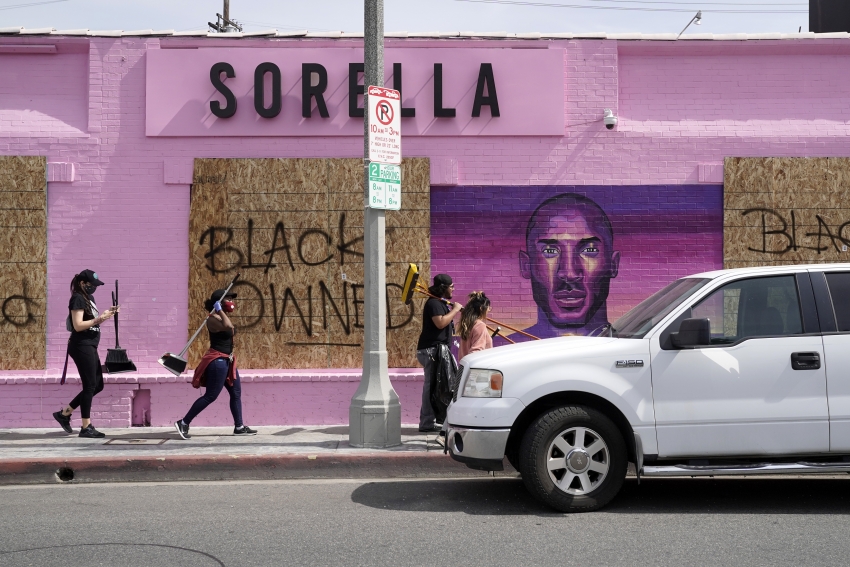 the SBA’s inaction follows a decades-long tradition of failing to support its mandate to help business owners of color. (Photo by Warrick Page/Getty Images)

The SBA’s consistent failure to adequately fulfill its congressional mandate, especially in the age of Covid-19, requires that we reimagine what the agency could look like.

In recent weeks, it’s become increasingly clear that the federal government has failed to protect minority-owned businesses from the pandemic’s economic fallout. According to data published by the National Bureau of Economic Research, the number of black-owned businesses decreased by 41% between February and April. For the businesses that have survived, their cash balances decreased by 26%, compared with a 12% decline overall.

While Congress enacted two small business loan programs to be administered by the Small Business Administration (SBA), many entrepreneurs of color, who are facing disproportionate effects of the current economic crisis, did not receive emergency funding. Meanwhile, large and well-connected companies, some of which are owned by members of Congress, walked away with over $1 billion in loans from the SBA.

Trump’s SBA not only failed to support businesses struggling the most in the midst of the pandemic, but it failed to fulfill its purpose as defined by Congress. When it first created the agency, Congress specifically outlined the SBA’s obligation to support entrepreneurs from socially disadvantaged groups, who faced (and continue to face) limited access to credit, lower credit scores, a lack of relationships with financial institutions and lower levels of personal wealth.

In the Small Business Act of 1953, Congress wrote: “[T]he opportunity for full participation in our free enterprise system by socially and economically disadvantaged persons is essential if we are to obtain social and economic equality for such persons and improve the functioning of our national economy.” In Section 8(a) of the Small Business Act, Congress laid out the SBA’s particular responsibilities to aide “small business concerns owned and controlled by socially and economically disadvantaged individuals so that such concerns can compete on an equal basis in the American economy,” whether that meant a leg up in federal contracting, management assistance, or whatever else the SBA determined would aid entrepreneurs of color.

These facts illustrate just how vital the SBA’s programs remain for minority-owned businesses. Yet, by all accounts, business owners of color have faced disproportionate financial suffering during this pandemic, despite the two small business loan programs administered by an agency with a specific mandate to assist them.

Consider the larger of the two SBA loan programs: The Paycheck Protection Program (PPP). PPP uses private financial institutions to issue federal loans to small businesses that can later be forgiven, so long as the business spends 60% of the funds on payroll expenses. Since the program’s rollout, SBA failed to issue clear guidance to lenders, or conduct adequate oversight. As a result, banks prioritized larger, better-connected businesses. Plus, simply by the nature of the program’s first-come-first-served design, those bigger and better-connected businesses swallowed up most of PPP’s initial funds, leaving many minority-owned businesses to wait until the second round of funding was approved. By then, many businesses had already closed their doors for good.

For those business owners of color who actually got their hands on PPP money, the loans turned out to be less useful than imagined. Minority-owned small businesses are less likely to have employees but were still only permitted to use 40% of their PPP loans on non-payroll expenses.

That’s where the SBA’s smaller program—the Economic Injury Disaster Loan Program (EIDL)—could have come in handy. EIDLs provide small businesses with more flexible capital that can be used for a variety of business expenses, not just payroll. Additionally, businesses that apply for EIDL are eligible to receive a $10,000 advance on the loan that does not need to be paid back. Unfortunately, the SBA arbitrarily limited the amount of money businesses could receive from the $10,000 grants, and long wait times have left many business owners without any funds months after Congress created the program. And if business owners of color didn’t apply months ago, they won’t qualify for EIDL now: Treasury Secretary Steven Mnuchin limited the program to allow only agricultural businesses in April.

The disparities in access to SBA loans for business owners of color are stark. In a recent report, UnidosUS and Color of Change found that only 1 in 10 Black or Latinx-owned small businesses received the PPP assistance they requested. Another report from Goldman Sachs found that only 79% of Black business owners applied for a PPP loan, compared with 91% of small businesses overall—and that 26% of black business owners have less than one month of cash reserves compared with 17% overall. These disparities might have been reduced but for the SBA’s failure to instruct lenders to prioritize underserved businesses, including minority and women-owned businesses.

Through the SBA’s 8(a) business development program, minority-owned businesses can compete for set-aside government contracts and receive management and technical training. Yet since its inception, opportunistic white entrepreneurs have defrauded and abused the program, while the SBA has failed to ensure money got in the right hands.

In 1977, the Washington Post reported that white-owned businesses were fraudulently applying to the program, procuring lucrative government contracts meant for minority-owned businesses. Meanwhile, actual business owners of color in the program reported that they lacked technical support and guidance from the SBA. One black small business owner reported that the SBA offered to let him split a contract with a company owned by the white brother-in-law of an SBA employee. Two Nixon officials received 8(a) contracts. One federal official received an 8(a) contract for his business that had no assets or employees and then subcontracted all the work to white-owned businesses.

In 1979, in response to the abuse, the SBA Office of Inspector General (OIG) released a report that found that one in five 8(a) participants were defrauding the program. The Government Accountability Office (GAO) found the 8(a) program’s eligibility criteria were not applied uniformly, and the SBA failed to properly report data on participants.

Congress attempted to improve the 8(a) program in 1978, 1980, and 1988, but it continued to be mismanaged and plagued by fraud. According to GAO, most of the program’s dollars went to a small number of firms, and the program’s management training did not provide minority-owned businesses with the tools to become self-sufficient businesses, evident from their lack of non-8(a) clients after graduating from the program. The GAO also reported that the 8(a) program lacked resources and failed to properly record data on the participating firms – in other words, they conveniently were unable to track the improvement (or lack thereof) of participants.

Even after continued reports of mismanagement and fraud, the SBA failed to effectively implement GAO’s recommendations. In 1996, the GAO reported that, while the SBA had made some progress, 8(a) was still not optimally supporting minority-owned businesses. The report criticized the program for only graduating three businesses. Again in 2000 and 2008, the GAO reported that the program was understaffed and under-resourced and had failed to implement recommendations to improve the program and reduce fraud. This lack of resources meant the SBA could not effectively support minority-owned firms participating in the program or ensure participants met eligibility requirements.

In 2009, after years of inaction, ProPublica revealed that the Department of Defense had awarded nearly $30 million in 8(a) contracts to companies under criminal investigation for falsely claiming to be small minority-owned businesses. In 2010, GAO discovered that 14 ineligible firms received $325 million in 8(a) contracts meant for minority-owned businesses, and in some cases, the SBA was aware of the firm’s ineligibility at the time it gave out the money. As recently as 2018, the SBA inspector general reported the agency failed to remove ineligible companies from the program. Ultimately, it is unclear just how much money has been pilfered from the intended minority business owners due to the SBA’s negligence over the years.

In 1997, the SBA created the HUBZone program, which set aside federal contracts for businesses located in “Historically Underutilized Business Zones.” While not directly providing support to minority-owned businesses, this program served low-income communities, many of which have disproportionate levels of racial and ethnic minorities. This program would help channel funds into these communities, providing much-needed economic opportunity and growth.

Yet, since its inception, HUBZone faced many of the same issues plaguing 8(a). The SBA inaccurately reported data on HUBZone participants, which led to errors in reported levels of growth and achievement, according to one GAO report. Another report criticized the SBA’s communication about program guidelines to participating firms.

Beyond mismanagement and data entry errors, the SBA used inaccurate maps to determine whether small businesses were located in economically distressed areas. A 2008 GAO report found that the SBA awarded HUBZone contracts to small businesses in wealthy communities due to inaccurate maps and failed to address these inaccuracies with regular monitoring required by SBA policy.

Despite the numerous warnings from GAO and OIG, the SBA did not effectively improve HUBZone, and in 2019, the Washington Post reported that $800 million in HUBZone contract dollars went to just 11 businesses, many of which were located in Washington, D.C.’s wealthy neighborhoods, including Dupont Circle, Navy Yard and downtown. Meanwhile, business owners in poorer neighborhoods were left behind. In the program’s 20-plus-year history, it has never once met its goal of awarding 3% of federal contracts to HUBZone firms.

The SBA’s consistent failure to adequately fulfill its congressional mandate, especially in the age of Covid-19, requires that we reimagine what the agency could look like. If future administrations provided the SBA with adequate funding and appointed a Small Business Administrator willing to invest in these defunct programs, the SBA might be able to help build a more inclusive, stronger economy.

Democratic nominee Joe Biden has reportedly begun hearing proposals for closing the racial wealth gap from his economic advisors. He’d do well to look at what tools would already be available to accomplish that ambitious goal should he become president in 2021—the SBA is one of them.

Unfortunately, over the past several decades, presidents have cut the SBA’s budget while its own leaders have supported these cuts in the name of balanced budgets and efficiency. Decades of budget cuts have starved the SBA of the resources needed to conduct proper oversight and tracking of its minority lending programs and its PPP and EIDL programs.

The SBA must do better. As Connie Evans of the Association for Enterprise Opportunity recently told the Senate Committee on Small Business and Entrepreneurship, the pandemic’s “economic consequences are projected to erase decades of minority enterprise growth in underserved markets.” But with a new administration and Small Business Administrator dedicated to uplifting communities of color, the SBA could finally accomplish its long-disregarded goals.

Miranda Litwak is a researcher for the Revolving Door Project.