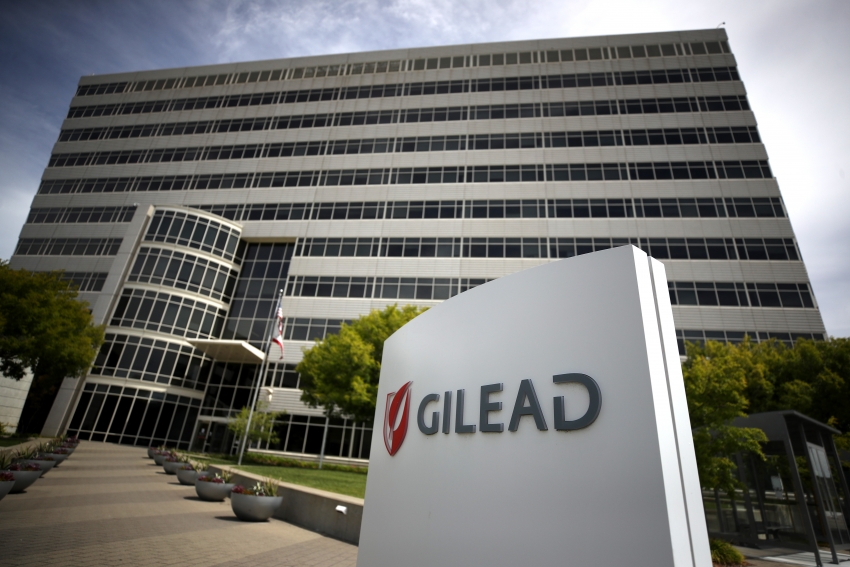 A sign is posted in front of the Gilead Sciences headquarters on April 29, 2020 in Foster City, California. (Photo by Justin Sullivan/Getty Images)

The status quo will kill us.

Many other countries have practices in place that help to keep prices of medicines down.

As the coronavirus pandemic ripped through the globe earlier this year, it seemed for a moment that the scale of the calamity and the depth of desperation for a cure might force governments and industry to prioritize our health above profiteering.

Whatever nationalist bluster and threats came out of Washington or Beijing, scientific collaboration across borders moved forward with great speed and scale. The New York Times reported in April, “Never before, researchers say, have so many experts in so many countries focused simultaneously on a single topic and with such urgency.” The positive results of this ramped up research are beginning to trickle in.

Even the notoriously corrupt pharmaceutical industry had to pause for a breath. In March, Gilead Sciences had obtained the Food and Drug Administration’s “orphan” status classification for remdesivir, a drug which has the potential to treat Covid-19. Orphan status is usually reserved for medicines intended for rare diseases, and comes with great financial windfalls for pharmaceutical companies. But public pressure soon forced Gilead to relinquish its right to the special status.

Fast forward a few months, and very little pretense of fairness remains. Despite benefiting from tens of millions of dollars in taxpayer-supported research, and despite an estimated cost of less than $10 to produce, Gilead Sciences has priced remdesivir treatment at over $3,000 per person. Regardless of the “orphan” status classification, run-of-the-mill patent laws will be effective enough in preventing the adequate distribution of cheaper, generic versions of the drug.

Gilead has already signed confidential licensing deals with pharmaceutical manufacturers in Egypt, India and Pakistan, which will limit the countries in which generic versions can be distributed, and likely the quantity and timeline in which they will be produced. Companies will set their own prices, but royalties to Gilead will be added once another Covid-19 treatment or vaccine is approved, or the World Health Organization declares an end to the public health emergency.

To make matters many orders of magnitude worse, the Trump administration is answering the shameful record of death rates in the United States with America-First rhetoric, and has bought up almost the entirety of treatment courses that Gilead will produce for the next three months. Vital treatment is not only a means of corporate profiteering for the pharmaceutical companies, but also a tool for global domination.

Especially in a pandemic, the logic of market-driven health care leads to price gouging and bidding wars, rather than global cooperation and guaranteed medicine. Though cross-border scientific collaboration is thankfully still ongoing, Big Pharma is primed to make a killing at home and abroad, in the midst of a devastating pandemic.

Gilead’s price gouging track record is well-known. Gilead priced Sovaldi, which can cure Hepatitis C, at $84,000 for a 12-week treatment. “The drug,” explained Terry Allen, “was nearly market-ready in November 2011 when Gilead paid $11 billion cash to acquire Pharmassett, which had forecast a $36,000 price tag for the 12-week course. In December 2013, Sovaldi hit the market at well over twice that price.” Meanwhile Gilead’s other main cash cow is HIV medications. Truvada, which helps prevent transmission, costs nearly $2,000 a month despite a $6 cost of production.

What on earth could justify these gaps?

When the Institute for Clinical and Economic Review (ICER) released its analyses of pricing for remdesivir, it distinguished between “cost recovery” (under $10 per treatment) and “cost-effectiveness,” which weighs the cost of a drug against the costs saved to the health care system, “willingness” (read: ability) of consumers to pay, and a quantified value placed on our lives. In this case, ICER determined the “cost-effective” price or remdesivir could be as high as $4500.

In essence, “cost-effective” pricing is meant to reward companies relative to the costs society would bear if we didn’t have the benefit of the drugs. What would be the cost of several more days on a hospital ventilator, or X number of years lost in a life? Just as patent laws ostensibly encourage innovation (but in fact achieve the opposite), cost-effective pricing, too, is meant to incentivize the development of pharmaceuticals.

“Cost-effective” pricing is generally assumed to be a fairer alternative to the otherwise Wild West approach in which drug makers set pricetags without any framework apart from charging the highest amount they can get away with. But, in fact, even ICER’s watchdog status in the industry has quietly shifted to what pharma companies consider the “least bad option” for cost debates.

Remdesivir, like many drugs, was the result of a public-private collaboration, which took place over the course of many years among governmental organizations and employees, universities, and scientists across the world. Over $70 million of taxpayer funding contributed to its development. The unspoken but understood agreement within the pharmaceutical industry is publicly funded innovation, private ownership of the product.

The unfortunate reality is that there is nothing extraordinary about Gilead’s greed. While Big Pharma uses monopoly positions to profit off of skyrocketing drug costs, “Small Pharma,” including many companies charged with producing cheaper generic drugs, has also created monopoly conditions through acquisitions and patent manipulations. Companies find a drug for which there is little market competition, buy out the firm that produces it, and immediately raise the prices. In this way, smaller companies can mimic monopolistic strategies by cornering markets for particular drugs.

Martin Shkreli’s Turing Pharmaceuticals made those strategies infamous a few years ago when it acquired and then jacked up by 5,000% the price of Daraprim. As Business Insider pointed out, “For drugs like Daraprim, for which only about 8,000 prescriptions are filled a year, it simply isn’t worth it for other companies to try to come up with generic alternatives. This allows for a price monopoly in which the drug manufacturer can set virtually any price it wants.”

These moves have been defended on the basis that super-profits are necessary to fund further research and development. But pharmaceutical companies typically spend, at most, 15% to 20% of their revenues on research and development. And those companies that have most aggressively pursued the acquisition and price-hike model tend to spend much less.

Many other countries have practices in place that help to keep prices of medicines down. The United Kingdom’s National Health Service, for instance, negotiates nationwide drug prices. By negotiating on behalf of the entire country, it exerts “bulk buying power.” American insurance plans and hospitals are obliged to pay whatever prices are set in an unregulated market. Even Medicare is legislatively barred from negotiating drug prices. Instead, we pay whatever the drug companies ask for, and pray that the “invisible hand” of the market leads to more competitive prices.

But competition leads to its opposite in the form of monopolies. Corporations gain in size, or corner a market, precisely so that they don’t have to compete to make the best or most affordable product. Patent laws further entrench monopoly conditions, and hold us hostage to the unlikely good will of Gilead and other companies.

In the context of monopoly positions, the “free market” does not produce price competitions in which multiple firms vying for consumers lower their prices. Instead pharmaceutical companies set whatever price tag they think they can get away with, and justify it as fair under the cover of convoluted economic metrics and “cost-effectiveness.”

Imagine if we applied this framework to the Fire Department. Instead of providing a free, public good to save lives, local fire departments would calculate “cost-effective” prices for their services based on the average amount of value stored in houses, the belongings, and the price of the lives that would be saved in each house. Such a framework would seem barbaric and absurd. But the lifesaving stakes of drug development and distribution are just as critical.

To effectively battle Covid-19 we’ll need international collaboration on research, education and funding, and to widely and freely distribute treatments and vaccines. The virus knows no borders, and neither can its cure. Now that vaccine trials are beginning to go live—and showing some promising signs—we need to prepare for pricing driven by shareholders, competition among companies, and governments stockpiling inventory.

There should be a simple solution to the disaster unfolding. Public funding should translate into public use. Asking “what’s the incentive?” for pharmaceuticals to do the research is the wrong question. Profit as a motive creates obvious conflicts of interest. Instead, we should nationalize the industry and release scientific knowledge to the public domain. Our lives are literally on the line.

Hadas Thier is an activist and socialist in New York, and the author of the forthcoming book A People's Guide to Capitalism: An Introduction to Marxist Economics.