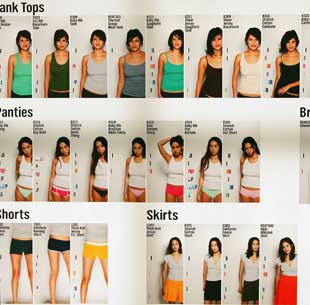 Full disclosure: As I write this piece, I’m wearing a gray American Apparel T-shirt. In fact, I own more than one T-shirt from this company. The clothing is comfy and stylish, and you can get it for a price you can live with and without the burden of supporting sweatshop labor.

Once an obscure clothing manufacturer in Los Angeles, American Apparel stores have recently exploded, with 53 stores opening in five countries since 2003. Meanwhile, their sexy ads dominate the pages of trendy, urban magazines geared to the slightly liberal twenty-something set. Newspapers and TV shows have highlighted the rise of the company, celebrating the success of this self-proclaimed socially conscious, anti-sweatshop clothing line.

Lately, however, both my own experience and recent coverage have made it seem that, like any other clothing company, American Apparel is oppressive towards women and hostile towards workers and unions.

But while the ads can be dismissed as a mere image problem, other, more institutional problems at the company have recently surfaced.

The views he publicly expresses about women are equally dicey. In a Jane magazine article, Charney suggested that women who complain about come-ons at work are suffering from a “victim culture.”

“Out of a thousand sexual harassment claims, how many do you think are exploitative?” Charney asked, before opining, “women initiate most domestic violence.”

But while Charney’s misogynist views have only recently become a public concern, my doubts about the company’s progressive commitments go back further.

Last year, I was living in Chicago and looking for a third job to supplement my freelance writing and catering gigs. When I heard that American Apparel was opening a store in the trendy Wicker Park neighborhood, I rushed to the spacious, luxurious loft apartment in Bucktown where the interviews were being held.

After filling out my application, I was called into the living room to meet my interviewer. But before we sat down, there was something all new applicants had to do. I stood up against the wall, said “Cheese,” and had my Polaroid taken.

“I’ll never get this job now,” I thought. There was an aesthetic they wanted in their employees that I was guessing I didn’t have. But I did have something that I thought would set me apart from the other applicants.

“Why do you want to work here?” my interviewer asked.

“Well, I’ve been a fan of your company’s mission for many years. I used to be active in the United Students Against Sweatshops.”

Apparently, my four years of anti-sweatshop campaigning at the University of Michigan and my affiliation with USAS, which has a track record of forcing many companies to adopt more humane labor standards, was a big black spot on my resume for this “sweatshop free” company.

The interviewer stopped taking notes when I mentioned USAS. She nervously looked straight at me, the first time she had done so in our entire conversation.

It seemed like an odd comment. Everyone I knew from USAS in Michigan either had no opinion of the company or liked it. The worst criticism I had heard was that such a venture doesn’t challenge industry standards, but only creates a niche for sweatshop-free clothes. A valid point, I thought, but even a niche is a place to start.

I asked what she meant.

She huffed that USAS kids in L.A. had worked with UNITE HERE, the garment workers’ union, and aggressively campaigned for a union at the company’s downtown L.A. manufacturing facility. She said that union activists visited the houses of many of the company’s workers to ask them about their workplace and if they wanted a union.

Her impatient tone subsided. She then smiled and told me in a cheery voice that the factory’s workers rallied against the union because working conditions were so favorable.

I told her that I knew nothing about this, and we rushed through the rest of the interview. I never got a call back. While it is possible that my un-hip appearance reduced my chances, I still wondered: Could my association with union activists have blacklisted me from this “progressive” company?

The UNITE HERE campaign was launched in September 2003. Even though American Apparel workers made higher wages, they lacked certain benefits guaranteed to union garment workers. Stephen Wishart, a senior research analyst with UNITE HERE, writes on its Web site, BehindtheLabel.org, “Issues such as no paid time off, lack of affordable healthcare, production methods, and treatment by supervisors were the main issues of workers trying to organize.”

When American Apparel heard the news, management got tough. Wishart reports, “The company’s activities included holding captive meetings with employees, interrogating employees about their union activities and sympathies, soliciting employees to ask the union to return their union authorization cards, distributing anti-union arm bands and T-shirts, and requiring all employees to attend an anti-union rally. The company’s most devastating tactic, though, was threatening to shut down the plant if the workers organized.”

These are rather excessive means, especially for a company that made its name by touting improved labor standards. Eventually, a complaint was filed to the National Labor Relations Board. The company backed off from the tactics, but the plant remains non-unionized as a result of Charney’s union-busting blitzkrieg.

Sure, we should be grateful that the success of anti-sweatshop clothing company shows that companies can make a profit and not exploit overseas workers. But seeing the company’s true intentions, it seems that its claims may just be part of an image designed to lure the younger generation to its product.

I don’t wholly buy the argument against American Apparel that says the company is only creating a niche for sweatshop-free goods. It is like Whole Foods, some argue, a store that doesn’t challenge the grocery store industry standards, but only makes organic food available to a small, bourgeois group that can afford it. American Apparel, according to this logic, doesn’t motivate Nike, for instance, to change its ways. A part of me believes that even creating a niche like that can bring change if a firm’s mission is really progressive.

But knowing that the company has bullied its workers, and that sexism pervades from the ad department up through the office of the CEO, it becomes clear that American Apparel is different only in degree, not kind, from its competitors.

1) American Apparel was not charged with any labor violations as a result of the complaint that UNITE filed with the National Labor Relations Board. As part of a no-contest settlement, the company voluntarily posted a notice informing workers that it would not interfere with their rights to organize.

2) The quotes from Jane magazine are incorrect; they were sourced from an article in NYU’s student paper, Washington Square News. The Jane article is now available online. The domestic violence quote appeared in the Concordia University student paper, The Link. According to Charney, he never spoke to the reporter from The Link.

We regret these errors.