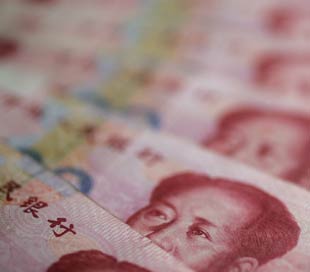 China’s decision to revalue its currency upward by 2.1 percent and scrap its peg to the U.S. dollar in favor of a basket of currencies is sending rumbles through the global financial system.

This is the first change in the value of the renminbi (RMB), or yuan, since 1995, when its rate was set at 8.28 to the dollar. The change, announced on July 21, will raise the value of the RMB to 8.11 to the dollar and the People’s Bank of China (PBOC), China’s central bank, has said it will also allow the RMB to trade within a band of 0.3 percent for the first time.

Beijing has been subtly painting its decision as an accommodation of U.S. concerns that an undervalued RMB had caused the loss of 2.8 million American jobs and fueled a trade deficit of about $162 billion last year alone.

But its revaluation has been so timid that several economists say it will have little material impact on China’s continuing export boom, which continues to grow at about 12 percent a year, according to Chinese government reports.

“(Two percent) is too small to make a difference to trade or capital flows,” says Arthur Kroeber, managing editor of the China Economic Quarterly, a research and analysis firm in Beijing.

This is particularly true because China’s local value-added to exports has been calculated to be between 10 and 30 percent, according to the World Bank. Thus, even a 25 percent revaluation would raise prices of many Chinese exports by only about 2.5 to 8 percent.

“The essence of the policy they have left behind is a fixed rate,” says John Rutledge, a leading economist and former U.S. presidential advisor. “All they’ve done is replaced the dollar peg with a basket that shifts the peg more towards China’s real trading patterns.”

Kroeber says the timing to the revaluation indicates that Beijing and Washington are particularly interested in settling the political turmoil created by incessant demands for a revaluation of the RMB.

“(The announcement) comes just ahead of President Hu Jintao’s state visit to the United States this September, and it enables him to argue that China has now done its part in mitigating the huge U.S. trade deficit with China,” Kroeber says. “Politically, the move also enables the Bush Administration to declare victory in its two-year campaign of quiet persuasion on the currency issue [and] take the wind out of the sails of the ‘China-as-currency-manipulator’ argument.”

One reason the Bush administration would like to contain the revaluation issue is that it challenges the informal but effective system of global finance management that has emerged between the U.S. and Asian economies over the last 20 years.

“(China’s revaluation) may be the beginning of the unraveling of the so-called Bretton Woods II regime, a regime that has allowed until now the cheap financing of the U.S. ‘twin’ deficits (budget and trade),” Nouriel Roubini, an associate professor of economics at New York University’s Stern School of Business, wrote on the Wall Street Journal Web site on July 21.

Today, more than 30 nations, including Saudi Arabia, Taiwan and Hong Kong, are part of Bretton Woods II, and have their exchange rates pegged to the U.S. dollar. Essentially, the system allows these nations to maintain current account surpluses, as long as their surplus is recycled back into funding the U.S. current budget deficit, which was $415 billion last year alone.

What holds the agreement in place is an understanding that the U.S. Federal Reserve will produce enough money supply to stimulate spending with U.S. consumers, who will then buy Asian-made clothes and home theatre systems (or Saudi oil) via the “fixed” exchange rate. The Asian countries will then invest their earning into U.S. T-bills-in other words, lending it back to the United States so that the cycle can repeat itself over and over again.

China currently holds about $250 billion of the United States’ total national debt of $7.8 trillion, $4 trillion of which is in tradable bonds. That’s second only to Japan, which holds $685 billion. If the imperatives for China to buy U.S. debt fade, the United States may have to push up the interest rate on T-bills, raising interest rates. Speculators have already driven U.S. government bonds to drop after China’s announcement, with the yield on the 10-year note rising 0.11 percentage points, to 4.27 percent. That’s up from 4 percent in May when Chinese and Japanese investors bought some $60 billion of U.S. securities.

Such upward revaluations in Asian currencies, which seemed like a grand solution to the U.S. trade deficit, “will translate directly into higher mortgage rates for American home owners, and it accelerates the end of the great American real estate boom by pushing home prices lower,” Rutledge says. “Essentially, the yuan revaluation amounts to a massive transfer of wealth, measured in home values and stock market values, from home owners to a small number of (U.S.) textile and other companies.”

Rutledge says China’s decision to move to a managed float will also open the RMB to attacks from currency speculators.

“Managed floats are a disaster because they attract speculators like blood attracts sharks,” Rutledge notes. “Once a government shows it is willing to accommodate political pressures on its currency, the speculators will attack it. So the big celebration [on July 21, when Beijing announced its changes] was in George Soros’ office.”

Still, both the United States and China seem willing to temper, if not reconsider, the Bretton Woods II system, in the face of changing geo-political equations. In the United States, many are uncomfortable about making the country too dependent on China, which is increasingly challenging the United States on economic and security matters. Chinese General Zhu Chenghu’s recent comments that China would nuke the United States if it attacked China during a confrontation over Taiwan only amplified those concerns.

In China, a huge surplus and high savings are raising the specter of inflation. With Chinese leaders struggling to maintain their fraying legitimacy through sound economic performance, that could prove dangerous, and local journalists say they have been banned from writing about the revaluation. Political protests have been steadily rising over the past few years. In 2003, the country experienced more than 50,000 demonstrations over things as diverse as unpaid pensions, land seizures by the government and local corruption, according to reports from the Ministry of Public Security.

While Zhou Xiaochuan, the measured head of China’s central bank, has encouraged expectations of further appreciation in the RMB by calling the 2.1 percent rise an “initial adjustment,” President Hu Jintao and Premier Wen Jiabao are said to be against it. Their fear is that a strong RMB could create instability in both urban and rural areas, as a fall in exports would hurt job creation, and cheaper food imports could hit local farmers.

Kroeber, the Beijing-based analyst, says it could be years, even decades, before the RMB is allowed to fully float.

“It was never the goal of Chinese policy to ‘correct’ external imbalances by a revaluation,” Kroeber says. “The long term goal is a crawling peg, delivering some appreciation against the dollar, but this goal will be realized over 20 years or so. Those expecting further upward revaluations in the RMB in the near term will be disappointed.”

Yet, if the RMB’s appreciation successfully engineers a “soft landing” for China’s overheating economy and bloated monetary system, the country will have taken a critical step towards shoring up its rickety and corrupt financial system and turning itself into a global economic superpower.