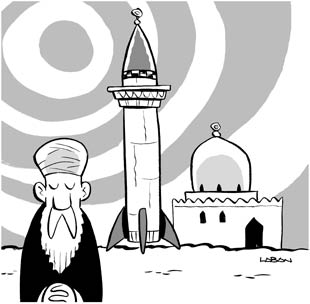 Give Iranian Nukes a Chance

In a mad world, the logic of MAD still works

On August 2, France, Britain and Germany announced that they might cut off negotiations with Iran and pursue punitive sanctions if the country followed through on its threats to resume its uranium enrichment program. The announcement came a day after the Washington Post reported that American intelligence agencies believe the country is a decade away from producing a nuclear weapon-an assessment that differs with earlier timetables cited by Bush administration officials, who estimated that Iran was only five years away from such a weapon. Responding to the Post story, State Department spokesman Tom Casey dismissed the divergent timetables, noting that both the United States and Europe have concluded that Iran’s nuclear ambitions pose “a threat for the entire international community.”

But are nuclear arms in the hands of Iran’s rulers really a threat to international peace and security? To answer the question properly, one has to locate it in its political and ideological context.

Every power structure has to rely on an underlying implicit threat, i.e. whatever the oficial democratic rules and legal constraints may be, we can ultimately do whatever we want to you. In the 20th century, however, the nature of this link between power and the invisible threat that sustains it changed. Existing power structures no longer relied on their own fantasmatic projection of a potential, invisible threat in order to secure the hold over their subjects. Rather, the threat was externalized, displaced onto an Outside Enemy. It became the invisible (and, for that reason, all-powerful and omni-present) threat of this enemy that legitimized the existing power structure’s permanent state of emergency. Fascists invoked the threat of the Jewish conspiracy, Stalinists the threat of the class enemy, Americans the threat of Communism-all the way up to today’s “war on terror.” The threats posed by such an invisible enemy legitimizes the logic of the preemptive strike. Precisely because the threat is virtual, one cannot afford to wait for it to come. Rather, one must strike in advance, before it is too late. In other words, the omni-present invisible threat of Terror legitimizes the all too visible protective measures of defense-which, of course, are what pose the true threat to democracy and human rights (e.g., the London police’s recent execution of the innocent Brazilian electrician, Jean Charles de Menezes).

Classic power functioned as a threat that operated precisely by never actualizing itself, by always remaining a threatening gesture. Such functioning reached its climax in the Cold War, when the threat of mutual nuclear destruction had to remain a threat. With the “war on terror”, the invisible threat causes the incessant actualization, not of the threat itself, but, of the measures against the threat. The nuclear strike had to remain the threat of a strike, while the threat of the terrorist strike triggers the endless series of preemptive strikes against potential terrorists. We are thus passing from the logic of MAD (Mutually Assured Destruction) to a logic in which ONE SOLE MADMAN runs the entire show and is allowed to enact its paranoia. The power that presents itself as always being under threat, living in mortal danger, and thus merely defending itself, is the most dangerous kind of power-the very model of the Nietzschean ressentiment and moralistic hypocrisy. And indeed, it was Nietzsche himself who, more than a century ago, in Daybreak, provided the best analysis of the false moral premises of today’s “war on terror”:

No government admits any more that it keeps an army to satisfy occasionally the desire for conquest. Rather, the army is supposed to serve for defense, and one invokes the morality that approves of self-defense. But this implies one’s own morality and the neighbor’s immorality; for the neighbor must be thought of as eager to attack and conquer if our state must think of means of self-defense. Moreover, the reasons we give for requiring an army imply that our neighbor, who denies the desire for conquest just as much as our own state, and who, for his part, also keeps an army only for reasons of self-defense, is a hypocrite and a cunning criminal who would like nothing better than to overpower a harmless and awkward victim without any fight. Thus all states are now ranged against each other: they presuppose their neighbor’s bad disposition and their own good disposition. This presupposition, however, is inhumane, as bad as war and worse. At bottom, indeed, it is itself the challenge and the cause of wars, because as I have said, it attributes immorality to the neighbor and thus provokes a hostile disposition and act. We must abjure the doctrine of the army as a means of self-defense just as completely as the desire for conquests.

Is not the ongoing “war on terror” proof that “terror” is the antagonistic Other of democracy-the point at which democracy’s plural options turn into a singular antagonism? Or, as we so often hear, “In the face of the terrorist threat, we must all come together and forget our petty differences.” More pointedly, the difference between the “war on terror” with previous 20th century worldwide struggles such as the Cold War is that the enemy used to be clearly identified with the actually existing Communist empire, whereas today the terrorist threat is inherently spectral, without a visible center. It is a little bit like the description of Linda Fiorentino’s character in The Last Seduction: “Most people have a dark side … she had nothing else.” Most regimes have a dark oppressive spectral side … the terrorist threat has nothing else. The paradoxical result of this spectralization of the enemy is an unexpected reflexive reversal. In this world without a clearly identified enemy, it is the United States, the protector against the threat, that is emerging as the main enemy-much like in Agatha Christie’s Murder on the Orient-Express, where, since the entire group of suspects is the murderer, the victim himself (an evil millionaire) turns out to be the real criminal.

This background allows us to finally answer our initial question: Yes, nukes for Iran-and Noriega and Saddam to the Hague. It is crucial to see the link between these two demands. Why are Timothy Garton Ash, Michael Ignatieff and other internationalist liberals-who are otherwise full of pathetic praise for the Hague tribunal-silent about the idea to deliver Noriega and Saddam to the Hague? Why Milosevic and not Noriega? Why was there not even a public trial against Noriega? Was it because he would have disclosed his own CIA past, including how the United States condoned his participation in the murder of Omar Torrijos Herrera? In a similar way, Saddam’s regime was an abominable authoritarian state, guilty of many crimes, mostly toward its own people. However, one should note the strange but key fact that, when the U.S. representatives were enumerating Saddam’s evil deeds, they systematically omitted what was undoubtedly his greatest crime (in terms of human suffering and of violating international law): the aggression against Iran. Why? Because the United States and the majority of foreign states actively helped Iraq in this aggression. What’s more, the United States now plans to continue Saddam’s work of toppling the Iranian government.

As to Iran and nukes, the surprising fact is that the MAD logic still operates today: Why hasn’t the tension between India and Pakistan exploded into an all-out war? Because both sides are nuclear powers. Why have the Arab states not risked another attack on Israel? Because Israel is a nuclear power. So why should this MAD logic not work in the case of Iran? The standard counter-argument is that in Iran, Muslim fundamentalists are in power who may be tempted to nuke Israel. (Iran is the only large Arab state which not only does not diplomatically recognize Israel, but resolutely denies its right to exist as a state). Is, however, the Iranian regime really so “irrational”? Isn’t Pakistan, with its nuclear arms and its secret services’ ties to al-Qaeda, a much greater threat? Furthermore, two decades ago, Iran was brutally attacked by Iraq (with active U.S. support), so it has every right to feel threatened.

The last trump card of Western liberals is that nuclear weapons would help sustain the anti-democratic rulers in Iran, thus preventing a democratic revolution there. This argument got a boost a few months ago, with elections in Iraq and Palestine. Was perhaps Paul Wolfowitz correct after all? Isn’t there a chance that (Western) democracy may work and take roots in the Middle East, and that this unexpected process will change the coordinates of the entire Middle East? Isn’t the ultimate unresolvability of the Middle East conflict the fact that the anti-democratic Arab regimes need Israel as the figure of the Enemy that legitimizes their rule? Consequently, isn’t Bush merely accomplishing the work of Reagan? In the same way that Reagan was “naively” convinced that democracy would undermine Communism and that Communism would fall, thus proving all the skeptic specialists wrong, perhaps Bush will be proven right in his “naive” crusade for the democratization of the Middle East.

It is here that one approaches the crux of the matter: Such an optimistic reading relies on the problematic belief in a preestablished harmony between the global spread of multi-party Western democracy and the economic and geopolitical interests of the United States. It is precisely because this harmony can in no way be taken for granted that countries like Iran should possess nuclear arms to constrain the global hegemony of the United States.