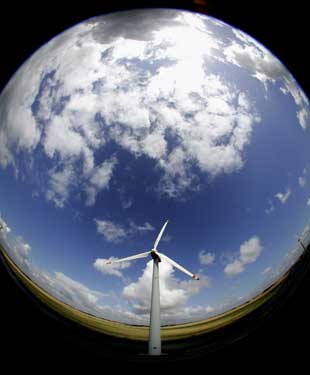 Shooting Down the Breeze

The company, FPL Energy, barred scientists from pursuing follow-up work, pulled their $75,000 contribution from the research cooperative studying bat mortality and ended the doctoral work of a graduate student who had produced two years of data showing unusually high rates of bat death at the sites.

The move stunned bat biologists and conservationists who had joined a cooperative scientific effort with the company. Known as the Bat and Wind Energy Cooperative, it is made up of industry members, government agencies and bat researchers. The group released a peer-reviewed study in June that estimated up to 2,900 bats died last fall at the farms in West Virginia and Pennsylvania.

The company’s decision rejected the study’s favored recommendation, which proposed shutting down selected turbines briefly at the sites to see if stationary blades would reduce bat fatalities.

“This is an argument on economics,” says Ed Arnett, a conservation scientist who directed the cooperative’s work, because halting some turbines for the bat study would marginally affect power production.

But the company may be even more concerned with the precedent the recommendation sets: If stopping blades during certain weather conditions and times of day dramatically cuts bat death, wind power companies could be forced to implement similar restrictions on other turbines in the region. About 700 turbines have been approved or proposed to be built in the mid-Atlantic.

FPL Energy spokesman Steve Stengel disputes that the company is stymieing research, noting that its contribution hinged on the type of research conducted, and that scientists were only offered access to the company’s property to pursue the approaches it supported. But bat biologists within and outside the research cooperative disparage the company’s solution–acoustic deterrents to drive bats away–saying that it’s unproven and potentially counterproductive.

“My judgment is that they really don’t want to know the answer,” says Tom Kunz, a bat biologist at Boston University who sits on the cooperative’s scientific advisory panel.

The controversy casts doubt on how wind power, championed as the greenest of renewable energy sources, will overcome a lack of public trust as it rapidly expands.

The environmental credentials of wind power are remarkable. Besides producing no air pollution or carbon dioxide, wind power does not clear forests, flood canyons, poison soil, or leave behind permanent or toxic waste.

“If we want to be around as long as other civilizations have lasted, we need to think ahead 1,000 years,” says James Manwell, director of the University of Massachusetts at Amherst’s Renewable Energy Research Laboratory. “And you can’t do it with coal, oil or nuclear.”

Currently, wind power is tiny in the United States, responsible for less than 1 percent of energy production. The nation has about 16,000 wind turbines producing enough electricity for 1.6 million households, according the American Wind Energy Association.

Since the days of homemade, backyard windmills, the technology of wind energy has advanced dramatically, with efficiency improving about 5 percent every year. New turbines can rise as tall as a 40-story building, produce power at wind speeds around 13 mph and generate as much as 4.5 megawatts of electricity–enough for 1,200 households.

Federal support for the industry is still dwarfed by the $18.4 billion in subsidies that the nonpartisan group Taxpayers for Common Sense estimates the coal, oil, gas and nuclear power industries will receive in the recently-signed energy bill. But thanks in part to a federal tax credit extended two more years by the energy bill, the industry is growing tremendously, by as much as a third this year alone. Some estimates predict it will produce 6 percent of the country’s power by 2020. The technology is decentralized–making it harder to attack or disrupt–viable across large swaths of the country and, with the tax credit, the most affordable way to produce renewable energy available today.

But despite this promise, wind power has been plagued by persistent problems with wildlife. While wildlife-impact studies have established no significant impact across swaths of the Midwest and West, the deaths of birds of prey at wind harvesting farms in northern California’s Altamont Pass have led to a lawsuit and negative publicity worldwide. An investigation into reports of bat deaths on an Oklahoma wind farm was quashed by FPL Energy’s research ban, and another site in Tennessee will also go unstudied.

With the growth of wind power, industry habits have emerged that trouble the scientists trying to understand why wildlife collide with turbines.

In August, researchers at England’s University of Birmingham released a survey of all wildlife-impact studies worldwide that hammered wind companies, saying they settle for poor-quality science and restrict access to their data on economic grounds.

“They’re used to working with consultants, so the industry owns the data,” says Jessica Kerns, the University of Maryland doctoral student whose degree was cut short. “It’s a kind of a rough position to be in. You never really know that the ground is solid underneath you.”

Some conservationists welcome wind’s consolidation. Jeff Miller is Bay Area wildlands coordinator for the Center for Biological Diversity, one of the groups suing wind companies in the Altamont Pass. He says some of the smallest companies have been most intransigent and that size matters less than recognition of larger environmental responsibility.”Companies that aren’t going to address this in their business plan aren’t going to survive out there,” he says.

The decisions of a few executives at these corporations dramatically affect the fortunes of wind power. One company, Winergy, set off panic along the Eastern seaboard when it announced plans–before meeting shoreline residents or policymakers–to install almost 3,000 offshore turbines. The company has yet to actually build anything, but its flurry of press releases was enough to prompt New Jersey to place a 15-month moratorium on offshore wind turbines.

Opposition to wind power has its predictable sources, like the Cato Institute, which receives part of its funding from oil companies, and Glenn Schleede, a former senior vice president for the National Coal Association, who has since moved on to a career as a freelance hitman set on whacking renewable energy sources.

But to the continuing delight of such foes, opposition also comes from environmentalists, whether the head of Maryland’s Audubon group or Robert Kennedy Jr., who has objected to plans for an offshore wind farm in Cape Cod, near the family’s summer house.

A common thread ties together the hell-bent ideologues and others who share such concerns as loss of views, open space or wildlife. Both sides include locals who weren’t consulted, and don’t like the idea of outsiders, especially faceless companies, profiting from their land.

“Until the anti-wind people are as concerned about mountain-top removal, natural gas pipelines that go up and over mountains, acid rain, code-red smog days and asthma,” he says, “they just don’t have a lot of credibility.”

Whether or not wind opponents act in good faith, their critique is bolstered by corporate decisions that are perceived to place revenue over other values.

Denmark does it better

Wind power has developed as a vital part of communities elsewhere. The majority of Denmark’s wind turbines are community-held cooperatives. Some prohibit anyone who doesn’t live around the turbine from buying a share in the cooperative, preventing consolidation under outside ownership. Today, wind generates 18 percent of the country’s power and is expected to produce 50 percent by 2030.

But Denmark is much different politically–and smaller geographically–than the United States, where long distances between the best wind-generating areas and big energy consumers hinder wind development. The Dakotas, for instance, have enough wind to generate one-third of the nation’s electricity, but lack transmission lines tying them to urban centers.

The problems raised by wind’s ownership, both economic and communal, have been labeled “small truths.” But if wind is the energy solution, they may become too large to bear. Legitimate or not, wind is being held to a higher standard, and if it appears to behave with the casual disregard of other, more entrenched industries, it may fail to fly.