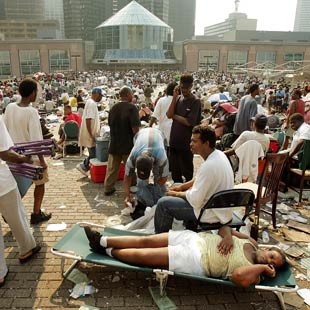 Stranded victims of Hurricane Katrina wait outside the Superdome to be evacuated.

White House Press Spokesman Scott McClellan told reporters in response to questions about the devastating havoc wreaked by Hurricane Katrina, “This is not a time for politics.”

But with New Orleans now underwater, hundreds–if not thousands–dead and tens of thousands in desperate need of food, shelter and water, the natural question is: What could the federal government have done to lessen this catastrophe? The answer is all about politics.

The Bush administration, having done its best to realize Grover Norquist’s dream of cutting government “to the size where we can drown it in the bathtub,” for days watched impotently as citizens of New Orleans were drowned. It is a disaster that is largely the consequence of the policy decisions that the White House has made over the past five years.

The faults of FEMA

The first defense was to plead ignorance. On September 1, President George W. Bush told “Good Morning America,” “I don’t think anybody anticipated the breach of the levees.”

Except Federal Emergency Management Agency (FEMA). In 2001 FEMA designated a major hurricane hitting New Orleans as one of the three “likeliest, most catastrophic disasters facing this county.” At the time, FEMA was headed by Bush’s former chief of staff in Texas, Joe Allbaugh, a self described political “heavy” who had no background in disaster relief.

With FEMA under Allbaugh’s watch, White House budget director Mitch Daniels announced in April 2001 the goal of privatizing much of FEMA’s work. As Allbaugh explained to Congress a month later, “Many are concerned that federal disaster assistance may have evolved into both an oversized entitlement program and a disincentive to effective state and local risk management. Expectations of when the federal government should be involved and the degree of involvement may have ballooned beyond what is an appropriate level.”

Allbaugh resigned in December 2002, announcing that he was going to seek his fortune by setting up a consulting firm that would help corporations hoping to do business in Iraq. His replacement, Michael Brown, also had no experience with disaster relief.

In March 2003, FEMA became a part of the Homeland Security Department and its emphasis shifted from dealing with natural disasters to potential terrorist attacks. Writing in the September 1 Washington Post, Eric Holdeman, emergency management director for King County, Washington, asked why “the country’s premier agency for dealing with such events [has been] systematically downgraded and all but dismantled by the Department of Homeland Security.”

Holdeman praised James Lee Witt, director of FEMA under Clinton, for “showing a serious regard for the cost of natural disasters in both economic impact and lives lost or disrupted.” In the ’90s, Witt had developed a plan for just such a New Orleans disaster that would have pre-deployed hospital ships and ships with pumps to remove water from the city. According to Knight Ridder, federal officials said a hospital ship was prepared to leave Baltimore on September 2–four days after the hurricane.

Why was the federal government so poorly prepared for a disaster on the Gulf Coast?

In June 2004, FEMA privatized its hurricane disaster plan for New Orleans, contracting the work to the Baton Rouge, La., firm Innovative Emergency Management (IEM) whose motto is “Managing Risk in a Complex World.”

IEM announced the contract on its Web site on June 3, 2004, trumpeting that the company “will lead the development of a catastrophic hurricane disaster plan for Southeast Louisiana and the City of New Orleans under a more than half a million dollar contract with the U.S. Department of Homeland Security/Federal Emergency Management Agency (FEMA).” But in the days after Katrina hit, the press release was removed from the company’s online press release archives, as China Mieville noted on the blog Lenin’s Tomb.

IEM Director of Homeland Security Wayne Thomas told the magazine Biz New Orleans, “Given this area’s vulnerability, unique geographic location and elevation, and troubled escape routes, a plan that facilitates a rapid and effective hurricane response and recovery is critical. The IEM team’s approach to catastrophic planning meets the challenges associated with integrating multi-jurisdictional needs and capabilities into an effective plan for addressing catastrophic hurricane strikes, as well as man-made catastrophic events.”

As Mieville opined, “So, the IEM team’s approach isn’t to siphon off tax money, spout management shit, provide a demonstrably catastrophically inadequate plan, then fuck off like craven fucking caveworms and hide the evidence when the fucking corpses start piling up?”

For years, Louisiana and the Army Corps of Engineers have tried to get funding to shore up New Orleans’ levees.

On June 8, 2004, after the Army Corps of Engineers’ budget for levee construction in New Orleans had been cut severely, Walter Maestri, the emergency management chief of Jefferson Parish, told reporters, “It appears that the money has been moved in the president’s budget to handle homeland security and the war in Iraq, and I suppose that’s the price we pay.”

And pay they have.

According to Wonkette, a Washington D.C.-based blog, a source at the Environmental Protection Agency had this to say about flooded New Orleans:

“We’re naming it Lake George, ‘cause it’s his frickin’ fault. Have you seen all that data about the levee projects’ funding being cut over the past three years by the Prez, and the funding transferred to Iraq? The levee, as designed, might not have held back the surge from a direct Class 5 hit, but it certainly would not have crumbled on Monday night from saturation and scour erosion following a glancing blow from a Class 3. The failure was in a spot that had just been rebuilt, not yet compacted, not planted, and not armed (hardened with rock/concrete). The project should have been done two years ago, but the federal gov’t diverted 80 percent of the funding to Iraq. Other areas had settled by a few feet from their design specs, and the money to repair them was diverted to Iraq. … This was senseless, useless death caused not by nature but by budget decisions.”

Not every one is so pessimistic. When George Bush looks at New Orleans he sees a city half full. “The good news is–and it is hard for some to see it now–that out of this chaos is going to come a fantastic Gulf Coast, like it was before,” he told reporters on Friday. “Out of the rubble of Trent Lott’s house–the guy lost his entire house–there’s going to be a fantastic house. I look forward to sitting on the porch.”